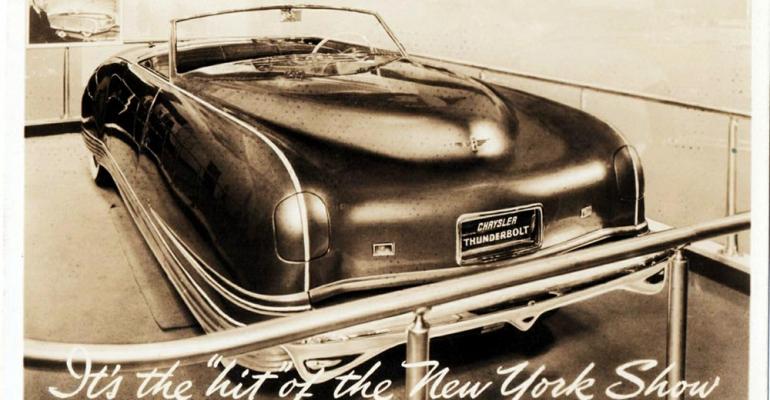 Opening Oct. 12 in New York City’s Grand Central Palace, the National Automobile Show will highlight the restyled ’41 models. “Attendees should expect to see cars that are longer than their equivalent predecessors of last year. Running boards have been eliminated in large numbers, so they are wider, with greater comfort than ever before.” Automakers have generally adopted the “torpedo” look introduced by General Motors in ’40, but with modifications that include more than a “hint” of the Lincoln Zephyr look.

Mechanical improvements are paced by Cadillac’s offering as an option the Hydra-Matic automatic transmission first introduced in ’40 Oldsmobiles and expanded use of Chrysler’s Fluid Drive semi-automatic transmission to now include Dodge cars as well as Chrysler and DeSoto models. Higher compression ratios increase horsepower and improve fuel economy, leading to the conclusion, “automobile powerplants are truly becoming high-compression engines.”

Also singled out for mention is Buick’s new-for-’41 Compound Carburetion system featuring two 2-bbl. carburetors, the second of which kicks in only when the driver requires full power from the 320-cid (5.2L) I-8 used in the Super, Century and Roadmaster models. Standard on the upscale models, the twin-carb. setup is optional on the lower-price Special’s smaller I-8 engine.

With Ford’s base Deluxe and upscale Custom ’41-model cars in full production, the automaker is reportedly readying the launch of a new entry-level series, possibly named Special, late this year. The new car will be less powerful, have lower-cost upholstery and less exterior trim. The goal, WAR says, is to better compete with the least costly Chevrolet and Plymouth variants. At $695, Ford’s business coupe currently is its lowest-priced ’41, but the price hits $720 when shipping is included. That compares with $712, including shipping, for the base Chevrolet and $685 for the base-model Plymouth, both of which Ford hopes to undercut.

Although automakers expect robust sales in 1941 as a result of increased purchasing power, falling unemployment and rising wages, uncertainty about world events and the negative impact of looming conscription are “clouding the crystal balls of industry watchers.” The impending military draft is expected to “remove a segment of purchasing that is bound to be felt,” a situation that could be made worse if banks and finance companies withhold, or severely limit, auto financing from all men of draft age. The latter is expected mostly to affect sales of used vehicles and the lowest-price new cars. However, to spur sales some finance companies are offering to refund payments, either in cash or as a credit against a future purchase, if the buyer is drafted during the course of the contact.

Car and truck production continues to be hampered by widespread strikes, many of them unauthorized, at supplier plants. Of particular concern is the walkout at Kelsey-Hayes, which ships wheels and brake components to GM, Ford and Chrysler plants, many of which have had to closed or postpone startup after reconversion to civilian output, due to the lack of parts. GM also is experiencing a shortage of wiring harnesses due to a strike at its Packard Electric division.

Top UAW-CIO executives are meeting with union-local leaders in an effort to end the wildcat strikes that are blamed for delaying the start of national contract bargaining for a 30% wage increase. Contract talks with GM, slated to open this month, may be delayed until November while the union focuses on ending local walkouts. GM’s UAW workers have voted 51.8% in favor of strike action if no national agreement can be reached.

Union efforts to bargain a 30% across-the-board pay hike appeared to be bolstered mid-month when economists on the government’s Reconversion Advisory Board said they believe a 24% wage increase could be absorbed without a price hike on finished vehicles. Automakers are hoping for clarification of the board’s position in President Truman’s upcoming address to the country on the government’s plans for the remainder of the reconversion period.

Reasons for optimism include the fact that “the great bulk” of the 4,528,000 trucks registered for use in the U.S. are at least five years old and many of them are nearly unserviceable due to heavy use during the war.

Some industry-watchers expect nearly the entire fleet will need to be replaced in the near term and undetermined number will have to be built for export to devastated post war countries.

Although many buyers might wish to delay purchases until more updated variants become available in model year ’47, the urgent need to replace dying vehicles will force them to buy sooner, the publication says.

Automakers may resort to cutting their dealer discounts if they end up caught between union demands for large pay increases and government price controls.

Although officials of the National Automobile Dealers Assn. have already protested such a move to the Office of Price Administration, Ward’s sees little chance of success on their part given that OPA has said dealer selling costs are minimal in the current “seller’s market” and their profit margins can be cut sharply without affecting their viability.

Car makers, on the other hand, face having to absorb not only their own wage hikes, but those of suppliers due to the fact price controls on components have been lifted while those on cars have not.

Lincoln’s Mark II luxury specialty car is set to bow late this month at a suggest retail price of $9,695 excluding shipping and taxes.

Calling the design “modern formal,” Ward’s says, “Superfluous ornamentation is avoided. The car is elegantly simple in silhouette and design.” It will powered by a 368-cid (6.0L) V-8 developing 285 hp.

Taking inspiration from the first-generation 1939-48 Continental, the new car features the “trademark” tire mount designed into the trunk lid, where it covers a centrally located angle-mounted spare tire. The interior features deep-pile carpeting, imported hand-tooled leather and a choice of six fabrics. Air conditioning, at $595, is the only option offered. Continental’s base price is nearly that of two standard Lincoln or Cadillac models.

American Motors has invested $21 million bringing its all-new ’56 Rambler to market, highlighted by its first 4-door hardtop body style. Although longer and lower than prior Ramblers, the 108-in. (2,743-mm) wheelbase ’56 models are still more than 18 ins. (457 mm) shorter overall than the “average” U.S. car. Thus they retain a maneuverability advantage in city driving and parking. The first all-new cars to be developed since the merger of Hudson and Nash, the Rambler line will be sold by dealers of both brands.

Volkswagen has climbed to top spot among the imports this year and reportedly is preparing to begin building its Type 1 (Beetle) cars at a plant in New Brunswick, NJ, acquired from Studebaker. Hoping to retain the top spot, VW has increased horsepower of its’56 models by 20% and added reclining front seats that also are wider, improved rear-seat legroom and “decluttered” the engine compartment. The 2-door sedan’s $1,525 base price is $30 higher than that of the ’55 variant.

According to Ward’s survey of factory-installed equipment installations in ’65-model U.S.-built cars, air conditioning is a “fast-growing item” installed in 23.3% of ’65 models. That’s up from a 17.9% rate in 64.

The Mexican government says it is increasing the output quotas for four of the country’s six existing automakers in 1966. Ford is to be allowed an additional 7,500 cars, Rambler (American Motors), 2,600 and Renault an additional 3,000 vehicles. Quotas for GM, Fabricas AutoMex (Chrysler) and Volkswagen remain unchanged. The newly established manufacturing arm of Germany’s Borgward is allocated 3,000 units.

In the U.S. for ’66, Volkswagen is introducing two variants of its Type III series already on sale in Europe. American buyers are being introduced the Fastback – “featuring the sloping rear roof design popularized by the Plymouth Barracuda, Mustang and AMC Marlin” – and the Squareback, a 2-door wagon. Both are powered by a rear-mounted, 65-hp, air-cooled H-4 engine that has a lower profile than the one in the Type I “Beetle.” This provides additional storage space above the powerplant, in addition to the front trunk.

Ongoing talks to reconcile differences between House and Senate budget bills are likely to retain the 10% federal luxury tax that would apply to cars priced over $30,000 as well as to other high-price items, according to WAR. That levy, as well a higher gasoline tax, are aimed at reducing the hefty federal budget deficit.

While the Senate bill calls for doubling the federal gasoline tax to 18.5 cents per gallon from the current 9 cents, the House version does not. GM, Ford and Chrysler are backing the general plan despite the higher taxes.

German automakers BMW and Mercedes, however, say the price at which the luxury tax kicks is too high, unfairly targeting their customers, whom, they say, buy their cars for technological superiority, not simple luxury. Jaguar tells Ward’s it has yet to determine the impact of the luxury tax on its sales, while Volvo says it will have a minimal impact since just 10% of its cars are sold at prices over $30,000.

California’s Air Resources Board has voted 8-0 to adopt stricter emissions standards. Among the requirements are a 56% reduction in hydrocarbon emissions starting in 1994 and the sale of electric cars beginning in 1998. A CARB official says diesels likely will not meet the new requirements, because the existing NOx waiver on those engines will end when the new rules go into effect. Meanwhile, New York has moved to adopt current California emission requirements with a 3-year phase-in beginning in 1993.

Beyond that, the automaker says it will abandon the entry-level market, boost overall transaction prices, concentrate on developing more high-performance, high-profit niche vehicles. It also plans to refocus its marketing toward buyers in their mid-30s earning $35,000 annually and away from those in their 20s making an average of $25,000. Current strategy changes come less than a decade after Nissan executives vowed the automaker would overtake Toyota in the U.S., but still trails second-place Honda by a significant margin.