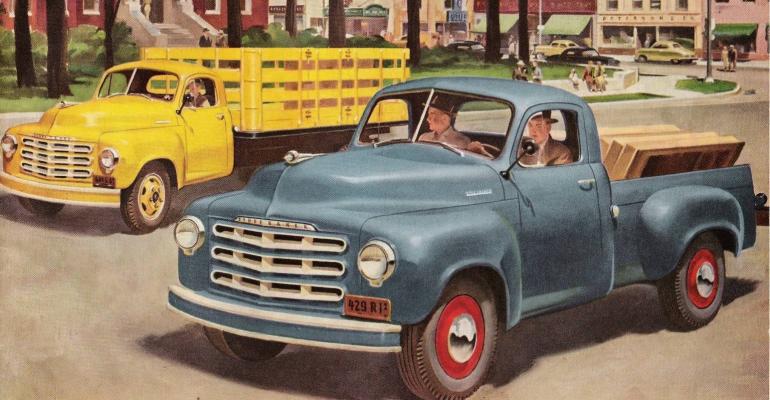 A May 12 UAW-CIO contract strike shuts down most Chrysler plants, closing some supplier facilities as well, while reducing output at others. The walkout affects 75,000 workers at the automaker along with more than 25,000 in the components industry. The strike comes after the union rejects an offer of $0.06 an hourly wage increase. The offer is far below the $0.30 hike originally sought as well as the union’s modified demand for a $0.17 jump. The strike is seen lasting last at least four weeks, says Ward’s Automotive Reports, with both sides expected to settle on an increase of  $0.10 hourly. A week later the newsletter says in its May 22 issue that the walkout may last longer than anticipated if Chrysler chooses to await the outcome of union bargaining at General Motors and Ford before making a new offer. However, Chrysler plants begin gearing up for an early-June re-start after the automaker accepts the terms of the 2-year pattern agreement signed with GM. That May 24 pact includes an $0.11 hourly gain and new annual cost-of-living adjustments.

​Kaiser-Frazer blames a production slowdown on the difficulty of recruiting workers for its Willow Run, MI, facility. The problem stems from the plant’s remote location from Detroit, according to WAR. A delay in training new-hires also is partly to blame. At the same time, construction is well under way on the $35,000 addition of a third floor to K-F’s administration building. The 12,000-sq.-ft. (1,115-sq.-m) expansion is expected to be completed in September.

Studebaker commences production of a heavily revised line of ’49-model trucks incorporating an all-new driver-orient cab with increased comfort. The new trucks are “attractive in the extreme,” says WAR, noting, “This basic appeal, together with many other practical improvements, particularly those evidenced in the novel cab design, should appreciably increase truck output totals.” Among the highlights are the absence of running boards, an effective heating and ventilation system and door-operated courtesy lights. New to the lineup are ¾-ton and 2-ton variants. Four wheelbase lengths are offered as are pickup, chassis-cab and stake-bed variants.

Although criticism of the “so-called upturned tail on the rear of the ’48 Cadillac, has been heard, especially in design circles,” the newsletter says it has apparently struck a chord with consumers. “Despite the adverse comments, the order backlog for this model continues to bulge upward to an amplitude that more than two years of prevailing productive effort could not reduce to a balance of supply with demand,” WAR notes. Even the most prejudiced critics would admit that the styling is at least distinctive, it says.

The latest industry reports confirm Studebaker dealers will have a new small car to sell in ’59. It is said to be based on a modified version of the existing Studebaker body that includes shorter front and rear overhangs as well as a shorter wheelbase. It reportedly will be priced lower than the entry-level 116-in. (2,946-mm) wheelbase ’58 Scotsman. The use of an aluminum intake manifold, cylinder head and transmission case are anticipated.

Some who have seen the ’59 Chevrolets call the styling “weird,” saying it is reminiscent of a spaceship and sure to attract younger buyers. At the same time, the division is said to be upgrading its top-of-the-line Nomad station wagon with more upscale interiors and a standard rear-facing third seat. It also will feature an electrically operated rear window that retracts into the tailgate in place of the traditional lift-up transom.

Ford’s Memphis, TN, assembly plant will close permanently on June 6, affecting some 1,300 workers. It is the latest iN a series of Ford plant closings this year that began with the Buffalo, NY, facility on Feb. 13, followed by the Somerville, MA, plant on March 14. However, the output capacity lost to the shutdowns (212,000 units in model year ’57) will be more than recouped when the nearly complete Lorain, OH, facility comes on-stream this summer. It will have an annual capacity of 236,000 vehicles.

In recession-year 1958, some 55% of U.S. new-car dealers are operating at a loss, according to a first-quarter survey by the National Automobile Dealers Assn. That compares to a “normal” rate of about 20%. Overall, dealers posted an average pre-tax loss equal to 0.8% of sales, says NADA, compared with a 1.4% profit in first-quarter 1957. Many dealers, according to the survey, depend on profits from service and parts operations to remain in business. Meanwhile, Chevrolet and Ford divisions will spend $6 million on dealer incentives to boost sales in May and June. The programs are the first major incentives for the two brands in the ’58 model year. The Ford program emphasizes payments to dealers, while the Chevy spiff is aimed targeted more toward sales personnel.

B.F. Goodrich and Uniroyal introduce new belted bias-ply tires, following Goodyear’s debut of similar tires as optional equipment on select ’68 cars. The new tires feature traditional bias-ply construction of polyester cord with the tread area reinforced by a fiberglass belt. Goodrich says the bias-belted tires have 40% more tread life than traditional tires, while improving ride and handling. They also yield a 7% improvement in fuel economy compared with 10% for radial tires. In the aftermarket, they are priced 25% more than bias-ply tires, but 15% less than radials. At the same time, Goodyear reveals it is testing low-profile variants of its Polyglas belted tires. The tread is said to up to 3-ins. (76-mm) wider than its standard belted tires and 1-in. (25-mm) wider than its widest current high performance tire. Carrying a sustained-speed rating of 139 mph (224 km/h) the tire is expected to be offered on some ’69-model muscle cars.

“General Motors will come out with a subcompact car if it decides this is one of the ways compete with imported cars,” opines WAR. That conclusion is drawn from a statement made by GM CEO James M. Roche at the May 24 annual shareholders meeting. In his comments, Roche tells the gathering, “New and better products, including all alternative ways to compete with imported cars, are under constant intensive study.” The executive also decries the lowering of import-car tariffs from 5.5% to 3.0% over a 5-year period under the latest international trade agreements while “discriminatory methods are used by other countries to keep out American cars.”

Ford will introduce a new rear-wheel antilock-brake system, popularly known as “skid control,” as an option on the ’69 Ford Thunderbird and Lincoln Continental Mark III. Developed in conjunction with Kelsey-Hayes, the Auto-Linear brake system, controlled by a small computer mounted below the glovebox, brings a Thunderbird test car to a straight-line panic stop on a road surfaced in vinyl and covered with soapy water. WAR says it is the latest application of mini-computers in cars that began in ’64 with Cadillac’s automatic temperature control air conditioning and includes Volkswagen’s new electronic fuel injection used on its Type 3 models.

What is a “young buyer?” Based on a study of option take rates for its 4-4-2 midsize muscle car, Oldsmobile says it is a person “who has a compelling interest in performance, but at the same time strongly appreciates automotive comfort.”  According to the Olds study, 95% of 4-4-2 buyers order the optional 400-cid (6.6L) V-8 with 4-bbl. carb and 40% select a 3- or 4-speed manual transmission. Some 80% specify power steering and bucket seats, while 50% favor an optional vinyl roof (coupes only) and the available “super stock” styled steel wheels. In addition, the 4-4-2 leads all other Olds models in the installation of 8-track tape players and AM-FM radios and ranks second only to the Toronado in the use of front disc brakes. However, just 44% of 4-4-2 buyers opt for air conditioning compared with 63% for the division overall.

Domestic Big Three and Japanese automakers continue seeking relief from California’s 1998 zero-emissions mandate that only can be met with electric vehicles. An automaker selling above a specified annual volume must sell ZEVs equaling 2% of its California tally. That rises to 10% in 2003. Individual car makers, as well as the American and Japanese automobile manufacturers associations, testify at California Air Resources Board hearings that consumers will not accept an EV with a driving range of 100 miles (161 km) at best, and will be priced at some $35,000 when it debuts in four years. Although CARB says its own and other studies indicate a large number of potential EV owners may be culled from people who travel less than 100 miles daily and are willing to pay $20,000-$30,000 for an EV, auto manufacturers say those conclusions are flawed. The Big Three say they are willing to foot the bill for an independent study of the viability of EV battery technology by 1998.

Chrysler is short of production capacity for nearly every vehicle it makes, Chairman and CEO Robert J. Eaton tells attendees at the company’s annual meeting. He says it has 30,000 Neon orders that it can’t fill this year and it has stopped accepting applications for Jeep-Eagle dealer franchises due to a shortage of Jeeps. Even though most plants are working overtime supply remains limited by engine-plant capacity constraints. The only vehicles not in short supply are the fullsize Dodge vans and the LH cars, Dodge Intrepid, Eagle Vision and Chrysler Concorde, New Yorker and LHS. In increasing the automaker’s quarterly dividend to $0.25 from $0.20, Eaton says, “Chrysler has never been in such a strong financial position as it is today.”

Honda says it is moving steadily ahead on its assembly plant in Mexico. The facility is expected to open in July with the capacity to build 15,000 Accord cars annually, mostly for the local market, although Honda is mulling an increase to 30,000 cars yearly. Some of the Mexico –made Accords may be exported to other South American markets, but none will be shipped to the U.S. or Canada. The plant, being built alongside Honda’s motorcycle facility in El Salto, Jalisco, initially will employ 250 workers in welding, painting, assembly and final-inspection operations.

Until U.S. car makers are selling at least 120,000 vehicles annually in Japan, Andrew Card, president of the American Automobile Manufacturers Assn., says the group will not be satisfied that Japan is bringing down trade barriers. The 120,000-unit level is not a call for a quota, says Card, adding “We are not looking for a guarantee that anyone will be buying our vehicles, we’re looking for a guarantee that the market is open.” There is no reason to believe cars made by the Big Three couldn’t eventually capture as much as 10% of the 6 million-unit Japanese market, the official says. Although he calls the Toyota/GM deal in which Toyota will buy 20,000 Chevy Cavaliers annually for sale under its own name and in its own dealerships, “tokenism,” he says the AAMA is not unhappy with the agreement.