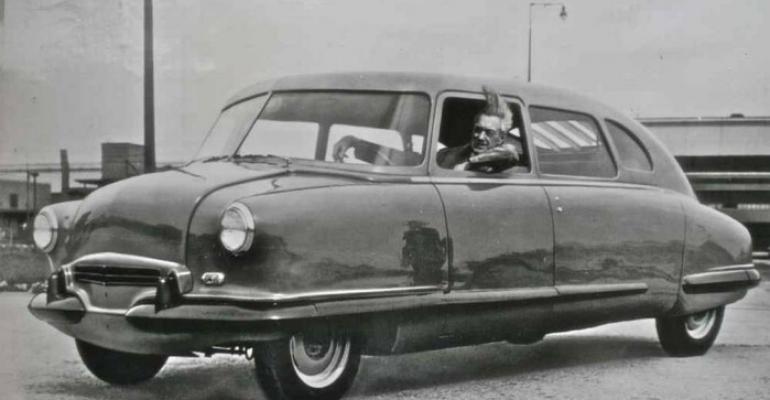 In its May 4, 1946, issue, Ward’s Automotive Reports offers details of a vehicle that has been appearing in newspapers as the “car of the future.” Dubbed the Stout Forty Six by its inventor, the car features a fiberglass body, rear-mounted 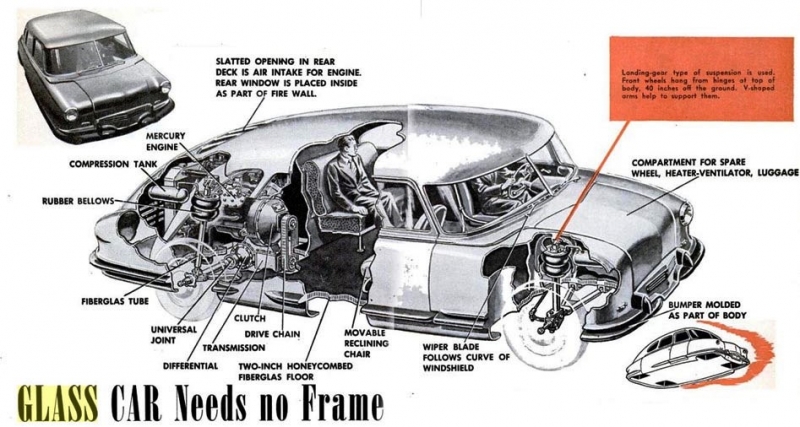 engine, no chassis or front axle, 4-wheel independent suspension and an interior designed as a room rather than a “riding compartment.”  Its engineering “obsoletes a large part of the traditional thinking that determines the present style of automobile design,” WAR says. The novel suspension, “cradling the body at four points, approximately at the level of the window sills,” is said to allow the bottom of the car to swing out on curves, permitting greater stability and safety at speed. Air cushions are used in place of conventional springs. There are no front and rear seats “in the usual sense,” the story points out. Rather there is a fixed driver’s seat and a bench seat at the rear of the 6-ft. (1.8 m) by 7 ft. (2.1 m) interior compartment that can be made up as sleeping berths ala a Pullman train car. Other free standing seats can be moved about as wanted.

Dwindling coal stocks due to the ongoing coal industry strike forces manufacturers to begin shuttering plants midmonth after the federal government orders a rail-freight embargo to conserve the scarce fuel. Although some automakers have the ability to carry on a bit longer with the supply of parts on hand, WAR says all assembly plants eventually will close, putting upwards of 500,000 of the estimated 700,000 auto-related manufacturing workers out of a job. It is expected some will remain on the job to make replacement parts. Although industry executives believe the government will pressure the coal workers to end their strike in the near future, the time it will take to refill the pipelines means the auto industry’s current June production schedules are unlikely to be met.

The president of Packard Motors says he foresees gas turbine engines powering cars within 10 to 15 years.  However, analysts are skeptical of that timeframe given the difficulties that need to be overcome to make the engine suitable for automotive use. Turbines currently used in aircraft and power generation applications are too bulky and inefficient for use in cars, necessitating a new approach. High rotational speeds, high temperatures and the need for extremely close tolerances are among the problems that must be overcome.

As the popularity of higher-priced aftermarket seat covers continues to rise, the seat-cover industry is forecast to reach a record $280 million in sales in 1956. In addition, more than 15 million seat-cover sets are expected to be sold by 1961. Among the hottest sellers, according to seat-cover makers, are made of clear plastic. These are being purchased in large numbers by new-car buyers seeking to preserve colorful new fabrics and designs now in vogue without covering them up.  Soon to be introduced are clear covers with metallic yarn that gives them a “luxurious” look. Women are said to be the driving force behind increased sales of the clear plastic covers.

A Ward’s survey shows factory installations of electric windshield wipers and windshield washers in first-quarter 1956 reached 24.8% and 46.4%, respectively, of industry output. Electric wipers are standard across the board at Chrysler, where all Chrysler-brand and De Soto models come with variable speed units, Dodge and Plymouth have standard single-speed wipers with variable-speed units an option. Neither Ford nor American Motors offer electric wipers. The advantage of electric wipers is they operate at uniform speeds regardless of the throttle position, whereas vacuum wipers tend to slowdown and/or stop the more the throttle is opened and available manifold vacuum is reduced. At the same time, the survey shows General Motors and Packard installed washers on just over 50% of January-March output compared with 45% at Ford, 33% at Chrysler and 22% at AMC. The windshield washer rates include both manual and electrically operated units.

With Goodyear, B.F. Goodrich, U.S. Rubber, Firestone and General Tire readying production of sylphon bellows-type air springs for ’58 cars, trucks and trailers, WAR asks if these suppliers “envision all of their customers going over to air-spring suspensions? GM, it says, appears to be “definitely sold that on the idea air springs represent an advance over current leaf, coil and torsion bar springing.” Cited advantages include a lower silhouette for cars and the ability for trucks and trailers to maintain a level stance regardless of the weight of load. The newsletter says the upcoming ’57 Cadillac Eldorado Brougham will be the first production car to use air springs.

Calling it the “Most modern automobile plant in the world,” General Motors officially opens the doors of its Lordstown, OH, assembly facility. Operated jointly by Chevrolet and Fisher Body, the plant’s 1.9 million sq.-ft. (178,516 sq.-m.) of “working space” will enable the eventual assembly of 19 variations of standard-size Chevrolet cars. Some 420 dealers in Maryland, New York, Ohio, Pennsylvania and West Virginia will be supplied from the Lordstown operation.

Commenting on hearings being conducted in Washington, a Chrysler executive says the government would be of value as a coordinator and not as director of automotive safety. Saying the engineering knowledge to improve cars lies with the auto industry, not the government, the Chrysler official claims, “The real danger would be setting such rigid standards, by mandating present theories and the present state of the art, that future progress will be impaired.”

“Want to buy a family vehicle for less than the price of car? Buy a truck,” says WAR. This includes, in addition to pickup trucks, small SUVs such as the Ford Bronco, International Harvester Scout and various Jeep vehicles, sales of which are expected reach 60,000 units or more in 1966. Pickups and utility vehicles are becoming accepted as family transportation, the story notes, in step with the growing trend toward recreational vehicle use.

GM’s upstart Saturn operation offers owners of 1,100 cars being recalled for possible engine problems a brand new ’91 model of equal value at no charge. In addition, about 700 unsold vehicles will be repurchased from dealers. The cooling systems of the recalled cars were filled with the wrong coolant and that could lead to improper cooling and eventual engine damage. Although the cars could be repaired, Saturn says it wants to show it will go beyond expectations to satisfy its customers.

Chrysler says its new Jeep plant being built in Detroit will open in mid-January 1992. Outside of the Bramalea, ON, Canada, plant acquired in its 1987 takeover of American Motors, the Detroit facility is Chrysler’s first all-new plant in 26 years. It will have an annual straight-time capacity of 175,000 units. Called Jefferson North, to avoid confusion with a former Chrysler assembly plant at an adjacent site, the facility will build the all-new ZJ Jeep Grand Cherokee. The new model is seen replacing the aging Jeep Cherokee built at the long-time Jeep site in Toledo, OH. Body panels for the ZJ will be sourced at Chrysler stamping plants in Warren and Sterling Heights, MI. The Jeep’s I-6 engine will come from the former AMC engine plants in Kenosha, WI. Although speculation claims the new plant dooms the one in Toledo, Chrysler says it plans to keep the Ohio facility open at least through 1997.

Based on WAR data, the Honda Accord, the country’s No.1 selling car in 1989-90, has recently become the country’s top-selling vehicle. Sales in January-March bested those of the second-place Chevrolet C/K pickup by 9,592 units. Ford F-Series pickup, the industry leader for 12 years through 1990, has slipped to third position, although the gap between it and the Chevy pickup narrowed in April.