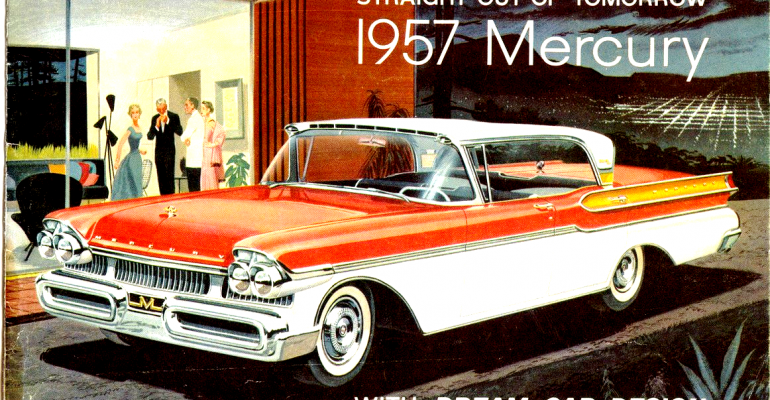 The recently settled General Motors strike that began in late November was costly for the automaker, according to Ward’s Automotive Reports. In addition to lost revenue and expenses associated with restarting the long-dormant plant machinery, automaker has permanently lost some of its component business as some customers move to multi-source parts previously supplied only by GM. Among those items are fuel pumps, electrical systems, control devices and bearings. The strike also benefited Chrysler and Ford in that each received large orders that likely would have gone to GM.

Both Plymouth and Dodge publicly introduce their revised ’46 models this month. Plymouth features “34 mechanical improvements,” according Chrysler. Among them are a color-coded speedometer that uses green to highlight speeds up to 30 mph (48 km/h), yellow for speeds of 31-50 mph (50-81 km/h) and red above that. Calling its lineup “substantially new” Dodge says it incorporates 60 design and engineering changes, including an improved hydraulic brake system, safety-rim wheels, color-coded speedometer and a return to aluminum pistons in place of iron-alloy units adopted during the ’42 model run due to material shortages.

Despite the absence of the Automobile Manufacturers Assn.-backed auto show in New York this year, consumer desire for all-new models has led to a divergence of opinion among industry watchers as to when the significantly redesigned ’47 models will be introduced, According to WAR, some analysts say the public’s desire for advanced styling and features is so strong automakers should be ready to launch them as soon as ’46-model sales begin to wane, possibly as early as this summer. Advocates site the “throngs” of consumers besieging recently opened Kaiser-Frazer showrooms, cash in hand, to buy the cars even though production has yet to begin and dealers have only pictures and specifications on display. Those on the other side of the issue say pent-up new-car demand still is so strong automakers need not introduce their revised model until calendar1947.

According to WAR, four headlamps soon may become the norm on U.S. cars. Systems of that type currently are under development jointly by automakers and headlamp suppliers. Such a move would require revision of laws in numerous states that now prohibit more than two headlamps, but that is not seen as a major obstacle. On the other hand, some manufacturers are seen resisting the rush to adopt 14-in. wheels and tires for ’57 models. Among them are Buick, Cadillac, Lincoln, Imperial and American Motors. The need to redesign brakes is seen a deterrent.

Amid rumors the Nash Statesman and Hudson Wasp will be dropped after this model year, American Motors has announced an all-new 190-hp V-8 engine for use in select Nash and Hudson models, as well as the Rambler cars being introduced this spring. Part of a 4-year, $11 million development program, the new 250-cid (4.1L) powerplant is engineered to enable future power increases in excess of 300 hp. It will be built 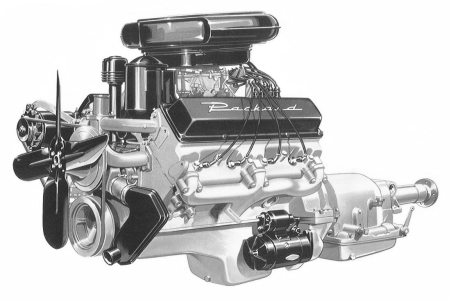 on a new line at the automaker’s Kenosha, WI, engine plant. Unofficial reports indicate a Rambler tested with the V-8 is capable of 0-60 mph (97 km/h) acceleration in 10 seconds. The new engine will be offered only with AMC’s Hydra-Matic-supplied “Flashomatic” transmission.

Factory-installed car radios were a $364 million business in record-production-year 1955, according to a WAR analysis. The study says car radios were installed in more than 5.6 million cars at the factory in 1955, up from 3.9 million in 1954. The study used an average retail cost for a factory-installed radio of $65. Gaining favor among car buyers is the automatic signal-seeking tuner that can be set to seek out the strongest radio signal in a given area. Pioneered in ’55 by Ford and Buick, signal seekers were installed in 14.5% of ’55 Ford-brand cars along with 16.2% of Buick’s upmarket Super and Roadmaster models and 2.1% of Century and Special variants. In ’56, Chrysler, Mercury and Pontiac are offing the option, with Chrysler one-upping competitors with the introduction of tubeless, all-transistor versions of the radio. Chrysler says the transistors provide greater power, a wider tone range, eliminate vibrator buzz and require less power to operate. In addition, they minimize the delay encountered in a tube-type radio between the time it is turned on until sound is heard after the tubes have warmed up.

AMC has begun a contest to come up with a name to describe its unit-construction car design. The contest is open to anyone outside the automaker with first prize being $25,000. Additional prizes include 40 ’56 Rambler cars, 100 Kelvinator home appliances and 999 other cash awards. If the winner of a car has bought a new AMC model during the contest period they receive double the value of the car they would have been awarded. Getting a trade-in appraisal at an AMC dealer during the contest earns an addition $1,000 to a car winner. Submissions cannot be more than four words and will be judged in part on the suitability of the name for promotional purposes.

The milestone 1.0 millionth Mustang rolls off the line at Ford’s Dearborn assembly plant during the week-ended March 7. Setting a new-car production record, Mustang achieves in less than two years what took Ford’s Falcon two years and 46 days to accomplish. Thanks to record-setting demand, employment has risen 20% at the three plants building the popular sporty car, Dearborn, Metuchen, NJ, and San Jose, CA, since the car’s March 10, 1964, launch. Based on an average selling price of $2,812, including $341 worth of options, the value of Mustang output so far amounts to an estimated $2.8 billion. Ford says the median age of Mustang buyers is 31 years compared with 42 years for standard Ford models. Those under 25 account for 28% on Mustang purchasers vs. just 3% of fullsize Fords. Also, 35% of “Mustangers” are single and 42% of them are women. Ford also notes more than 80% say appearance was the most important factor in their decision to buy a Mustang.

Studebaker says its 1965 net income rose to $10.7 million from $8.1 million in 1964, despite a 26.4% decline in revenue. Studebaker earnings, highest among the “independents,” were nearly double AMC’s 1965 profit of $5.2 million and also bested Kaiser-Jeep’s $4.9 million. Studebaker earnings would have been higher except for losses from the now-folded car division that ceased production in December. While no more cars are being built, the Studebaker says it is signing many former dealers as service centers to handle warranty issues and repair cars. In some 200 newspaper ads across the country this month, Studebaker also is reassuring owners there is $20 million stockpile of parts on hand to fixer their vehicles.

Chrysler says production of the aging Jeep Grand Wagoneer will end with the ’91 model run, likely in June. The luxury SUV was first introduced as the Wagoneer by Kaiser Jeep in 1963 alongside a similarly styled large pickup called Gladiator, output of which ended in 1988. Although the Wagoneer has been facelifted several times over the years, the basic body

configuration remains virtually unchanged. While still popular with some buyers, overall sales in 1990 fell 42.5%, to just 6,164 units. Daily output at the Toledo, OH, facility also will fall in May, but Chrysler hopes to regain lost momentum after output of the popular Wrangler is moved to Toledo from a small plant in Brampton, ON, Canada, for the ’92 run.

As a result of slowing U.S. auto sales, a glut of unsold import vehicles is backing up at port facilities, as already overstocked dealers refuse to accept any more units. The most significant problem cited by WAR is in Newark, NJ, where some 400 acres are being used to store 80,000 unsold vehicles. That is 23% more than is normal for this time of year. Among the actions being taken, those of Volkswagen appear to be the most drastic. The automaker has recently shipped 1,000 cars back to Germany and is contemplating sending back an additional 1,500 units. At the same time, Honda is storing 2,000 unsold Accords in fields adjacent to its Ohio assembly plant and Toyota is halting shipments of Camrys from Japan for two months.

GM confirms earlier reports it will end production of the slow-selling 2-passenger Buick Reatta coupe and convertible. Once the ’91 Reatta production run is completed, the Lansing, MI, plant where it is built will be converted to build the upcoming production version of the Impact electric concept car. Although no launch date has yet been announced, some analysts expect EV output to begin as soon as 1993. Sales of the virtually hand-built Reatta peaked at 7,905 in 1989, its first full year on the market, then fell to 6,599 in 1989. Only 423 have been sold in the first two months of 1991.

Despite meeting with Chrysler officials, including President Robert Lutz, Consumer Reports magazine is standing by its recommendation not to buy and Chrysler, Dodge or Plymouth vehicles equipped with the Ultradrive 4-speed electronically controlled automatic transmission. Of particular concern to Chrysler is the impact the warning may have on sales of minivans, its hottest-selling models. Saying earlier problems have been fixed, the automaker nevertheless is in the process of telephoning owners of Ultradrive-equipped vans to make sure they are satisfied with their vehicles. It also is waiving the $100 warranty deductible for Ultradrive-related problems. However, the controversy so far appears to have had negligible impact on Chrysler’s minivan sales that still accounted for more than half the market segment in recent months.