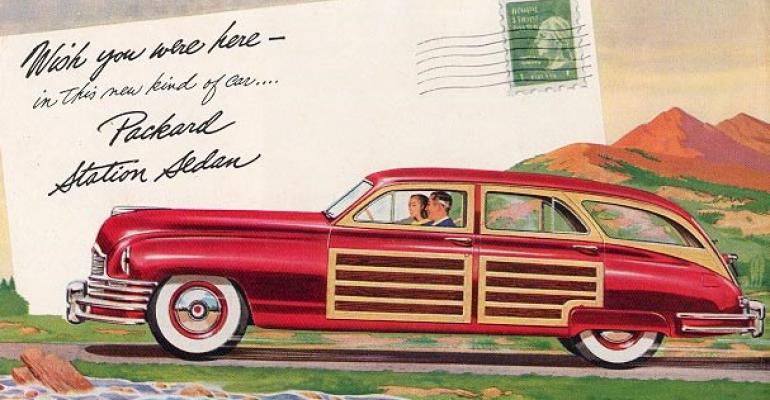 ​Nash-Kelvinator is set to commence production of its redesigned ’49-model Nash 600 and Ambassador on Sept. 7 with a public unveiling slated for October. Plants in Kenosha and Milwaukee, WI, will close July 30 for a 5-week changeover necessitated by new unibody construction. The cars are said to be longer, lower, wider and more aerodynamic than those they replace. The new bodies will offer more spacious interiors as well as a larger luggage compartment. The main body section will be similar on both cars, with a longer front-end, hence longer wheelbase, used to distinguish the upscale Ambassador.

According to Ward’s Automotive Reports’ production data, General Motors, Ford and Chrysler accounted for 90.1% of U.S. car output in 1941, the last full production year prior to WWII. But in the post-war period, the Big Three have seen their production share decline. In the first six months of 1948, for example, independents Crosley, Hudson, Kaiser-Frazer, Nash, Packard and Studebaker accounted for 22.2% of car output, up from 16.6% in entire 1947. Part of the post-war gain is the result of Kaiser-Frazer entering the car arena. K-F alone holds a 5.3% first-half share compared with 4.1% at year-end 1947. Ward’s also attributes post-war growth of the independent manufacturers in part to the ability to “more clearly foresee parts and materials shortages and stockpile needed components and/or take over sources of supply.” Packard’s dealer scrap drive, for example, is cited as giving it a leg up sourcing iron for use in engine blocks and other components. In addition, K-F and Hudson were among the first with all-new car designs.

Although automakers welcomed the recent settlement of the 38-day-old Detroit-area tool and die workers strike, other supplier labor issues continue to threaten vehicle output, WAR says in its July 26 issue. Among them are: 1) The Muskegon foundry strike that has output of some Ford heavy-duty trucks stalled for a second week; 2) The Campbell, Wyatt and Cannon walkout that already has forced Willys to halt output and threatens other manufacturers; 3) A work stoppage at Timken Axle that is seriously impairing  truck and bus output across the industry, but especially at GMC; 4) A walkout at Electric Autolite’s Bay Manufacturing division, a maker of “critically scarce” bakelite distributor caps and coil heads. That dispute threatens to shutter production lines at Chrysler, Hudson and Studebaker; 5) A strike at Monroe Auto Equipment that likely will result in short-term production disruptions across the industry as other suppliers prepare to take up the slack.

Ward’s forecasts U.S. production of ’58 cars will reach 4,234,000 units by the time the model run is completed in August. That represents a 32% decline from the 6,212,000 cars built in the ’57 run, and a 41% drop from the record 7,130,000 assembled in ’55. The newsletter tells readers that based on historical trends the ’58 downturn foreshadows a strong comeback in the ’59 model year. However, not all manufacturers are suffering to the same degree, especially American Motors, which is forecast to build 162% of its’57 volume. In contrast, GM is expected to build only 76% of its prior-year tally with Studebaker-Packard operating at 70%, Ford at 60% and Chrysler at 54%.

The number of domestic-make retail sales franchises declined 3.3% between Jan. 1, 1957, and June 30, 1958, based on a Ward’s dealer survey. The number fell to 52,850 from 55,660, despite increases of 26% at American Motors, 7% at Studebaker-Packard and 1,000 new Edsel franchises. The count includes some 700 AMC dealers dualed with a GM, Ford or Chrysler outlet. S-P’s franchise count includes 600 Mercedes-Benz outlets and 200 dualed with a Big Three make. Plymouth suffered the largest decline, but that was due in part to a move by Chrysler to establish exclusive outlets. Most Plymouth franchises traditionally have been dualed with other Chrysler brands, mainly Dodge. Plymouth now has 200 exclusives and Dodge has 300. DeSoto and Chrysler franchise exclusives are “few and far between.”

Owners of ’57 Ford and Chevrolet cars are expected to spend $1 million in 1958 on aftermarket kits to update their dual headlamps to quad-light systems like those that have been adopted nearly across the board in ’58. The forecast comes from headlamp manufacturer C.M. Hall that makes conversion kits sold through mail order catalogues, auto parts stores, repair shops and other outlets.

Demand for electric windshield wipers is increasing with more models likely to make them standard in ’59. A WAR survey indicates 38.2% of ’58 cars built in the model run through June were so equipped compared with 29.5% in ’57 and 25.5% in ’56. The take rate for windshield washers, on the other hand, has declined to 32.6% in ’58 from 35.0% in ’57 and 35.5% in ’56. However, the newsletter says “Although only 32.6% of new cars have factory-installed windshield washers, dealers reportedly are installing them in sufficient number to boost the overall rate to more than 50%.” A significant factor seen in boosting interest in washers in ’59 is a continuing move away from an easily broken glass reservoir bottle to a plastic bag-like fluid container.

Although Ford Div. General Manager James O. Wright tells the sales Executive Club of New York, “Ford Motor Co. will not build a small car in this country for some time, if at all,” supplier sources indicate the Dearborn automaker has placed “rush” orders for tooling to build a new, smaller, water-cooled in-line 6-cyl. engine. The 144-cid (2.4L) powerplant, rated at up to 125 hp, is slated be built at Ford’s Lima, OH, engine plant. Insiders say the automaker will begin building the engine in July 1959, in time for the production launch of a compact car in August. At the same time, archrival Chevrolet now is tooling an air-cooled H-6 engine to be mounted at the rear of a new small car it hopes to launch in July or August 1959.

TECHNA, Ford’s latest concept car, features a number of innovations, including a structural-glass windshield that eliminates the A-pillars for improved visibility and a 1-piece hinged front end that provides easy access to the engine. The car is 209.7 ins. (5,326 mm) long, 80 ins. (2,032 mm) wide and 51.2 ins. (1,300 mm) high. It rides on a 120-in (3,048-mm) wheelbase and seats six. The engine and transmission are located further forward and angled to connect with an off-center driveline that results in a small floor tunnel located between the driver and center occupant, providing increased foot room. Other innovations include a fixed front seat with movable controls and adjustable toe board. The automatic transmission is controlled by an electrically operated ring that also prevents opening the doors or trunk when any drive gear is engaged. Power-operated doors eliminate traditional handles, while a screen in the instrument panel displays 16 messages, including warnings for coolant level, transmission temperature, battery level, low washer-fluid and burned-out exterior lights. Among the car’s other features are an electronic speedometer and odometer, trunk-mounted air purifier and radio, the latter with remote controls in the armrest and an electric “quick-heat” feature.  In addition, the doors open straight out instead of swinging on hinges.

Plymouth’s Road Runner performance car is sizzling even as its companion Dodge Coronet Super Bee fizzles. In the ’68 model year through June, 45,000 Road Runners have been built and 32,000 have been sold compared with Super Bee production and sales of 7,841 and 4,878 units, respectively. Although both are similarly equipped with a standard 383-cid (6.3L) V-8, manual transmission and other items such as heavy-duty brakes and suspension, WAR attributes Road Runner’s success to its tie-in with the popular Warner Bros.’ cartoon character of the same name. The Gallup-Robinson national polling company says Plymouth’s two 1-minute advertisements for the car score among its highest ratings in viewer-retention. Road Runner began the model run based on the low-end Belvedere coupe fitted with high-performance equipment suited to enthusiasts on a budget. With popularity soaring, a 2-door hardtop was added later and a convertible is slated for model year ’69.

“The carburetor as we know it remains relatively unchallenged as the most efficient and economical method of mixing fuel and air for auto engines,” opines WAR. Although fuel injection-systems and computer-controlled fuel-air mixing devices are creeping up on the carburetor, the prospect of a ready replacement is not yet imminent, the newsletter says. Micro-circuit control of fuel-air mixtures also seems remote at the present time, say carburetor manufacturers. “While the computer-controlled FI system introduced by Volkswagen a short time ago stirred momentary excitement and is being studied, the prospect seems limited at present for such a system in the U.S.”

Ford will begin testing later this year new electronic controls that it says are forerunners of automated highway systems. The automaker’s Automated Highway Control is a computer-controlled brake and throttle device that in addition to maintaining a set speed will accelerate or brake the car to keep a specified distance from the car ahead. The Minigap system electronically links several cars in a caravan with tight spacing maintained electronically.

A “well-placed” Cadillac insider says the division is not interested in joining the SUV market. This, despite Mercedes having entered the field and reports that Lexus and other luxury-car makers are developing similar models. The Cadillac source says “our research says there’s a definite price-related cut-off point with SUVs, and once you get beyond that, demand would be small. It just wouldn’t support a lot of players.” With high-end Chevy Suburban variants approaching $40,000, the source tells WAR he believes GM has little to gain from offering a Cadillac alternative or a badge-engineered version of the Suburban. Cadillac also believes the SUV market may top out in two years, making such a model superfluous. “Its just not an area we’d like to be forced into. Cadillac would rather spend the money on something new and dynamic.”

In a Ward’s interview, GM Executive Vice President J. Michael Losh says the automaker will expand its “value pricing” concept for model year ’95 to bring in more retail buyers and help it recover lost market share. Launched a year ago, “value pricing” has made GM more competitive in the retail area, the executive says, although it has yet to rebuild market share. Prices of ’95 models are increasing a sales-weighted average of 2.5%, or $494, about half of which is due to installation of new or additional airbags and more sophisticated emissions controls. The remainder is attributed to rising materials and manufacturing costs. On average, car prices are up 2.9%, or $539, while light trucks rise 2.0%, or $414. Losh also says the industry’s light-truck market share will continue to rise, but eventually peak in the low-40% range. Tougher safety and emissions rules will hike truck prices and in concert with rising fuel prices make the vehicles less attractive to consumers. GM, he notes, is in the best position among the Big Three to weather a sales downturn because it has the lowest sales ratio of trucks to cars.

Chrysler insiders say the production launch of the new Chrysler Cirrus midsize car has been delayed from July 26 to Aug. 15 to address an array of problems. The difficulties range from “fit and finish” issues to glitches with the optional V-6 engine. Other sources indicate there may be problems with the brake system as well. By delaying Job One and vowing to make the JA its highest quality platform ever, Chrysler hopes to avoid the early recalls that plagued its Neon small car. Although the automaker says the Cirrus delays will not affect the Jan. 3, 1995, launch of the companion Dodge Stratus, WAR notes that officials recently have shied away from a specific launch date, saying only the Stratus will become available “this winter as planned.”