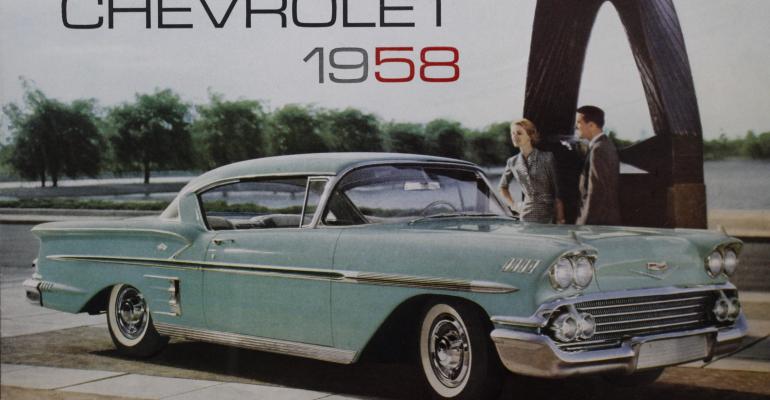 The majority of the all-new postwar cars now in the development stage will appear to the public as ’49 models, according to Ward’s Automotive Reports. Automakers are not in too much of a hurry to unveil their all-new offerings due to large order backlogs for existing vehicles that are expected to extend well into the ’48-model run. Hudson, Nash and Packard are exceptions as they sense the need to bring new models into the market before the planned push by General Motors, Ford and Chrysler. Packard is expected to be first out the door with restyled cars bowing early in January 1948. Buyers can expect more efficient V-8 engines in the industry’s redesigned models along with moisture-proof ignition systems derived from wartime work in developing moisture-proof distributors for aviation applications. Batteries and generators will have increased output to handle higher electrical demands brought about by increasing use of options such as power windows and seat regulators.

July output is hard-hit by a number of strikes. Although the strike by coal miners is resolved early in the month, its lingering effect on steel makers, electricity suppliers and others is still preventing automakers from achieving full output levels including periodic shutdowns of assembly plants. Following close on the heels of the coal strike is a walkout by workers at coach builder Murray. That walkout is seen as the opening salvo in a move to incorporate contract language that side-steps some provisions of the new Taft-Hartley labor law that the UAW-CIO feels is anti-union. The UAW also is pressing Ford, Murray’s largest customer, to adopt similar provisions during upcoming contract talks and will press both GM and Chrysler to modify existing contract terms. As the month ends, GM has lost one week of car production due to the Murray shutdown, with truck production also expected to be curtailed early in August. Ford is likely to be forced first to halt truck and Mercury car production in August due to lack of components. Unless labor peace is quickly restored, the industry’s ability to reach the 5 million vehicle assemblies forecast for 1947 appears in doubt. At the same time, production of station wagons at Chrysler is hampered by a strike at the vehicles’ wood-body supplier, while a walkout to protest the disciplinary layoff of a worker halts production of De Soto vehicles for three days. Meanwhile, a strike halts output at Hudson for two days late in the month, while Packard loses a half-day’s production due to a walkout at Briggs Mfg., its body supplier.

Automakers plan to build 510,500 cars in U.S. plants in July, according to WAR, a 13.7% increase on prior-year’s 448,876 assemblies. The gain comes largely in the low-price field where increased consumer demand is more than offsetting a slowdown in sales of medium- and high-price models. The robust July slate pushes planned third-quarter output to just under 1.3 million units, 23.6% ahead of the like-1956 tally. Based on a preliminary October-December slate of 1.5 million-plus assemblies, 2% less than the prior year, WAR says the industry is on track to turn out 6.2 million cars in the U.S. in entire 1957. That would be 7% more than in 1956, but would rank third-best behind the 1955’s record 7.9 million-plus units and 1950’s 6.7 million completions.

Production of Ford’s all-new medium-priced Edsel begins July 8 at plant in Somerville, MA; Mahwah, NJ; Louisville, KY, and San Jose, CA. Additionally, Edsel​ will be built in Wayne, MI, and Los Angeles commencing in August. Unlike earlier reports, Ward’s says the cars will use Ford body shells for lower-line models and Mercury bodies for high-line variants. Both are extensively modified with new fenders, quarter panels, hood and decklid. At the same time, the division has commenced signing dealers, with a goal of having 1,200 outlets on board at the time the car bows, tentatively in September.

Demand for seatbelts is falling. According to a WAR survey, belts were installed in just 2% of ’57 models built through June, compared with 3.5% in the complete ’56 model run when Ford, an attempt to promote seatbelts, offered them at below cost at a loss of $800,000. Despite increased safety awareness, Ward’s says consumers appear to be turned off by the “nuisance of strapping them on, especially for short trips.” Falling demand in the aftermarket has prompted many parts wholesalers and distributors to stop stocking seatbelts. On the other hand, the take rate for the padded instrument panel has increased to 30% overall in ’57, including rates approaching 100% in the high-price and luxury-car fields.

Production of “specialty” cars is soaring, WAR tells its readers. The preliminary tally for the entire ’67 model year is a record 1,189,000 units, a 36.5% increase from 870,754 in ’66. It marks the fourth consecutive record year for cars in this group that includes models in numerous price classes ranging from the Ford Mustang and Chevy Camaro to the Cadillac Eldorado and Oldsmobile Toronado. Although down 22.3% from the record 607,568 built in ’66, Mustang still tops the pack by a wide margin. Output of ’67 models totals 472,000 units, more than double the 220,000 second-place Camaros built in a shortened first-year production run. The Mercury Cougar nails down third place with 150,000 units, while the Pontiac Firebird, at 83,000, runs a strong fourth. Cougar and Firebird also are new entries in ’67. Despite a more stylish look, dwindling sales have trimmed production of the AMC Marlin to just 2,500 units in ’67, a second consecutive decline from first-year output of 10,000 in ’65. Ford has built some 1,761,000 Mustangs in the four model years the car has been in production.

Ward’s says it has learned Mexico’s Industry and Commerce Ministry is evaluating the possibility of seeking an automotive trade pact with the U.S. similar to that between the U.S. and Canada. If such an agreement is reached, “it could lead to the elimination of three existing Mexican assembly plants.” Meanwhile, the ICM says 1968 output quotas will be the same as those in 1966, or 116,500 units, an 8.7% reduction from this year. Also, no price increases will be allowed. In an effort to push automakers to exceed the 60% local-content requirement, the agency says it will allow manufacturers an additional 500-car allotment for each percentage point over the legal requirement. Additionally, it says it may also allow increases for component exports. All cars will have to adhere to a list of locally produced parts beginning in 1969.

Westinghouse will begin selling its electric minicar in August as it ramps up output to a 10-a-day rate by September. It says it has enough on hand to keep output rolling in 1968. Featuring aluminum-steel construction, the 2-passenger vehicle weighs 1,730 lbs. (785 kg), will travel up to 50 miles (81 km) and has a top speed of  25 mph (40 km/h).It is powered by 12 6-volt lead-acid batteries. At the same time, Ford says it is reaching the possibility of making an EV, possibly along the lines of the Comuta show car developed by its British subsidiary. The Comuta seats two adults and two children with a driving range of 40 miles (64 km) at 25 mph (40 km/h) and a top speed of 40 mph (64 km/h). Ford says its research may lead to the development of a gas-electric car with a small internal combustion engine for highway driving and charging the batteries. It would revert to electric operation at speeds common in cities, where smog is thickest. Meanwhile, General Electric says there is no truth to rumors that it plans to market an electric car. Some sources claimed GE was developing an EV styled similar to the Mustang that could travel 200 miles (322 km) on a single charge with a top speed of 90 mph (145 km/h).

Civil disorder in Detroit forces Chrysler to delay its’68-model output launch at three area plants for three days near the end of the month due to high absenteeism. Although in Detroit, Cadillac’s Clark Ave. plant lost no production because it was already down for model changeover. Output at Ford’s Dearborn plant and those of Pontiac and GMC in the city of Pontiac also experience production losses due to the 9 p.m.-5:30 a.m. curfew imposed by the Gov. George Romney to control public chaos.

revamped former American Motors plant in Bramalea, ON, Canada, on June 30. It marks the culmination of the automaker’s 39-month, $1.6 billion program to design, develop and build a new generation of sedans on a new front-drive platform – its first in a decade. The plant previously built the Renault-designed Eagle Premier and Dodge Monaco developed in conjunction with AMC prior to AMC’s acquisition by Chrysler in 1987.  Expanding the LH lineup, the Dodge Intrepid comes on line late this month followed by the Chrysler Concorde on Aug. 31. A new Chrysler New Yorker variant is set to bow in February 1993. Base prices begin at $15,930 for the Intrepid, $17,387 for the Vision and $18,341 for the Concorde.

Toyota may “badge-engineer” a version of its upcoming midsize pickup for GM, a Toyota insider tells WAR. As part of the deal, now being studied by Toyota’s board of directors, GM would supply a V-8 engine for both models. The Toyota pickup, slated to go on sale in November, will be built in Japan by Hino Motors, 10.3% owned by Toyota, commencing Aug. 31.

​Oldsmobile will use the name Aurora on its upcoming 4-door replacement for the 2-door Toronado, after getting permission to use the name that appeared on a 1990 Cadillac concept car. Although E-body Toronado output ends with the’92 run, Aurora is not set to bow until ’94. It will be built on a new G-body platform that will combine all of GM’s current C- and H-body models as well. Aurora will be built at the Orion Twp., MI, facility instead of Hamtramck, MI, leaving the latter to build only Cadillac models. Along with the Toronado, the large Custom Cruiser wagon will be absent from Olds’ ’93 lineup. There are no plans to replace the wagon.