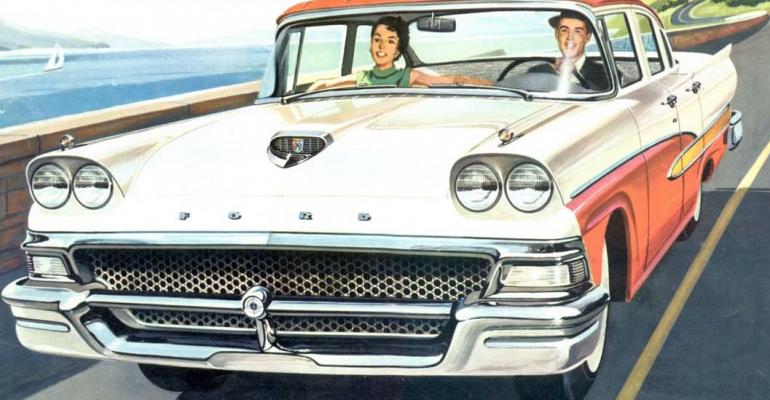 “The unanticipated novelty and extreme originality in the design of the distinctive Hudson has so jolted the industry that many of its competitors are scrapping tooling, especially body dies, for their ’49 models,” according to Ward’s Automotive Reports.  The styling of the all-new ’48-model Hudson has created “a virtual panic” in the design studios of competitive makes, says WAR. As a result, most of the all-new ’49s, or “really advanced post-war models,” will not appear at dealerships until late 1948, most likely in November or December. That is several months later earlier expected. An exception is Ford. The all-new Lincoln models are expected to be in volume output by early April, followed closely by the re-engineered Mercury. The all-new ’49 Fords are forecast to reach volume output in May. According to the newsletter, Ford likely was too far along in development to make significant changes and/or felt its designs were “quite satisfactory despite the impact of the radical Hudson on other manufacturers’ post-war designs.”

A successful scrap-iron drive by its dealers is credited for helping Packard maintain production in the face of a general industry shortage. Under the plan dealers receive one additional car above their scheduled allotment for each ton of scrap iron returned to the factory. Dealers are paid the prevailing price for the material that includes cylinder blocks, heads and similar items. So far, the drive has been active among dealers only in 12 sales zones in the East along with several in the Midwest. The Packard program has been so successful that WAR calls on other manufacturers to adopt similar scrap drives to help alleviate the shortage that threatens output of replacement parts as well as new vehicles.

A serious lack of petroleum supply and refining facilities along with distribution bottlenecks could see a return of gasoline rationing, bringing with it a “serious threat to the nation’s economy.” The large-scale post-war conversion from coal to oil for residential heating and industrial uses has exacerbated a shortage of petroleum products resulting from heavy war-time oil use along with the scaling back of prospecting for new oil reserves. The situation has resulted in numerous automatic assembly and supply plants shutting down in recent weeks due a lack of oil and natural gas sufficient to keep them operating. To help alleviate the situation, says WAR, “It is time for the automotive industry to take decisive steps to save the motor fuel wasted daily by the approximately 37 million vehicles operating on American roads.” Toward that end, Ward’s credits General Motors’ plans to replace current fuel-wasting engines with new variants using Kettering high-compression principles that promise a 40% fuel savings for engines of similar horsepower.

By a narrow margin, Ford Div. beat archrival Chevrolet for the top spot in U.S. car sales in 1957. Ford dealers sold 4,837 new cars on each of 307 selling days in the year for a total of 1,485,000 units, besting by 1.7% the 1,460,000 cars sold by Chevrolet. The win came despite Chevy’s fourth-quarter push that saw its dealers increase deliveries 8.4% above those of the third-quarter. Ford and Chevy combined accounted for 50.5% of all domestic-make new-car deliveries in 1957, WAR says.

In response to growing sales on imported economy cars, American Motors has relaunched the 100-in. (2,540-mm) wheelbase small car that it discontinued three years ago when the current 108-in. (2,743-mm) wheelbase Rambler and 117-in. (2,972-mm) Ambassador were introduced. Called Rambler American, the new car is powered by a 90-hp L-head I-6 engine. AMC says the $1,789 base Deluxe 2-door, 5-passenger sedan has the lowest advertised delivered price of any U.S. built ’58 car. The American also is available in upscale Super trim, while Fleet buyers may select a less-costly 2-door business sedan. According to AMC, the car will achieve 35 mpg (6.7L/100 km) with the optional overdrive added to the standard 3-speed manual gearbox. An automatic transmission also is available.

The much ballyhooed air-suspension systems offered as an option on nine ’58 car lines is not generating as much enthusiasm as was expected from consumers. “Air springs” were seen as offering a smoother ride and improved handling under all road and load conditions. At GM, installation rates range from 22% on Cadillacs, to 17% of Buicks, 10% of Oldsmobiles and just 5% of Chevrolets. Ford, which is just beginning to build cars with the system, forecasts a rate of just 2%-5% on Lincoln cars. Price, ranging from $214.90 at Cadillac and Oldsmobile to $123.75 at Chevy, is seen as the main reason for lower than expected demand. WAR points out that the cost of air suspension on a Chevrolet is more than that of power steering and power brakes combined, while an Olds buyers may opt for a 6-way power front seat and power windows for less cost.

Effective this month, GM has raised prices of most of its ’68 cars by $23 to cover the cost of the government-mandated installation of shoulder belts on cars manufactured after Jan. 1. Sources say AMC plans a similar move with Ford and Chrysler expected to follow suit. That likely will not be the last safety-related price hike as the federal government is planning to implement 12 additional safety proposals. The new mandates apply to the installation of head restraints, door locks, hood latches, ornamental exterior protrusions, windshield washer/wiper and defogging/defrosting, concealed headlamps and theft-deterrent systems. However, many of these won’t take effect until the ’69 and ’70 model years.

Dodge will soon introduce its companion to the popular high-performance Plymouth Road Runner. Called the Coronet Super Bee, it will feature a standard 383 cid (6.3L) V-8 in 2-door coupe or hardtop variants at $2,896 and $3,034, respectively.

Auto supplier Bendix sees electronics playing an increasingly important role in auto safety. One of these is the Bendix antilock brake system now being tested by several manufacturers. But it is not expected to reach the market until ’70 or later, at which time it will be an “expensive” option according to the supplier. Another Bendix system under development would automatically compensate for exterior environmental disturbances, such as the draft from a passing large truck or cross winds. Another Bendix innovation under development is a 4-wheel disc-brake system that incorporates a parking brake, making 4-wheel-discs feasible for wide-spread adoption.

Ford’s all-new midsize Torino convertible will pace the 52nd running of the Indianapolis 500 race on May 30. It marks the third time this decade a Ford has paced the race, beginning with a Thunderbird in 1961 followed by a Mustang in 1964. WAR notes that Ford-powered race cars are expected to dominate the entries again this year after powering the winner in each of the past three races. Ford engines were in 23 of the 33 cars competing in the 1967 event.

At the Detroit auto show, Chrysler unveils its all-new Dodge Ram large pickup, the vehicle’s first redesign in 22 years. On sale in the fall as a ’94 model, the new Ram will be offered in standard-cab, Club Cab (extended) and chassis-cab variants. They will be powered by a 3.9L V-6, 5.2- or 5.9L V-8s, or a 5.9L I-6 diesel. A V-10 will become available midway through the ’94 run. Rear-wheel ABS will be standard and 4-wheel ABS optional. In addition to the Warren, MI, assembly plant, the Ram will be produced in Toluca, Mexico. The Toluca plant will continue building the aging Ramcharger SUV for the Mexican market, although the vehicle is being phased out in the U.S. It possibly will be replaced in the future by a Dakota-based SUV.

Unexpectedly high demand for variants having standard antilock brakes has crimped its availability on Chrysler’s all-new LH cars, Chrysler Concord, Dodge Intrepid and Eagle Vision. Dealers say they have been told buyers cannot order cars equipped with ABS due to “a worldwide shortage.”  Consumers wanting ABS will either have to select from dealer stock or forego the option. While Chrysler also tells dealers, “unfortunately, this will not be short-term problem,” a company spokesman tells WAR the problem is “no big deal,” and may resolve itself after unexpectedly high initial demand for upscale models levels off. Meanwhile, Chrysler offers to replace 200 LH cars that were sold as having ABS when they did not have the device. Due to a mix-up at the Bramalea, ON, Canada, plant where the cars are built, 800 left the factory with window stickers indicating they were equipped with the optional extra when, in fact, they were not. The mistake was remedied on the remaining 600 units before the cars were sold.

Oldsmobile is targeting sales of 40,000-45,000 units annually for its all-new Aurora luxury sedan slated to hit the market in spring 1994 as a ’95 model. That volume is similar to the peak selling years for the division’s now-defunct Toronado luxury coupe. It will be powered exclusively by a new 4L V-8 derived from Cadillac’s Northstar engine. Significantly, Aurora does not display the Oldsmobile brand anywhere in an effort to de-emphasize a name that surveys indicate does not play well with import-car buyers at whom the car is aimed.