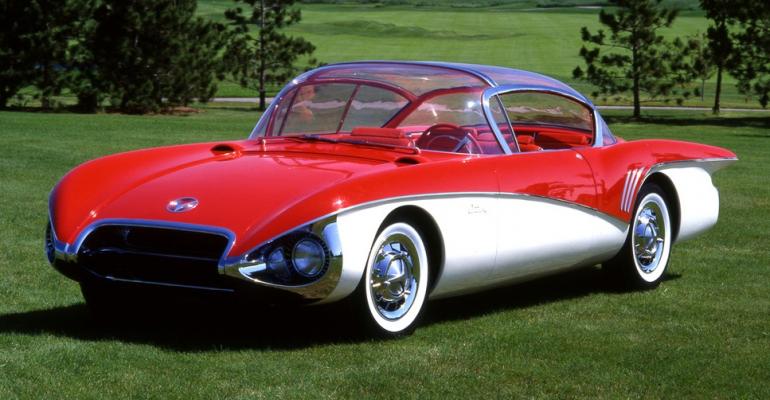 Packard plans to introduce this spring an all-new, smaller, 4-door sedan that will go on sale alongside its traditional models. Current plans call for production of 50,000 ’41 models, with the lineup eventually including a 2-door sedan as well as a 7-passenger 4-door variant. Among the car’s styling features are a wider body that better integrates the fender and eliminates exposed running boards. It also presents a new interpretation of the Packard’s traditional grille design. The car is expected to be offered with 6- and 8-cyl. engines.

The Automobile Manufacturers Assn. has cancelled plans for a National Auto Show in the fall, at which the ’42 models would have been officially unveiled. AMA says the move was due to the desire of the industry to “better establish itself in its rightful place in the public eye as a prime factor in the defense program.” Many smaller regional auto shows also may be in jeopardy as automakers cut funding and eliminate unique models built for such public gatherings. The larger “extravaganzas” are likely to be replaced in some areas by smaller dealer-sponsored events.

Buick is finalizing details of a new line of small cars built on a 118-in. (2,997-mm) wheelbase. They feature fastback styling that will be shared first with Oldsmobile and Pontiac and, later with Chevrolet. Powered by a small I-8 engine, Buick’s new car is expected to be priced closer to Pontiac and Olds rivals than any current car in the Flint automaker’s lineup.

Chrysler and Plymouth have taken the wraps off new high-performance cars with increased power and unique trim. The new Plymouth Fury, for example, sports a 240-hp 303-cid (5.0L) V-8 and comes with heavy-duty suspension and brakes. The exterior features a wide gold-anodized aluminum band on each side and a gold-color grille inlay. Fury will have “the most powerful engine in the ’56 ‘low–price’ field,” Ward’s says.

What one supplier terms “Oriental conservatism”, defined as “pleasantly, not excessively, colorful. Not overly bright,” is seen as the theme of colors to be used in the upcoming ’57 models. The industry already has begun to tone down colors on ’56 cars with one supplier explaining, “Blazing car colors are like rich cake. You can take so much and that’s it.” Model year ’55’s flashy “eye popping” colors like purple, lavender, pink, coral and magenta are now dropping in popularity, replaced by charcoal gray, bronze and gold. White and black, popular in two-tone combinations, also are on the rise. At the same time, three-tone paint schemes are declining, partly because a car must be designed for use of a 3-tone color scheme if it is to be “tasteful.” Suppliers also say they expect more ’57-model exterior colors to be blended to match interior fabrics as buyers become more “interior conscious” and it is easier to modify paint colors than it is to change the colors of dye used in fabric and vinyl.

One highlight of the just-concluded 48th annual Chicago Auto Show was Packard’s Predictor concept car. Among its unusual features are concealed headlamps, slatted roof sections over the driver and front passenger that open “like the cover of a roll-top desk.” The opening roof sections are designed to provide easier ingress and egress from the front seats. The car also sports a retractable rear window that lowers to provide flow-through ventilation. A daily stage show, incorporating some 100 performers, was used to help introduce the industry’s newest cars.

Hot on the heels of the Chicago show is the Jan.19, opening of GM’s latest Motorama in New York City. Among the concept cars being unveiled are the Chevrolet Impala, featuring a blue fiberglass body with brushed stainless steel top, a windshield wrapping into the roof and an instrument panel with retractable instruments. Also on tap is the Pontiac Club de Mer sports car with a brushed aluminum body, separate bubble-like windshields for driver and passenger, a rear “dorsal fin” and retractable headlamps. A unique feature of Buick’s Centurion is a rearview camera that replaces the traditional rearview mirror by projecting an image on an instrument panel screen. Oldsmobile’s Golden Rocket offers a folding steering wheel that doubles as a safety device as well as making it easier for the drive to enter or exit the car, while Cadillac’s Eldorado Brougham Town Car comes with a radio-telephone, woman’s vanity compartment, cigar humidor and a thermos bottle with glasses.

The first 2.0 million U.S. truck production year will occur in the near future, according to WAR. The publication forecasts 1966 output will best the record 1,780,000 trucks built in 1965, the industry’s fourth consecutive annual benchmark. The promising outlook is in part linked to robust production of medium- and heavy-duty units, especially by the independent manufacturers, most of whom start the year with heavy order backlogs. The newsletter also says the string of annual truck production records parallels the development of the $50 billion interstate highway system, only slightly more than 50% complete. An intense drive to finish the network as soon as possible bodes well for continued record truck output, it notes. At the same time, U.S. car production also set a record in 1965 of 9,329,366 units, a 20% gain on strike-hit 1964 and a 17% increase from the prior peak of 7,942,132 cars 10 years earlier.

BMC has unveiled its newest U.S. offering, the MGB GT, a 2+2 hatchback variant of the 2-passenger MGB convertible. Powered by a 98-hp I-4 engine, the 2-door GT features a lift-up rear hatch over a cargo area that offers 10 sq.-ft. (1 sq.-m) of space with the occasional-use rear seat folded.  Among the car’s standard features are wire wheels and leather upholstery. BMC forecasts the sale of 40,000 sports cars in the U.S. in 1966, including – in addition to the MGB and MGB GT – MG Midget, Austin Healey 3000 and Sprite and Austin Mini Cooper S.

All new cars sold in the U.S. will be required to have exhaust emissions control devices, according to the Dept. of Health, Education and Welfare. The standards are similar to, but more stringent than, those implemented by California effective with the ’66 model year. Automakers and other interested parties have 30 days in which to protest or suggest changes in the regulations.

The Internal Revenue Service is changing the classification of many SUVs to car from truck for tax purposes, reducing the federal excise levy on those vehicles. Included in the reclassification are roadster and wagon variants of Ford Bronco, International Harvester Scout and Jeep Universal. The lower tax rate prompts Ford and Jeep to lower retail prices between $57.47 and $73.88. IH has not yet announced price cuts. In addition, the Dodge A-100 Sportsman compact passenger van also has been changed reclassified as a car and subject to the lower excise tax, although it has been tallied in Dodge Dart car output for several years. On the other hand Jeep’s Wagoneer is unaffected by the change as it already was classified as a car.

Saturn says it will compensate its 58 dealers for losses incurred due to the delay in launching production of its small cars. Retailers will receive compensation of between $50,000 and $100,000 each in the form of reimbursement of fees already paid and/or forgiveness of money due the automaker. Output at the Spring Hill, TN, plant only recently reached 200 cars daily, putting full production about 45 days behind schedule. Due to the delay, Saturn has postponed opening an additional 30 dealers until April “at the earliest,” but still plans to have 125 active dealers by the end of 1991.

In addition to worrisome economic factors, concerns about the possible involvement of the U.S. in a Persian Gulf war over Iraq’s invasion of Kuwait may mean more first-quarter production cuts, as consumers hunker down. Mid-month indications are that January North America car production is running 14% below schedule, with cars down 7%. GM is running just 1% under its conservative January program, while Ford is 15% short of its more ambitious slate. Production cuts are forecast at Chrysler, where January output is 7% below plan. At the same time, automakers are beefing up security and cutting back travel due to rising fears of terrorist attacks.

Japanese government indicates it will extend the 2.3 million-unit cap of car exports to the U.S. for the 1991 fiscal year beginning April 1. In response, Ford President Harold Poling asks Japan to open talks aimed at reducing the $49 billion U.S. trade deficit to a more manageable $5 billion-$10 billion. Chrysler head Lee A. Iacocca calls the quota extension, “another meaningless gesture that exemplifies Japan’s total insensitivity to the economic problems America is now facing and the sacrifices it may soon be called on to make in an area of the world that supplies most of Japan’s oil needs.”

WAR says it has confirmed GM, Ford and Chrysler are close to signing an agreement on joint development of electric vehicles. Earlier efforts at forming a pact have been redoubled in light of California’s record mandate that 2% of sales in the not too distant future be emissions free. All three automakers agree the major hurdle is developing a battery that will allow EVs to travel long distances without having to be recharged.

GMC Truck and Bus Group launches production of the S-15-based Syclone sporty pickup at its Shreveport, LA, plant. Output is forecast at 10,000 units for model year ’91, with 2,000 sold orders already in hand. Syclone is powered by a turbocharged variant of GM’s 4.3L V-6 prepared at a nearby plant by supplier Production Automotive Services.  It is mated to a new version of the 4-speed Hydra-matic transmission that has been pulled ahead from the ’92-model Corvette sans the ’Vette’s electronic controls. As well as preparing the powertrain for shipment to Shreveport, PAS handles the final “dressing” of the completed vehicles, including installation of sport seats, emissions equipment and the air cleaner assembly.