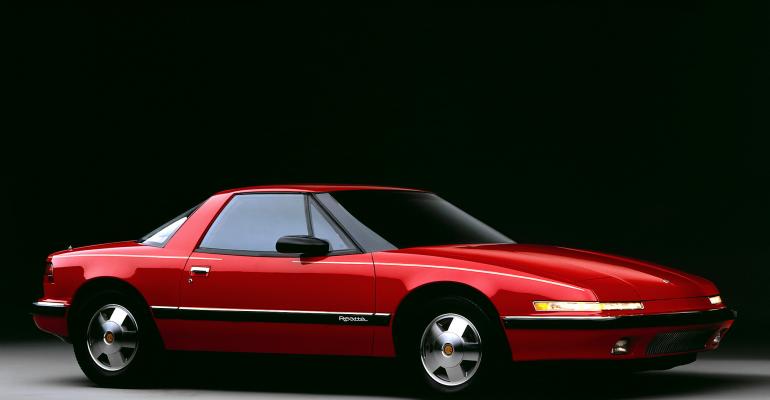 Ward's promotion of Depression-Era Cash-for-Clunkers plan, factory installed AM-FM transistor radios, and the debut of the Reatta (above) at the Detroit Auto Show highlight Januarys in automotive history, as covered by Ward's.

Vehicle production in the U.S. and Canada will top out at some 3.7 million in 1938, Wards Automotive Reports forecasts in its Jan. 1, 1938, newsletter. In The 1938 Outlook, WAR says the industry will build some 25% fewer vehicles this year despite an expected influx of “stripped” models and new, smaller, lower price cars “which will fit into the Willy’s price bracket or near it, below the Ford-Chevrolet-Plymouth class.” The ongoing recession, tighter credit and a glut of used cars are significant factors curtailing demand for new vehicles, the story points out.

At a U.S. Senate labor hearing Jan. 6, General Motors President W.S. Knudsen testifies that the late-1937 U.S. sales downturn, in which Dec. 11-20 deliveries fall to 45% of the prior-year level is “the most severe experienced in the history of General Motors.” At the same time, the Automobile Manufacturers Assn. testifies that despite slackening demand the U.S. auto industry employed a record average 517,000 workers in 1937, 16% more than in 1929, while hourly wages were 30% higher and auto prices, per pound, were 13% lower.

From the Jan. 15 issue of WAR, Hudson Motor Car Co. begins hiring 6,000 workers for production of its new, smaller, less costly Model 112. Hudson officials confidently forecast the new car, with a slightly smaller L-head I-6 engineand a 112-in. (2,848-mm) wheelbase, 5 ins. (127 mm) shorter than the company’s Terraplane series (on which much of it is based), will boost sagging sales. (But despite extensive cost-cutting, the “112” ends up $25-$45 more expensive than its Ford-Chevy-Plymouth competitors and Hudson’s 1938 production falls 54% to just 51,078 units. The Model 112 is discontinued after model year ’39.)

WAR also spotlights favorable industry reaction to its prior-week proposal to have the federal government buy up and scrap excess used-car inventory to help spur new-car demand. “It is conceded that cars of seven years’ age and older are not suited to present-day transportation, from standpoints of safety, efficiency and others.” Claiming dealers are holding an estimated 7,000,000 vehicles built prior to 1930 valued at $50 or less, the story says elimination of these units “…would be a hearty impetus to purchasing, besides its obvious advantage of cleaning up the car market of outmoded merchandise.”

Late-January sees the launch of GM’s new Detroit Diesel Engine Div. with 325 workers building 1-to-6-cyl. engines at a daily rate of 50 units. With locomotive production consolidated at LaGrange, IL, the Cleveland, OH, plant (a former Winton Engine Co. facility) will build medium-size engines, including marine and stationary power units, and will serve as division headquarters. A nation-wide dealer organization will sell engines directly to the public, while the Cleveland office will hand sales to manufacturers. Says WAR, “the day of the Diesel in passenger cars is still many years off, but their installation in trucks, farm machinery, road-building machinery and boats has barely arrived.”

"GM Plans Revolutionary Change in Automatic Transmissions" touts the headline story in WAR’s Jan. 14, 1963, issue that focuses on a new torque-converter type automatic to be introduced in Buick’s ’64 models. Large Olds, Pontiac and Cadillac cars will retain the fluid-coupling Hydra-Matic transmission for ’64, but change to the new units with the redesigned ’65s. Chevrolet already is using a torque-converter-type automatic gearbox. Pointing out that General Motors currently builds “more than 32 different automatic transmissions” WAR opines, “The above trend towards standardization, with the Hydra-Matic perhaps in a slow fade-out on cars would not from that standpoint be unwelcome.” Of the more than 30,000,000 automatics built by GM since the Hydra-Matic’s 1940 inception, 17,000,000 are of the torque converter type and 13,000,000 the fluid-coupling design, the story says.

Some 48.4% of the 744,900 salaried and hourly workers employed by GM, Ford and Chrysler worked at facilities in Michigan in 1962. Michigan facilities accounted for 43.7% of GM’s total workforce compared with 51.7% at Ford and 67.9% at Chrysler. Including American Motors and Studebaker, nationwide auto manufacturing employment among the OEMs fell just short of 800,000 at the end of 1962.

This month sees the introduction of the first  all-transistor AM-FM radio as a factory-installed option in two car lines, Chrysler and Plymouth. Chevy will offer a radio with frequency modulation in standard-size models in February and in the Corvette in April.

Ford is preparing several new optional V-8s for mid-year introduction including a 427 CID engine, “the most powerful engine the company has yet produced,” for use in its large cars, plus a 260 CID V-8 for the compact Falcon and a 289 CID variant for the midsize Fairlane. Meanwhile, despite the pending introduction of an optional V-8 in its Classic lineup, American Motors says it continues to disagree that “it is desirable to glamorize horsepower and speed through participation in competitive stock car racing.”

Amid forecasts of a 50% penetration rate by 1995, competition is heating up in the nascent 4-wheel, antilock brake system market that experienced a 367% increase in the past year. Usage on domestic-make cars rose to 3.6% in model year ’87 from under 1% in ’86.

So far, ABS appears only on a few GM, Ford and Lincoln cars, aside from several models on which it is standard. Chrysler has yet to offer ABS on current models, although its Imperial was the first domestic car to have 4-wheel ABS when a Bendix-supplied system became optional on the ’71 Imperial. Due to very low demand, it was dropped after the ’73 model year. Still, WAR forecasts that dominant supplier Robert Bosch is in for competition from three, possibly four, rivals including Alfred Teves, already supplying certain GM and Ford models, GM’s Delco Moraine Div, starting in model year ’89, and Allied-Signal’s Bendix Brake Div., beginning in ’90.

Tight-lipped about its future plans, Kelsey-Hayes, already making rear-only ABS for ’88-model Ford and GM light-duty pickups, is expected to enter the 4-wheel ABS market within a few years. K-H pioneered rear-wheel ABS in the late 1960s when it supplied the Sure-Track Braking System offered as an option on ’69-model Ford Thunderbird and Lincoln Mark III. Although it became standard on the ’70 Mark III, Sure-Track also was discontinued after a few years due low demand.

This month at the Detroit Auto Show, Buick announces a $25,000 price tag for its all-new 2-passenger Reatta sport coupe built at the Lansing, MI, Reatta Craft Centre. Only two options, a power sunroof and 16-way power driver seat, are offered. No word yet on plans for the prototype convertible displayed at the show.

Tuesday, Jan. 19, brings word that GM will close “indefinitely” its Leeds, MO, J-car plant in mid-April and will drop the Olds Firenza and Cadillac Cimarron at the end of the ’88 model year. Buick Skyhawk, built at Leeds along with the Firenza and Chevy Cavalier, will move to the Janesville, WI, plant alongside Cavalier, after Cimarron output ends in late May. The Lordstown, OH, plant will continue building the Cavalier and Pontiac Sunbird.