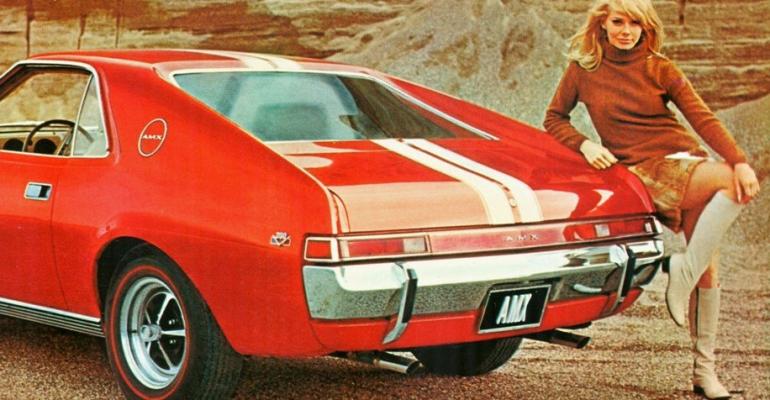 Shortages of natural gas for industrial use again forces auto plants to curtail operations, either because of a lack of fuel or parts shortages due to idled supplier facilities. For example, in one week General Motors lost 10,939 vehicles, while Chrysler output was cut short by 6,739. Having lost several days’ output due to a lack of radiators Kaiser-Frazer located a supply of propane and assisted its New York-based supplier to convert its operations to that fuel in order to ensure more continuous shipments.

The much-ballyhooed Playboy small car is finally unveiled in Detroit to dealers and auto writers. Priced at $985, excluding destination charges and taxes, the car is being assembled at a former aircraft-engine plant in Buffalo, NY. The variant shown at the unveiling accommodates three passengers abreast on a single bench seat. According to Ward’s Automotive Reports, “an outstanding feature is a steel top that locks in place when raised and retracts into a compartment behind the seat when lowered. The top is counterweighted and operates with insignificant effort.” Built on a 90-in. (2,286-mm) wheelbase unit-body with a 47-in. (1,194-mm) tread width, the Playboy is powered by a 40-hp L-head 4-cyl. engine supplied by Continental and Hercules. Curb weight is 2,035 lbs. (923 kg).

Warner Gear supplies the transmission, Spicer the rear axle, Auto-Lite the starter, generator and ignition system and Ross the steering assembly. With a top speed of 65 mph (105 km/h), the Playboy is claimed to get 30 mpg (2.1L/100 km) in “ordinary driving.” WAR says,”

Ford plans to import 6,000 cars from its U.K. subsidiary over the next six months. Built at the Dagenham, England, plant, the cars are smaller than American models and of pre-war design. The deal is worth $4.5 million to the automaker’s British arm. It is seen as a move to test the market for smaller, lighter cars as well as response to the British government’s call for increasing exports. Ford and Chevrolet have abandoned plans to build smaller, lighter cars in the U.S. after an analysis indicated the potential market would be limited due to the fact manufacturing costs would push retail prices too close to those of the least-costly standard variants.

While GM divisions are finding strong demand for Hydra-Matic and Buick-built Dynaflow automatic transmissions, nearly all other manufacturers are pursuing development of an automatic gearbox of their own. According to WAR, Oldsmobile, which has offered the Hydra-Matic since model year ’40, is installing it in 90% of its “98” models. A new user, Pontiac reports demand at 50%. The overall take rate at GM would be higher if Hydra-Matic had the capacity to build to demand. Meanwhile, Dynaflow is a “fascinating design,” WAR says, adding “Its smooth flow of power in the transition from a standing start to wide-open-throttle performance is an industry dream come true.”

Testifying at a Feb. 7 hearing by the Senate Subcommittee on Antitrust and Monopoly, George Romney, president and chairman of American Motors, calls for splitting GM and Ford into two or three parts. At the same time, he urges UAW bargaining power be dispersed by “prohibiting the combination of national unions for the establishment of common bargaining demands or use of economic power.” The auto executive further testifies the maximum percentage of total sales for any industry obtained by one company should be fixed by law. He recommends the limitation be set at about 35% for a company not engaged in more than one basic industry and 25% for those that are. The ultimate aim, he says, “is to prevent combinations of employers or unions from destroying the competitive system.”

Officials of Ford’s International Div. are warning of vanishing exports to Europe by 1970 as a result of the implementation of the Common Market in which tariffs and quotas between member countries will gradually be eliminated and tariffs with non-member countries will be unified, limiting the ability to export parts or finished vehicles to Europe. However, Ford says U.S. automakers with established European production operations are best positioned for the future and forecasts more growth for those facilities. In 1957, U.S. automakers exported some 300,000 cars from the U.S. to markets worldwide.

Slowing sales will push the number of domestic-make new cars in dealer inventory to 900,000 units by Feb. 28, according to a WAR analysis. That would equal an unprecedented 69 days’ supply, the highest ever recorded in automotive history. New-car sales in the first two months of the year are now forecast by Ward’s at 692,000 units, 27.8% less than the 959,000 sold in like-1957. The slump portends severe adjustments in production, it is opined, with GM reportedly cutting most, if not all, of its plants to a 4-day workweek. With a similar move restricted by UAW contract language, Ford is preparing to embark on week-long shutdowns instead. Although there is no word yet on Chrysler’s plans, it too is expected to make production cuts to deal with mounting inventory.

Ford will permanently shutter its Somerville, MA, assembly plant on March 14. That follows the Feb. 13 closing of its Buffalo, NY, plant. The automaker says the Somerville plant, which employs 1,000 workers, is badly located from the standpoint of its East Coast distribution pattern. In addition, the facility’s restricted size does not provide space for needed flexibility, according to Ford. Somerville and Buffalo workers are being given the option of transferring to the nearly complete assembly facility being built in Lorain, OH. The two closings leave Ford with five Eastern assembly plants, including a Mercury facility in Metuchen, NJ, and Ford plants in Atlanta, GA; Chester, PA; Norfolk, VA and Mahwah, NJ.

Calling it an audio “explosion,” Motorola says its worldwide automotive sound equipment sales this year will top 13 million units, worth $980 million, 75% of which will sold in the U.S. The total includes sales to the aftermarket of an estimated 2,750,000 4- and 8-track tape players and 2.3 million radios. OEM radio and tape player sales are forecast at 8.0 million units. Industry wide auto sound system sales, according to Motorola, have passed $1.0 billion and now exceed the growth rate of color televisions. The popularity of cartridge tape players also has spawned a new market for portable and home players that the company says forecasts at 1.0-1.5 million in 1968, worth some $80 million.

A new “free-breathing” 315-hp 390-cid (6.4L) V-8 will be offered as an option in American Motors’ forthcoming 2-seat AMX. The engine will be capable of accelerating the car from a standing start to 60 mph (97 km/h) in 6.5 seconds when fitted to a 3-speed automatic transmission. A prototype AMX turned in a quarter-mile run in 14.74 seconds and 95 mph (153 km/h). In addition to the AMX, which goes on sale in March, the engine will be available in the sporty Javelin SST variant and later in the midsize Rebel SST and luxury-oriented Ambassador SST.

Booming import car sales may prompt a backlash in the form of increased duties, WAR reports.  January 1968 import sales hit an any-month high of 67,093 units, up 51.9% from the 44,154 delivered in the same month a year earlier, with leader Volkswagen also hitting an all-time high of 40,885 compared with 26,671 in like-1967. A portion of January’s blockbuster performance may have been due to fears of a substantial hike in import duties later in the year. Numerous proposals aimed at stemming the outflow of U.S. dollars are circulating in Congress, with import cars a likely target despite concerns over sparking a trade war. Proposals calling for a 30% tax on the amount of money U.S. citizens spend abroad, including the price of cars bought through U.S. dealers but delivered in Europe, would wipe out that segment of the market overnight, according to WAR. Such a move would deal a particularly serious blow to VW, Mercedes-Benz and Volvo.

Lincoln-Mercury has unveiled to the press its new Continental Mark III 2-door luxury-specialty hardtop. The new model picks up where the Continental Mark II hardtop coupe left off when it was canceled at the end of the ’57 model year, and ignores the fact the Continental Mark III name was used on a dressed-up variant of the standard ’58 Lincoln. Built on a 117.2-in. (2,977-mm) wheelbase with an overall length of 216.1 ins. (5,489 mm), the new Mark III features concealed headlamps and a vertical grille “that resembles something between those of a Mercedes-Benz and a Rolls Royce.” The trunk lid features a raised center section simulating a spare tire in a fashion similar to that used on the Mark II. However, it will not be used to cover a vertically mounted spare tire as it was on the earlier model.

The supply of the hot-selling Ford Explorers will increase for the ’95 model year. Ford says it plans to invest almost $400 million to convert its St. Louis, MO, plant to Explorer production after output of the rear-drive Aerostar small van ends at the conclusion of the ’94 model run. Explorer output is scheduled to commence in January 1995. The SUV will account for about 230,000 units annually in addition to some 70,000 Ranger pickups also built there.

A day after filing, GM says it has reached a settlement to end its lawsuit against NBC after the broadcaster agrees to retract a Dateline NBC presentation showing a GM pickup with controversial the side-saddle fuel tank, built in model years ’73-’87, bursting into flame during a side-impact crash. Following a GM investigation of the episode, NBC admits the contractor who staged the crash put incendiary devices on the fuel tank to ensure a fire after two prior attempts failed to produce any flames. GM also says the car in the film footage was traveling at a much higher speed than reported when it hit the truck and a faulty gas cap that allowed fuel to spill from the filler neck was used to produce the desired effect. In addition to the retraction, NBC will GM pay nearly $2 million to cover the cost of its investigation.

Magna International and Manfred Gingl, a former Magna CEO, plan to launch a new joint venture to build engine and transmission components, and eventually niche powertrains. Called Torrero International, the JV could launch as soon as March, if Magna shareholders approve.  The new venture will incorporate Magna’s existing Tesma International operations. Plans call for growing Torrero to a $790 million business by 2000 compared with the estimated $150 million earned by Tesma in 1992. Gingl says in the future he would like Torrero to supply complete specialty powertrains similar to the way in which Mercury Marine now supplies the high-performance engine for the Corvette ZR-1.