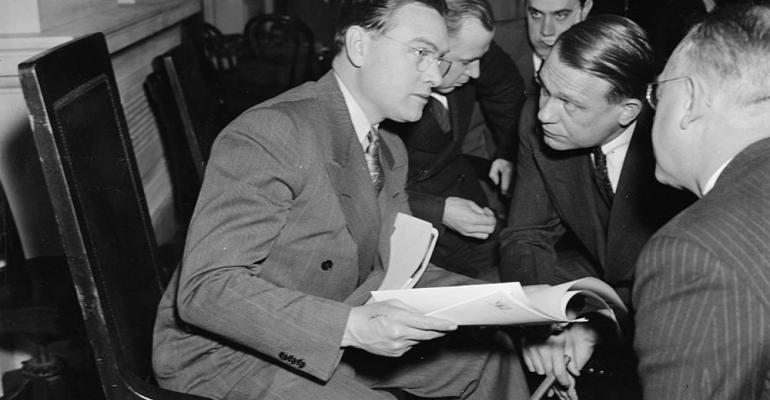 The long-simmering internal split within the UAW is reaching “crisis” stage, according to Ward’s Automotive Reports’ Feb. 25, 1939, issue.

Rising tensions between forces loyal to President Homer Martin and anti-Martin forces backed by the CIO, most recently manifested itself in a Feb. 22 walkout at the Plymouth assembly plant by the CIO-backed faction, resulting in a shutdown for several days and some parking-lot fights.

WAR expresses concern similar disruptions will take place in plants where the two factions are present until the courts and National Labor Relations Board establish who is in control of the union.

In the meantime the Martin faction plans a Detroit leadership convention beginning Mar. 4, while the CIO group has set Mar. 27 for the opening of its convention in Cleveland. 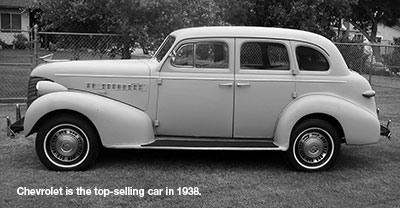 Auto makers in the U.S. exported more that $229.4 million worth of passenger cars, commercial cars (light trucks) and components to 25 countries in 1938.

According to WAR’s Feb. 18 issue, Hupp Motor Car is expected to resume operation in the near future, now that it has received a $900,000 loan from the federal government’s Reconstruction Finance Corp. 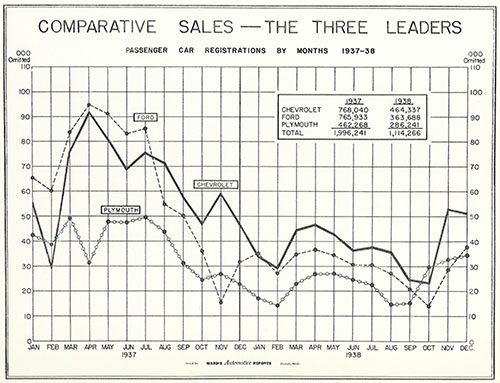 Hupp reported a net loss of $1.7 million in the first 11 months of 1938, down slightly from a loss of just over $1.8 million in 1937. Although it built some of its new ’39 Skylarks in recent weeks, they all were hand assembled.

“The seriousness of the overall fuel supply situation may be seen in the government’s request for funds and authority to construct a $125 million, 1,200-mile (1,931-km) pipeline from the Arabian old fields to an easy-access Mediterranean port.”

U.S. officials also are eying Mexican and South American crude supplies as precautionary measures. Gasoline derived from shale oil also is possible, but would cost $0.12 per gallon to make vs. $0.05 for that derived from conventional U.S. crude.

“A 10% blend of alcohol in gasoline is another possible motor fuel, but would cost an estimated $0.10 per gallon to produce.”

Noting that in the opinion of many attendees at a recent Society of Automotive Engineers meeting, postwar car weight will need to be cut to a minimum, WAR says, “Evidently the car of the future will be designed with gasoline consumption economy as a primary objective.” 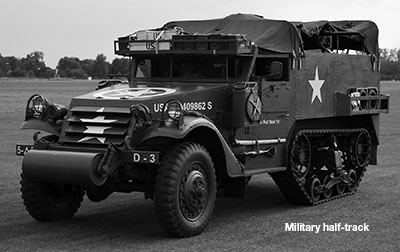 Having already cut planned 1944 production of military half-tracks and Jeep vehicles the War Production Board is expected further reduce output of war materiel this year.

According to WAR, manufacturers will be allowed to make up the lost volume by increasing output of civilian-use trucks, allocated at 81,000 units, by up to 100,000 units in 1944.

However, “some observers believe that no decrease of consequence in presently established military vehicle projections will be made until after the course of the proposed European invasion is clearly defined.”

Additional civilian-use trucks reportedly are urgently needed both in manufacturing and the agricultural sector. Medium-duty trucks with a 3,000-lb. (1,361 kg) load capacity are the most likely be allocated additional production.

Chevrolet, Ford, Dodge and International Harvester are expected to be at the forefront of any increase due to their integrated manufacturing capabilities. 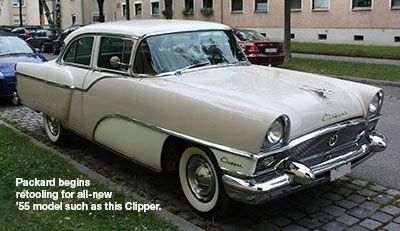 “The new and capable Packard management has reasserted its determination to reclaim the company’s former rank as a leading producer of fine passenger cars in the medium- and high-price fields,” a WAR story notes. “Prewar, Packard was considered second to none. Now steps are being taken to regain this enviable prestige.”

Towards that end, new engine-machining lines are being installed in the company’s single-story plant in Utica, MI, although about one-third of the facility’s 1.5 million sq.-ft. area will be retained for test cells to evaluate  jet engines being built at Packard’s 4-story plant in Detroit.

However, “speculation that Packard would take on its own body building (following the 1953 sale of body supplier Briggs to Chrysler) seems premature.”

In the buyout, Chrysler assumed an obligation to retool and supply bodies to Packard through ’56, it is noted.

Ford introduces its Thunderbird, “a new kind of personal car” Jan. 20 at the Detroit Auto Show. “Although its low silhouette makes for a sports car appearance, the single-seater (two persons) is a fullsize vehicle with an all-steel body and most of the major parts are interchangeable with Ford’s regular line.”

Among the car’s innovations is a removable composite hardtop that can be installed after the convertible top is folded out of sight behind the seat. The car also will offer the industry’s first adjustable steering column which telescopes in and out. Thunderbird options include power steering, power brakes and a 4-way power seat. 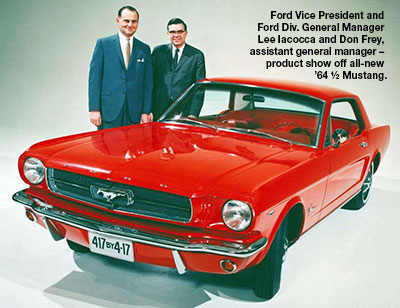 Ford closed its Dearborn assembly plant Friday, Feb. 7, 1964, to retool part of the facility to build the new Mustang sporty car, slated to debut in the spring. The plant will not reopen until early March.

The midsize Fairlane will continue to be built alongside the Mustang, but at a reduced volume. Plants in San Jose, CA, and Kansas City, MO, will make up Fairlane volume taken out of Dearborn.

Expecting “big things” from its upcoming Barracuda sporty car, Plymouth plans to source the model in three U.S. plants: Detroit, Los Angeles and St. Louis. Windsor, ON, will build the car for the Canadian market.

Based largely on the compact Valiant, the Barracuda will be available only in a fastback body style featuring a large wrap-around rear window.

Below the beltline, styling will be similar to that of the Valiant, except for a unique grille. The interior features a fold-down rear seat and a panel between the interior and the trunk can be opened, allowing long objects to be carried within the car. 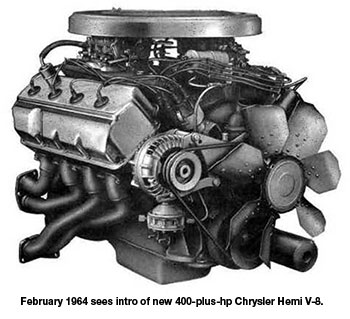 Chrysler is taking the wraps off of two all-new high-performance 400-plus-hp V-8 engines, featuring hemispherical combustion chambers. The 426-cid (7.0L) engines are to be marketed by Plymouth under the name Super Commando, while Dodge will brand them Hemi-Charger.

While the V-8s will be available to the “general public, they have been principally designed for competitive events.” One version is designated for drag racing, while the other has been developed for oval-track use. (Eventually, a so-called “Street Hemi” will be added to the mix after the racing variants prove to be unsuitable for general driving conditions.)

Yugoslavian auto maker Zastava has reached an interim agreement that is expected to result in it taking a major stake in financially troubled Yugo America, marketer of Yugo cars.

Under terms of the agreement, Yugo America and its parent, Global Motors, are filing Chapter 11 bankruptcy petitions. 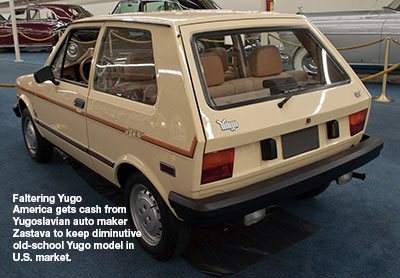 Once Zastava takes control of U.S. operations it is expected to introduce a new, modern, 4-door hatchback powered by a 1.4 L 4-cyl. engine. A version of the car was unveiled for the first time at the RAI Motor Show in Amsterdam on Feb.1.

Hyundai and Chrysler have reached an agreement for the South Korean auto maker to supply Chrysler with up to 30,000 sedans annually from its new Bromont, QE, plant.

The car will be based on Hyundai’s recently redesigned Sonata with output slated to commence in Spring 1991. It will be marketed as a replacement for the imported Eagle Medallion after production ends later this year of the Renault car on which Medallion is based. 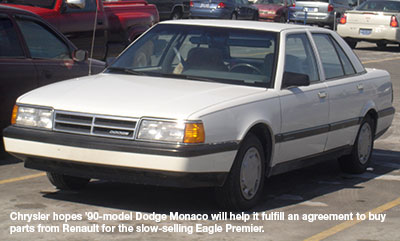 Chrysler plans to introduce a Dodge version of the Eagle Premier midsize car it inherited as part of its 1987 takeover of American Motors.

The car, reviving the Monaco nameplate, is due to debut as a ’90 model as part of an on-going effort to fulfill a contract calling for the purchase of a specified number of engines and transmissions, among other components, from Renault.

The agreement was part of the slow-selling Premier’s development when Renault controlled AMC. The contract mandates hefty penalties if the volume purchases are not met.