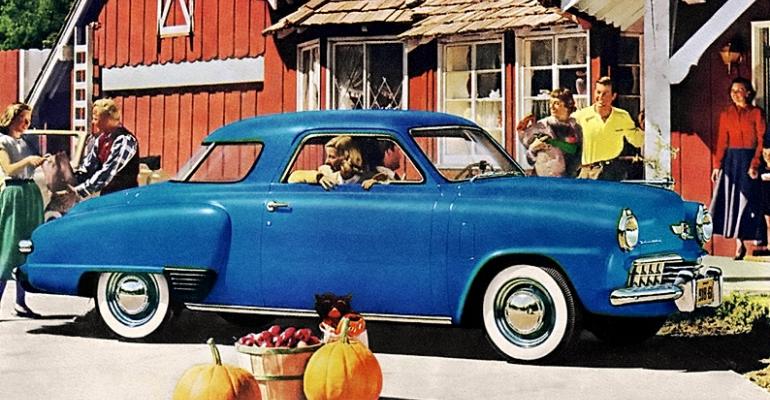 In the Dec. 23 issue of Ward’s Automotive Reports, the editors suggest subscribers give a subscription to 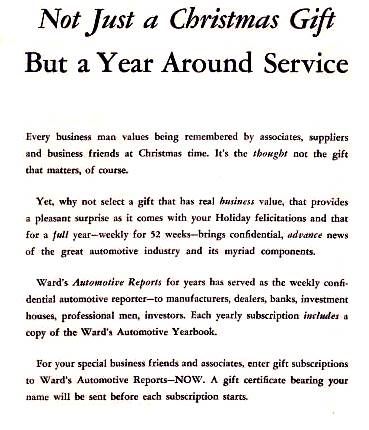 the publication as a Christmas gift to their “special business friends.” A gift certificate bearing the name of the giver will be sent prior to the start of the subscription. Each of 52 weekly issues “will bring confidential, advanced news of the great automotive industry and its myriad components,” it is pointed out.

Hudson now has begun production of 6-cyl. variants of its all-new ’48 cars. These models are powered by a redesigned 262 cid (4.3L) I-6 that produces 121 hp. It features a 6.5:1 compression ratio and a cast iron block with aluminum cylinder head. It has four main bearings and is pressure-lubricated at 41 points. Hudson prices range from $1,762 for the 6-cyl. 3-passenger coupe to $2,100 for the I-8 Commodore custom 4-door sedan.

​Willys has launched its new station sedan, a more luxuriously appointed variant of the Jeep station wagon. Unlike the 65-hp 4-cyl. powering the wagon, the station sedan is propelled by a 70-hp I-6. Output began with a first-week total of 10 units. Fifty are slated for December assembly, increasing to 400 in January, 1,600 in February and 3,555 in March. Meanwhile, the new sporty Jeepster convertible is scheduled for a June 1948 launch with the 65-hp 4-cyl. engine. The I-6 reportedly will be made available later in the model run.

Studebaker has made a $7.43 million cash offer for Empire Steel of Mansfield, OH. If accepted, the automaker will use working capital to close the deal, according to Ward’s. Empire’s plants will provide Studebaker with enough steel in 1948 to enable it to reach its output goal of 25,000 vehicles monthly.

Dec. 21 shows Ford in the top spot with 1,490,234 car assemblies compared with Chevy’s 1,487,927. However, estimated Chevy car output for the final week of year edged that of its Dearborn-based competitor giving Chevy the top spot if final figures come at or above estimates.

Ford has unveiled its all-new unit-body 4-passenger ’58 Thunderbird. The wraps were taken off at a press preview held at the Wixom, MI, assembly plant where it is built alongside the Lincoln and Continental. Following a ride-and-drive at Ford’s Dearborn test track WAR says, “The drive didn’t disclose even the slightest squeak or rattle. Additionally, the car demonstrated an uncanny ability to speedily negotiate curves of unusually short radius. Sports car performance-minded fans will appreciate the high ratio of horsepower to gross weight found in this car.”  At 205.4 ins. (5,217 mm) the new model is 24 ins. (610 mm) longer that the 2-passenger ’57 Thunderbird and features 150% of the former model’s trunk space. Ford says it spent $30 million in development and tooling on the ’58 model. 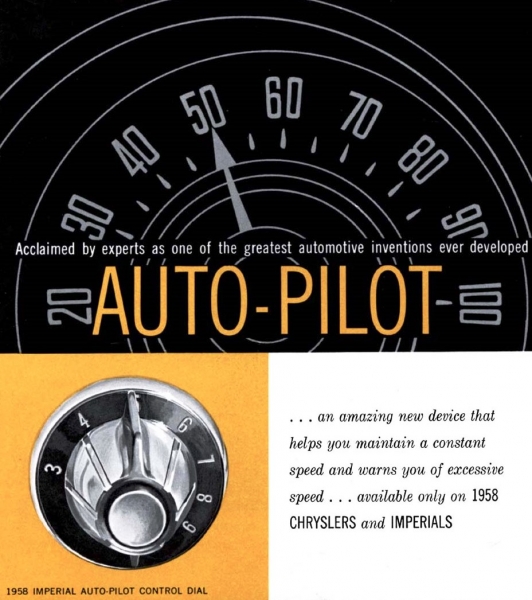 WAR editors, after trying the device in a combination of highway and expressway driving, call Chrysler’s new Auto-Pilot speed control device “sensational,” saying it “vies with anything that has ever evolved through the long years of automotive history.” The device may be set for any speed above 30 mph (48 km/h) by adjusting a dial located on the driver’s side of the instrument panel. Once set, the car will maintain the desired speed. Expected benefits include better fuel economy, reduced sparkplug fouling, less carbon buildup and some protection against speed traps. It will be offered on the ’58 Chrysler Windsor, Saratoga and New Yorker at $86.10 and on the Imperial at $88.70.

The Bureau of Labor Statistics pegs the cost of the industry’s ’68-model price increases at an average of $87.54 at the wholesale level, an increase of 3.8% over the ’67 models. Of that, safety improvements accounted for $29.65, or 33.9%, and smog control $11.20, or 12.8%. Another $0.70 is attributed to other changes including making former options standard. The BLS said the remaining $47.39 represented the “quality-adjusted” price increase. At the retail level the average hike is $116, of which $56 is for safety and smog-reduction changes.

American Motors and Gulton Industries are teaming up to develop an electric car with greater range and a higher cruising speed than prior EVs. AMC has designed a 3-passenger coupe called Amitron that is slated to be powered by a Gulton battery pack consisting of lithium-nickel-fluoride and bipolar nickel-cadmium batteries combined with a solid-state controller. The car is said to have a driving range of 150 miles (241 km) compared with 40-80 miles (64-129 km) for other recent research EVs. It has a top cruising speed of 50 mph (81 km/h). Gulton says the battery pack consists of two lithium-nickel-fluoride batteries that, at cruising speed, can be used to recharge the two bi-polar nickel-cadmium batteries that provide energy for rapid acceleration. The fluoride batteries then can be partially recharged from the car’s regenerative braking system. The four batteries provide the power of 45 lead-acid batteries the maker says. They can be fully recharged in four hours, half the time required form conventional batteries, using normal household current. A 20-mile (32-km) range can be charged in 30 minutes (10 minutes with a special high-voltage connection). The pack has the ability to be recharged 1,000 times in three years.

General Motors and Toyota are discussing plans for Toyota to sell up to 50,000 of GM’s redesigned J-cars (Chevy Cavalier, Pontiac Sunbird) annually in Japan. Although GM and Toyota decline comment on the talks, WAR says sources indicate the cars will be right-hand drive and possibly badged as Toyota models, with sales expected to start in 1995. The Toyota J-car is slated for assembly at GM’s Lansing, MI, plant. The publication says the deal would have advantages for both companies: Toyota would experience less trade pressure in the U.S. without having a significant impact on home-market sales of its own models; GM would gain and image boost resulting in increased sales in the Asia/Pacific region. Currently GM sells a limited number of higher line cars, 7,541 through October, in Japan via independent distributor Yanese.

Chevrolet expects to double sales of its sporty Camaro after the redesigned ’93 model goes on sales in January. After retailing about 40,000 in the abbreviated ’93 model run, Chevy forecasts full-year Camaro volume at 115,000 to 120,000 units. Camaro, along with the Pontiac Firebird, is built at the Ste. Therese, QE, Canada, plant that has the capacity to assemble 200,000 units annually. The base Camaro is powered by a 3.4L V-6 coupled with a 5-speed manual transmission. The top-end Z28 edition features a Corvette-derived 5.7L V-8 mated to a standard 6-speed manual gearbox.

Ford’s Lincoln-Mercury Div. wants to sell convertibles in a “big way” says General Manager Lee Miskowski​ forecasting 1993 sales of 12,000-15,000 for the Australian-built Mercury Capri. The $13,000 small car will remain in production at Ford of Australia at least through 1995, but there are no current plans for a replacement. Miskowski is mum on what additional convertibles are in the works as well as a Capri successor. However, it is rumored that a possible successor may be an Escort-derived car that would be built by Ford de Mexico.

Alfa Romeo is struggling to maintain its toehold in the U.S. market after the partnership with parent Fiat and Chrysler was dissolved. A spokesman for Alfa Romeo Distributors of North America says the firm is on track to sell 3,000 cars in 1992 compared with 3,500 in 1991. An Alfa spokesman says that dealers also are experiencing a decline in service business “because our cars don’t break anymore.”  ARDONA was established in 1989 as a partnership between Fiat and Chrysler with the goal of selling 30,000 cars annually in the U.S. by 1992. However, Chrysler pulled out of the venture in 1991 and Fiat has cut its near-term sales forecast to 3,000-5,000 cars annually. Alfa’s current U.S. lineup includes the base 164 sedan at $30,240 and the $34,900 164S as well as the $21,764 Spider sports car.