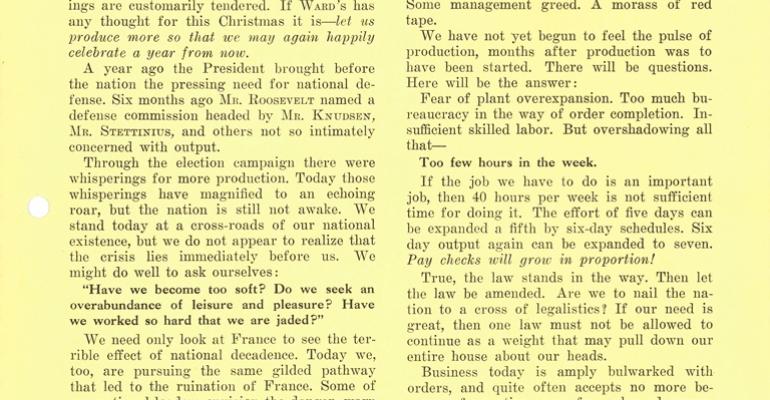 Instead of the publication’s usual brief holiday greeting, readers of Ward’s Automotive Reports’ Dec. 21, 1940 issue are presented with a full page-one editorial entitled A Christmas Message. The editorial takes to task workers for seeking to end their work week at 40 hours as well as “greedy” management that refuses to expand plants in a timely manner to meet the growing need for defense equipment in the face of the war raging in Europe. Saying the country “stands at a cross-roads of our national existence, but we do not appear to realize the crisis immediately before us. We might do well to ask ourselves: Have we become too soft? Do we seek an overabundance of leisure and pleasure? Have we worked so hard that we are jaded?”  Commenting on the “zealousness” of the country founders, the editorial notes, “An overabundance of pleasure, a whistle at the end of 40 hours each week, did not comprise that zealousness. Hard work did. Are we to drain the fruits of the labors of the pioneers, or are we to go on increasing them?”

On Monday, Dec. 9, a Plymouth rolls off the line, marking Chrysler’s 1.0 millionth car assembly of 1940. Although the automaker built more than 1.0 million cars in 1936 and 1937, output totaled only 778,781 units in 1939. At the same time, factory shipments of Chrysler-brand cars reached a record for the month of November with another peak, possibly an any-month record, seen for December.  Meanwhile, a new labor agreement gives workers at the No.3 automaker their first bonus since 1937, in addition to higher wages and other improvements.

Effective the week of Dec., 1, 1940, Canada embargoes the import of U.S. cars for sale in that country and establishes a licensing system for importing trucks. Through September, Canada was the largest export market for U.S. cars, importing 11,452 of them worth $7.7 million. It was the sixth-largest market for trucks with 1,490 units, valued at $2.7 million.  In addition, Canada was the largest export market for U.S. auto parts. Now, vehicle imports are expected to be restricted almost entirely to military trucks and car-parts shipments are seen falling sharply due to reduced local assembly volumes resulting from a sharp tax increase on car purchases.

At Ford, “a sudden change of decision sent purchasing agents hastening this week to obtain requirements for the start of production, next week, on the long-awaited and much-rumored 6-cyl. car," says Ward’s in its Dec. 21, 1940, issue.  Output is to commence at 100 units on Monday, Dec. 23, with 500 cars to be completed in the four available work days. Commencing the week of Dec. 30, production will hit 800-900 units with 2,000 scheduled weekly after that until dealers have been supplied with 25,000 cars. Thereafter, output will depend on demand.

GM has become the only automaker offering its dealers a 5-year contract in place of the previous 12-month pact. It is seen as an interim step between the 1-year deal currently offered by Hudson, Packard and Nash and the permanent franchise agreement offered by Ford and Chrysler. Meanwhile, some states are moving to protect dealers further. Most notable among them is Colorado which requires state or federal court approval to cancel a dealer’s franchise, a move being contested by a “major” auto manufacturer. Elsewhere, Wisconsin has passed legislation to prohibit an “unjustified” increase in dealers, while North Carolina is expected to follow Arkansas, Minnesota and Tennessee with a law to prohibit “coercive” acts by automakers.

The Big Three soon will change to unibody car construction, opines WAR, with cost-savings upwards of $15 per car. The only “real” modification in the production process will be to “produce cars with body and frame being of a single unit, all a solid welded-together mass of steel instead of mounting the body on a chassis secured by relatively insecure bolts.”  Ford is expected to be the first to make such a move, starting with its lower volume Thunderbird and Lincoln in ’58. Chrysler is seen moving swiftly in the same direction. GM, the newsletter says, would thus be forced to adopt unitized construction “post haste.” It also is noted that Chrysler, with just two U.S. plants – Detroit and Los Angeles – building Dodge, De Soto and Chrysler cars, could become the first of the Big Three to adopt unitized construction across the board.

Ford-brand dealers sold more new cars per franchise in the first 11 months of 1955 than any other make. The 6,807 dealers handling Ford models delivered an average 222 cars in January-November, compared with the 211 delivered by each of archrival Chevrolet’s 7,500 retailers. Buick ranked third with its 3,575 franchisees delivering 192 cars, followed by Oldsmobile’s144 deliveries by each of 3,900 dealers. Mercury was in fifth position with 2,600 dealers selling an average 142 units each. Although Plymouth, at 9,652, had more franchises than any other brand, sales averaged of just 65 units each.

The proposed consolidation of all Henry J. Kaiser business interests into a single unit prompted a near doubling of the value of Kaiser Motors stock in the week ended Dec. 26. Although Kaiser Motors is expected to turn a profit this year, reversing a net loss of $35.5 million in 1954, that would be only the third positive earnings report since its founding in 1945, the others being 1946 and 1947. Through its Willys Motors subsidiary, KM has built only Jeeps and commercial vehicles in the U.S. this year. Under the proposed merger, all Kaiser interests, including engines, steel, aluminum, chemicals, cement, construction and automotive combine under the name Kaiser Industries. The $70 million in long-term debt of Kaiser Motors would be eliminated through a $90 million bank loan to Kaiser Industries.

Datsun is now among the top 10 imports in sales in 1965, reaching seventh place, at 10,569 units, through October. The Japanese import accounted for 2.3% of the 465,039 import cars sold in the 10-month period. Its 10-month tally was more than double the 5,037 sold in like-1964, when import sales totaled 404,924 units. Previously sold as the Bluebird, the car has been renamed Datsun 1200 for model year ’66 and now is powered by a 67-hp. 4-cyl. engine mated to a 4-speed full-synchromesh manual transmission. Datsun is one of two major Japanese makes currently marketed in the U.S., WAR says, the other being Toyota, “that sells in a much smaller volume” and is not counted among the market leaders.

A modern reincarnation of the classic Duesenberg is expected to be introduced in January or February 1966 in Indianapolis, IN, birthplace of the original car.  The new 4-door sedan features a body design by Virgil Exner and is built in Italy by Karmann Ghia. Duesenberg Corp. Chairman Fred Duesenberg and President Fritz Duesenberg tell Ward’s they have raised their sales expectations from 200-300 units yearly to 500, the capacity of the Ghia plant. The car, designed with cues from the 1930s original, is based on a Chrysler Imperial chassis and is powered by Chrysler’s 425-hp, 440 cid (7.2L) OHV V-8. It rides on a 137.5-in. (3,493-mm) wheelbase with an overall length of 244.7 ins. (6,215 mm). Fuel is supplied from twin rubber-bladder fuel cells, one in each rear fender, specially developed for the car by Firestone. Standard equipment includes air conditioning, a tilt/telescopic steering column, 6-position power driver seat, power steering and power windows. The car is expected to sell for a base price of $19,500.

With U.S. new Light-vehicle sales lagging prior year by 4.9%, or nearly 658,000 units, through November, and manufacturers lamenting, “dealers have all but stopped ordering cars,” U.S. production schedules are being cut substantially and year-end downtime is being extended for many assembly plants. Automakers, in their latest production plans, have whacked 212,000 cars and trucks from the first-quarter 1991 slate, on top of the 93,000 vehicles deleted from assembly plans early in December, due largely to the temporary shutdown of some 30 plants for varying periods. As a result the Big Three are expected to post combined losses of $500 million-$800 million in the fourth quarter. Analysts estimate GM will post a fourth-quarter loss of $350 million, on top of the $2.1 billion in red ink it saw in Q3. Ford now is seen losing $330 million in Q4 and Chrysler between $34 million and $56 million.

GM says it plans to allow other automakers to license ETAK’s dead-reckoning and map-matching technology for which it has held exclusive North American rights since 1985. ETAK’s technology is being used to develop a mapping system that will allow drivers to find their way using electronic maps mounted in the instrument panel. The GM move is seen as a way to spread the development risk. The first such system in expected to be offered in the ’94 Olds Toronado. Outside the auto industry ETAK licensees include Clarion in Asia and Robert Bosch in Europe.

Sales of luxury cars have been a bright spot amid the market gloom this year. Deliveries of cars with a base price above $20,000 are up 1.6% through November, to 1,060,607 units. Luxury cars were the only one of the Ward’s market segments to show a year-over gain in the first 11 months of 1990. Sales are expected surge in December for cars priced above $30,000 as buyers rush to avoid the impending excise tax of cars in that price range that takes effect in 1991. However, it is noted that the luxury-car gain is due mostly to the new Infiniti and Lexus brands introduced in late 1989. Still, Cadillac remains the top-selling luxury nameplate with 22.4% of segment sales, despite a 4.5% unit decline. Rival Lincoln holds a 20% luxury segment share, even though its sales are off 11.5%.

At the unveiling of its redesigned Crown Victoria large car Ford says it seeks to attract “step-up” buyers shopping for their first fullsize car. The car goes on sales in March 21, 1991, as a ’92 model with a new 4.6L V-8 that deliveries more power and better fuel economy than the 5.0L engine it replaces. Crown Vic and its Mercury Marquis companion start production Jan. 14 at Ford of Canada’s St. Thomas, ON, plant that has an annual capacity of 220,000 units. Ford expects Crown Victoria sales to reach 100,000 units in 1991, rising to 120,000 annual after that.

Calling them a “relic of the 1940s War Control Board era," Chrysler says it will stop 10-day sales reports beginning in January 1991. Reportedly upset that foreign automakers officially report only their domestic-make cars on a 10-day basis, Chrysler says only that ending the 10-day reports will save money and make comparisons with import makes, that report only monthly, more accurate. Although the No.3 automaker is urging GM and Ford to follow suit, Ford says it has no plans to do so while GM has yet to respond. At one time American Motors, prior to its 1987 takeover by Chrysler, also eliminated 10-day reports for a period, but resumed them when media outlets began reporting estimates that the company regarded as too low.