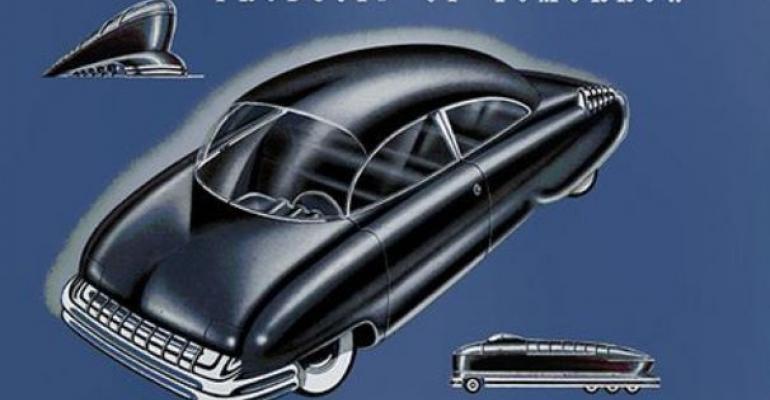 Ward's Automotive Reports asks, "Where is Car of Tomorrow?"
Industry>Flashback

Ward’s Automotive Reports tells readers that engineers at “one of the Big Three automakers” have apparently solved a problem plaguing automotive consumers for more than a decade: doors that open without notice. Following the introduction of “easy close” door latches in the late 1930s, doors have been known to pop open when the car body under goes torsional stress, such as when rounding curves or traversing bumpy roads, forcing  passengers to live with the threat of being ejected at high speed. The problem is partially the result of production variations in which the door and body latch components sometimes interface with as little as 1/8 in. (3 mm)of overlap. “An example of the problem was seen at a recent new-car introduction. When automaker executives drove a parade of new cars over a bumpy gravel road, doors repeatedly popped open.” But with the new design, the latch only can be opened by deliberate movement of the interior or exterior door handle, allowing “passengers to make use of the heretofore dangerous arm rest with perfect safety.” The story notes that prior to the “easy close” latches, the force needed to securely close doors sometimes resulted in broken window glass.

Automakers say they expected little immediate impact from reinstatement of Regulation “W” controls on installment buying. Enacted by the Federal Reserve Board in 1941, but cancelled after the war, it requires buyers to post a 33% down payment and limits the repayment period to 12 months. However, automakers say 95% of their large order backlogs are on a cash basis anyway so the changes will have minimal impact except for low-capital buyers who may be priced out of the new-car market. One of the first groups to be stung by the new requirement will be auto workers, WAR notes.

New-car buyers are increasingly wondering what happened to the long-promised “Car of Tomorrow,” Ward’s editors opine. Buyers are searching in vain for the improvements in car performance and decreased operating costs promised them through the myriad engineering advancements achieved as a result of war work, the news letter says. “Women, whose influence on car buying is not to be underestimated, have seen their kitchens graced with new and greatly improved ranges, refrigerators and dishwashers, and their homes have been furnished new radios and televisions. But where are the new cars?” Cadillac, Hudson, Oldsmobile, Packard, Studebaker and others have unveiled the “new-look” in car styling, but there have been few changes in powertrains and chassis details, according to WAR.

An unexpected heatwave forced several Detroit-area auto plants to close for three consecutive afternoons during the week ended Aug. 28. That, plus parts shortages related to ongoing supplier strikes, cost the industry more than 10,600 car and truck assemblies for the week.

After a year’s absence, General Motors is reviving its Motorama exhibition at New York city’s Waldorf Astoria hotel to unveil its ’59 models. Except for 1957, when GM participated in an industry-wide show, Motorama has been held every year since 1953. This year’s New York show is slated for Oct. 16-22, after which it will moves to Boston for a 9-day run starting Nov. 8.

Chrysler announces it is buying Ford’s 15.2% stake in French automaker Simca. Ford obtained the stake when it merged its French car-making operations with those of Simca in 1954. The deal gives Chrysler a foothold in Europe and other overseas markets where demand for U.S.-built cars is fading rapidly. It also provides a hedge against the threat posed by the proposed European Common Market free-trade area. As part of the deal, Chrysler and Simca jointly will develop small cars for world markets, and Chrysler becomes the exclusive distributor for Simca models in the U.S. and Canada. Some 18,000 Simcas have been sold so far this year in the U.S. through 600 outlets, 40% of which are aligned with Chrysler-Plymouth or Dodge outlets.

Engineers attending a recent SAE meeting in Los Angles outlined their thoughts on the engines of tomorrow, with the consensus being that air-breathing hydrocarbon-fueled powerplants will continue to be the dominant form of motive power. Alternatives such as solar, nuclear and

battery-electric power sources, while within the realm of possibility, are too bulky, cumbersome, heavy and costly for use in the foreseeable future. In addition to conventional spark-ignition engines, more widespread use of diesels is predicted, especially with the impending use of turbochargers to boost efficiency. Complicating the diesel’s future is the confusing awray of fuel recommendations posted by current diesel-engine makers that will require a concerted effort between engine makers and petroleum companies to resolve. Turbine engines are seen as having great potential for producing high horsepower from a compact unit with manufacturing costs about equal to that of diesels. However, the lack of suitable high-temperature materials currently limits the engine’s efficiency. A third possibility is the free-piston turbine that offers a superior torque curve for its size. Its ability to operate on fuels ranging from crude oil to gasoline is another plus, but excessive weight is a drawback, engineers say.

In a further effort to separate its identity from those of other Chrysler-brand models, the ’59 Imperial will be built in a dedicated assembly plant. Commencing Aug. 11, Imperial output moves to Chrysler’s integrated body and assembly facility on Warren Ave. in Dearborn, MI. That plant previously built DeSoto cars, output of which has been transferred to the Detroit East plant on Jefferson Ave., where similar Chrysler-brand models are built. The new Imperial plant, housing more than 1 million sq.-ft. (92,903 sq.-m) on a single level, will build the cars at a rate of 27 hourly.

The national Automobile Dealers Assn. has called on members of the Automobile Marketing Practices subcommittee of the of the Senate Commerce Committee to initiate legislation ending two “unfair” marketing practices. Saying the practices hurt both dealers and consumers, NADA is seeking an end to: (1) the sale of cars to non-dealer entities such as fleets and leasing agencies at prices below those charged to dealers and (2) factory-owned retail outlets and escrow dealerships, along with factory-owned and operated diagnostic centers. NADA says that even when the low-price fleet deals are channeled through dealers, the retailers receive only a nominal fee for preparing the cars for delivery.

New lighting concepts to enhance safety are being researched by automakers, the federal government and suppliers. Among them is an integral leveling system that would allow the driver to easily adjust headlamp aim from inside the car. This would allow operators to properly aim headlamps in cars with heavily loaded trunks or cargo spaces to avoid blinding on-coming drivers. Other innovations being looked at include a specialized headlamp with brightness between that of normal low and high beams. Such a lamp could help overcome the dangers associated with “overdriving” headlamp illumination on express highways, while avoiding undue glare. Lighting experts say that at the average freeway speed limit of 70 mph (113 km/h), driver reaction time and brake-system limitations put the stopping distance beyond the area of low-beam illumination. Other concepts being studied include dual-intensity brake lights that glow brighter in daylight, and relocating brake lights and turn signals to the rear window area. Rear lights that glow green as the car moves forward under power, then change to amber during coasting and then to red as brakes are applied (the harder the braking effort the brighter the light) is also being studied.

Several of Chrysler’s Dodge and Plymouth models will feature a optional “mod” vinyl roof with matching interior trim in model year ’69. Among Mod Roof selections will be flowered and geodetic patterns in various colors. Initially they will be offered on compact and intermediate Dodge and Plymouth cars.

New imports headed to the U.S. in ’69 include Volkswagen’s first 4-door model, the 411. It will be offered in sedan and wagon body styles, both powered by a rear-mounted, air-cooled H-4 engine. Ford is expected to debut its new British-built Escort in a price range below that of the Cortina, and Buick’s German-built Opel Kadette will offer an optional automatic transmission for the first time. At the same time, Chrysler is slated to introduce the new front-drive Simca 1100.

American Motors may be on the threshold developing a subcompact model to better compete with the rising tide of import cars. At the press unveiling of the automaker’s ’69 models, AMC’s chairman tells reporters “the public, by its purchase of import cars, has made it clear that the era of small cars, or still more personal transportation, is here,” adding “we are developing imaginative new products not necessarily conventional in terms of today’s accepted automotive configurations.” A small car is expected to be part of the new-product development program for which AMC is negotiating a $450 million long-term loan, reportedly from private sources. The executive also advocated launching a 20-year $250 million urban highway building program as part of the effort to revitalize U.S.  cities. He said that whether for public or private transportation, new urban highways would give core-city workers wider access to suburban employment opportunities as well as create immediate job for “hundreds of thousands” in highway construction and supplier industries.

The 80-mpg (2.9L/100 km) super car being developed by the Partnership for a New Generation of Vehicles, a Big Three-government venture, will likely be a hybrid electric model, insiders say. Recently set guidelines call for a 6-passenger sedan with moderate acceleration that can travel 380 miles (612 km) on a single fueling, based on the ’94-model federal drive cycle. Due in 2001, it is expected to be about the size of the current Chrysler Concorde, Ford Taurus and Chevy Lumina. PNGV guidelines also require the car to have drivability and NVH levels equivalent to current production models. In addition, the car must be capable of being homologated for sale in major export markets.

Chrysler will spend some $100 million-plus promoting the Eagle brand in model year ’95, more than three times the amount spent in ’94, according to Edwin H. Brust, General Manager of the Jeep-Eagle division. The plan is to boost Eagle sales by at least 50% over the 60,000 sold in ’94, to between 90,000 and 100,000 units. The goal of the campaign is to “get people talking about the vehicles and get more consumers to take test drives.” Consumer clinics indicate the division’s biggest hurdle is lack of Eagle brand awareness. To that end, Chrysler has established the Eagle Information Center to answer questions and promote test drives. It is linked to the Eagle advocate at each of the brand’s 2,250 dealers. Brust also hopes to lure more Jeep owners to the Eagle brand “because their demographics parallel where we want to go with Eagle.” Right now, he says, most Jeeps share garage space with Lexus, BMW or other import models.

The redesigned Geo Metro/Pontiac Firefly/Suzuki Swift have begun rolling off the final assembly lines at CAMI, the GM-Suzuki joint-venture plant in Ingersoll, ON, Canada, says WAR in its Aug. 22 issue. The facility, which also makes the Geo Tracker/Pontiac Sunrunner/Suzuki sidekick SUVs, will reach its scheduled output rate of 200,000 annually by November. Geos are sold through Chevrolet dealers, while Firefly and Sunrunner are marketed only in Canada. Chevrolet General Manager Jim C. Perkins says output of Geo Metros alone could increase to as much as 100,000 units in model year ’96. The restyled small cars are designed to meet ’97 impact standards and for the first time they offer optional antilock brakes. The 4-door sedan comes standard with a new 70-hp 1.3L 4-cyl. engine, while the hatchback still is powered by a 55-hp 1.0L I-3.

The latest semi-annual study of U.S. dealership operation by Market Opinion Research shows no-haggle pricing generates more sales than the traditional bargaining method. Salespersons at no-haggle dealers indicate they are happier with their jobs than their counterparts, with Saturn sales personnel having the highest overall job satisfaction. In other areas the survey finds: staff retention plans don’t retain salespersons, although they improve morale; many sales representatives are unhappy with job benefits and, on average, only 7% of  of the salesforce are women, although that increases to 16% among Saturn dealers. Salespersons have worked for their current employer an average of 32 months, with overall job tenure averaging five years.