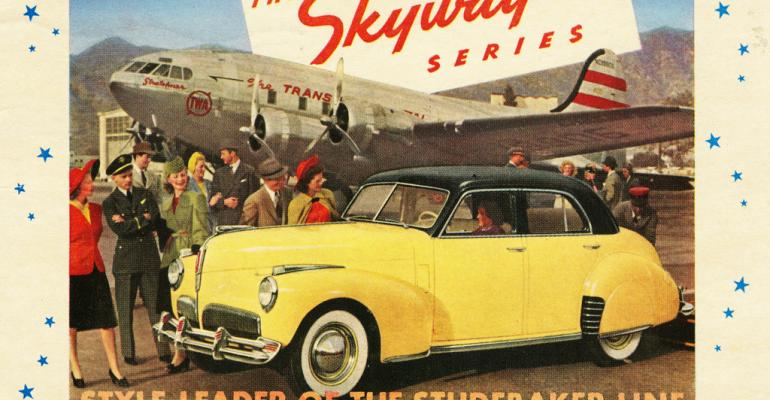 After a year of trying to sell its small cars through its network of appliance dealers, Crosley, a major manufacturer of audio equipment and home appliances, is in the process of signing traditional auto dealers to handle the ’41 models. The new Crosley cars now will be available in six body styles priced from $299, excluding tax and freight. The automaker says about 300 units will be built this month and a like number in September. Future output rates will be based on demand from the newly appointed dealers. In the ’40 model year, Crosley built 1,600 cars. The ’41 models have been redesigned to a “marked degree,” according to the company, with both the body and chassis having been upgraded. Murray will supply the bodies, Borg-Warner the transmissions and Waukesha the engines.

Declining overseas demand for U.S. agricultural products, due largely to the war in Europe, is expected to have a negative impact on ’41-model U.S. car and truck sales. That is due, WAR says, to farmers’ reduced purchasing power at the same time as prices for manufactured goods are rising. According to the Automobile Manufacturers Assn., farmers and residents of towns and villages with populations of 2,500 or less own 41% of all registered motor vehicles in the U.S., thus a decline in rural purchasing power could put a squeeze on new car sales in the coming year.

Automakers and their suppliers are planning as rapid as possible reconversion to civilian-vehicle production following widespread cancelation of orders for military equipment with the end of Pacific hostilities early this month. Output this month was hampered by 2-day plant shutdowns due to V-J Day celebrations that cut output sharply the week-ended Aug. 18. Ford now is forecasting production of more than double the 39,910 units it had been allotted for July-December by the War Production Board prior to all production restrictions being lifted. GM is forecast to turn out as many as three times the 95,096 units it had been allotted for the same period and Chrysler now is seen building some 155,000 units through the end of the year. However, the WPB says it will continue to control inventory of parts in short supply to ensure equitable allotment of still-scarce materials and prevent hoarding.

In addition to resuming production of heavy-duty all-wheel-drive trucks for industrial and commercial use, Marmon-Herrington says it will launch output of two new models with gross vehicle weights of 27,000-lbs. (12,247 kg) and 22,500 lbs. (10,206 kg). Also on the agenda is conversion of Ford medium-duty trucks to 4- or 6-wheel drive. In addition, MH will again make available 4-wheel-drive conversions of Ford light-duty pickups and station wagons.

“The mid-summer sales spree and ’55-model cleanup campaign is costing the automotive industry a record $40 million-plus in special sales-promotion expenses,” Ward’s says of a study it conducted among domestic manufacturers. The tally, as high as $10 million for one make, includes the cost of factory-sponsored sales-incentive contests and bonuses, but excludes any bonus provisions included in franchise agreements. As a result of the study, the publication says (1) it expects the use of such contests will increase in intensity in 1956 and beyond and (2) the use of bonus stimulators will become more widespread as a factory aid to dealers.

At an average selling price of $530.61, air conditioning systems, including kits shipped to dealers, have been factory supplied in a record 176,904 ’55-model cars, a 208% gain from 57,469 in ’54. Based on suggested retail prices, Ward’s estimates factory air added some $90 million to automaker coffers in ’55. At the same time, independent air-conditioning suppliers reportedly have shipped some 55,000 units for dealer installation in ’55, up from 21,000 in ’54, and are forecasting 85,000 in ’56. To further enhance sales, GM reportedly is working on a simpler, more efficient self-contained package that could be located below the rear seat, for example, and plugged into the car’s electrical system similar to a home refrigerator. GM is said to be waiting for air conditioning installations to reach the 175,000-200,000-unit level before putting the new system into production, likely in the ’58 model year.

Studebaker-Packard confirms the sale of its idle Brunswick, NJ, plant to Volkswagen of America. The deal, estimated at $4.0 million, will see the former jet-engine manufacturing site changed to an assembly plant. VW plans to begin assembly of rear-engine Type 1 (Beetle) cars around the end of 1955, although a specific start date has yet to be announced. Of the 21,366 imports sold in the U.S. in January-June, 10,282, or 48%, were Volkswagens, with further increases forecast.

Associate new-car dealers, those appointed by a direct dealer with manufacturer approval, may be headed for extinction. “Certain car makers, it was learned last week, are thinking in terms of cancelling out their remaining associate dealers,” WAR says in its Aug. 15, 1955, issue. Numbering several thousand prior to WW II, those among the estimated 1,500 remaining associates that qualify will be converted to direct dealers. The others will be dropped. At present there are some 562 such dealers selling De Sotos and 700 marketing Dodges. Since the war, manufacturers have been moving away from associate dealers, who once gave automakers a vast distribution network at limited cost. Chevrolet and Olds canceled their associate dealers in 1950 and others have followed.

Based on manufacturers’ internal production schedules, U.S. truck output will reach a record 1,700,000 units this year, up 8.9% from 1964’s strike-hit 1,560,644 completions. Part of 1965’s gain is due to efforts to recover the estimated 79,000-plus units lost to UAW contract walkouts. This record outlook comes despite the loss of some 15,000 Chevrolet and GMC trucks in July due to a 3-week strike over local issues at Chevy’s Muncie, IN, transmission plant. Increased demand for commercial-type trucks for the military, due to escalating involvement in Vietnam, may be another factor behind accelerating output.

Based on information from confidential sources at AT&T, there are some 20,000 Bell System car phones now in operation in the U.S. and demand is growing faster than available frequencies will allow. Some 2,200 orders are on hold at AT&T due to band-width shortages. Los Angles is said to be the area with the largest number of “held” orders, due to the “phone’s popularity as a status symbol, with as many cars riding around with a phony antenna as there are with actual phones installed.” The system consists of a rear antenna, trunk-installed power unit and a telephone mounted within reach of the driver. The phones, not available in all areas of the country, generally have an operating radius of 35 miles (56 km).

Pontiac, in ’66, will introduce a new in-line 6-cyl. engine that “performs more like a V-8 and looks nothing like any domestic I-6 currently available.” That’s because it will be packing a belt-driven single overhead camshaft heretofore seen mainly on some import models. The standard version of the 215-CID (3.5-L) engine produces 160 hp, but a 207-hp variant, sporting a 4-bbl. carburetor, will be offered in certain models. Pontiac says the engine is more powerful and delivers better fuel economy than the conventional I-6 it replaces. The automaker also says it is researching a similar design for a future V-8.

With profits on the skids, American Motors is expected to re-image itself in an attempt to end “the perception it is a 1-car automaker.”  Some AMC executives also feel its “economy image” is hurting sales at a time when “model proliferation, luxury, speed and ‘heck with the cost’ is the prevailing attitude of new-car buyers.”  Commencing with ’66 models, AMC will stop attaching the Rambler moniker and thus its lineup will consist of three distinct models: American, Classic and Ambassador. Each will offer new 2-door hardtop variants, including the sporty American Rogue, performance-accented Classic Rebel and luxury-trimmed Ambassador DPL. In addition, AMC is said to be reconsidering its long-time opposition to car racing.

The International Harvester Scout, Kaiser Jeep and Ford’s new Bronco soon may be reclassified by the U.S. government as cars instead of commercial vehicles. The automakers are lobbying for the reclassification because it would qualify the models for the lower excise tax levied on cars. The recent tax cut does not apply to trucks.

Robert C. Stempel, GM’s new chairman says “the ‘90’s will be a time of adapting and aggressively building on what we have in place,” adding, “there is still much to be done  and we will continue our efforts to improve quality and offer GM customers the best in personal transportation.” At a press conference, Stempel and other high-ranking executives say they are not interested in more diversification or reorganization; they will reduce layers of management and move decisions down the chain of command; Saturn cars will someday be exported to Europe and GM assembly plants will run at 100% capacity by 1992. While they also say there are no more plant-closing announcements to be made, they stop short of saying no more facilities will close.

A WAR survey of domestic-make light-truck engine use at the midpoint in the ’90 model year shows 4-cyl. engines powered 11.7% of 3,017,098 light trucks built in North American for the U.S. market during the survey period. Of the seven 4-cyl. engines tallied, one still retained a 2-bbl. carburetor, one had multi-point fuel injection (MFI) and 5 featured throttle-body injection (TBI), including the single turbo variant. Six-cyl. engines powered 49.6% of the ’90-model light trucks surveyed: One carbureted, three TBI and eight MFI, including the lone turbodiesel. V-8s were in 38.7% of  the ’90 models, five of which were TBI, five were MFI (including three turbodiesels) and one retained a 2-bbl. carb.

At a press conference for the launch of the automaker’s redesigned ’91 minivans, Chrysler Chairman Lee A. Iacocca tells reporters talks are on-going with Fiat, Volvo and Renault, but there are no immediate plans for a merger. In response to reporters’ questions, Iacocca says, “I think over time everybody will need some kind of affiliation or partnership.” He also says that does not necessarily mean an equity stake.  Asked if Chrysler will cease to exist in its present form, Iacocca opines, “I wouldn’t want to predict the future today. Maybe in the year 2000, the way things have evolved in the last 20 years, you might see some giant mergers.”

GM has bailed on the much anticipated Beretta convertible, being developed jointly with Masco subsidiary Cars & Concepts. According to Masco, which has some $20 million invested in the project, the car was sidelined by a 19% decline in sales of Beretta and its 4-door counterpart, Corsica. Chevrolet now is left with three ragtops, including the diminutive Geo Metro, Camaro and Corvette. The open-top Beretta was to be aimed at the midprice market against Ford Mustang and Chrysler LeBaron.