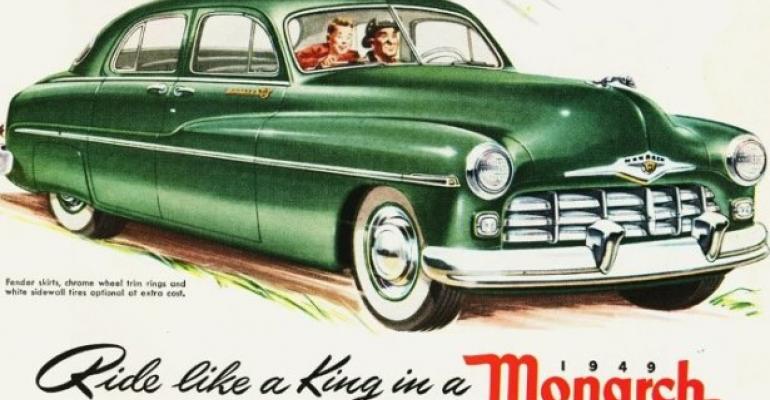 Automakers have reduced output for the third consecutive week, Ward’s Automotive Reports says in its April 10, 1948, issue. It blames the coal strike for the current manufacturing difficulties and those soon to come. So far, WAR notes, steel makers, heavy users of coal, have been able to maintain shipments at levels high enough to keep assembly plants open by digging deeply into their own coal reserves and finished-steel stockpiles. However, just two weeks later WAR reports Buick, Pontiac and Oldsmobile will shutter their Michigan plants as a result of steel shortages stemming from the coal walkout. Chevrolet is slated to follow soon after. Chrysler Car operations expect to finish out the month, while Cadillac, GMC and Dodge will continue operating until their steel supplies are exhausted. By month’s end it is estimated the strike will have cost automakers 250,000-300,000 car and truck assemblies.

At the same time, Chrysler and General Motors are continuing contract negotiations with the UAW over hourly wage increases. The union is expected to make similar a similar demand when it opens talks with Ford in the near future. While the UAW is demanding increases averaging 30 cents, WAR opines the final settlements are likely to be in range of 15-20 cents hourly.

Continental Motors may see all-time-high profits in 1948, based on the fact its production lines already are working at a record pace and the supplier has a $70 million order backlog. Automotive customers include Kaiser-Frazer, as well as truck makers Brockway, Corbitt, Diamond T, Divco, International Harvester, Mack and Ward-LaFrance. Several smaller automotive startups have expressed interest in using Continental engines, but have yet to submit orders.

Ford of Canada is gearing up production of the all-new ’49 models, 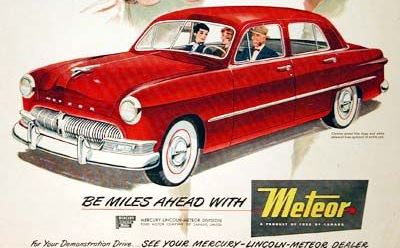 including the Mercury and Monarch. The latter is a badge-engineered midprice variant of the Mercury sold by Canadian Ford dealers. It uses the Mercury body but with a different grille and exterior trim along with unique interior upholstery. Although some new ’49 Ford cars are being built, the automaker’s complete model changeover is expected to take 4-6 weeks. The ’49 model lineup also will include a new Meteor nameplate. Sold by Canadian Mercury dealers in a lower price slot, Meteor uses a Ford body shell with Mercury-style grille, modified exterior trim and a more upscale interior.

April 1958 (59 Years Ago): Taunus for U.S.; Domestic Small Cars; Convertible Share Stable; The Fin Is In

Ford says it will import six versions of the Taunus small car to be sold through select Mercury-Edsel-Lincoln dealers. Built by Ford of Germany in Cologne, Taunus is 30 ins. (762 mm) shorter than a standard North American Ford and 1,000 lbs. (454 kg) lighter. Sales of 2- and 4-door sedans and a 4-wagon are set to begin in May, in standard or Deluxe trim. It is powered by a 1.5L I-4 engine developing an estimated 55hp. Taunus will be sold in addition to the line of English Ford models marketed through select Ford dealers.

In an April 21 Special Bulletin, WAR tells readers to expect home-grown small cars from Chevrolet, Ford and Chrysler, but gives no timetable for their introduction. The newsletter says it has been informed Chevy is working on a 102-in. (2,591-mm)-wheelbase 4-door sedan. While the engine is still “a deep, closely held secret,” it likely will be a new light-weight design. Although a horizontally opposed air-cooled 6-cyl. has been predicted, WAR says, “This would seem quite unlikely since Volkswagen’s 4-cyl. powerplant is regarded as very noisy and the decibel rating of an air-cooled ‘six’ would be at least one-third noisier.” The publication speculates GM may decide to produce locally a version of the 105-in. (2,667-mm)-wheelbase Holden small car it builds in Australia. Ford is readying a 106-in. (2,692-mm)-wheelbase car powered by either a water-cooled H-4 or a version of the automaker’s “highly efficient” I-6.

Despite a significant decline in domestic car production of 31% in the first quarter alone, the convertible is maintaining the same 4% share of ’58 model year through March as it captured in the entire ’57 run, according to a WAR survey. Soft-tops accounted for only 3% of ’56-model output. Overall, GM’s share of the convertible segment has risen to 56% of the 106,388 units built in the ’58 run through March. That is up from 45.8% of the 217,149 open-top cars turned out in ’57. Chrysler also has increased its share of convertibles to 9.5% from 8.5%, while Ford’s has fallen to 34.5% from 45.7%. American Motors and Studebaker do not build convertibles. Based on the most recent output tally, industry convertible production is likely to total some 150,000 at the end of the ’58-model run, down 30% from the prior year. Still the convertible’s current 4% penetration rate is expected to hold steady.

The “fin is in,” according to Ward’s. The publication says the tailfin likely will be the auto industry’s “styling motif” for 1960 and beyond. Chrysler, it notes, will incorporate the look in its redesigned ’60 models, while GM and Ford will do the same with their ’59s.

Reports from Japan indicate automakers there are concerned that U.S. car manufacturers may try to leverage their many patents to gain access to the Japanese market. With many of the Japanese producers’ “basic technology” derived from U.S.-originated tech, the Japan Automobile Manufacturers Assn. is calling for “immediate steps” to prevent what it calls “the patent monopoly by foreign vehicle producers.” JAMA is said to be anticipating a surge in patent-infringement claims from overseas.

The front seats of Volvo’s new, longer and wider 145S wagon feature an anti-whiplash design. The seats incorporate a special friction clutch which allows the seat-backs to recline at a controlled rate in the event the car is struck from behind. In addition, the seats also utilize head restraints and the 3-point safety belts pioneered by Volvo in the late 1950s. In addition, the seats offer the ability to increase or decrease tension of strips imbedded in the seatbacks to make them more comfortable to occupants.

Electric Fuel Propulsion plans to commence building some 50 fiberglass-bodied electric cars daily at a plant in Detroit by early 1969. Output gradually will increase to 100 daily. EFP’s first customers are expected to be utility companies. Ferndale, MI-based EFP already makes an electric variant of the Renault R-10. The new car will be built on a 120-in. (3,048-mm)-wheelbase platform. It will be powered by lead-cobalt batteries in a new low-profile configuration that fits below the floor. Dubbed Mars II-A, the upcoming model will have a top speed of 80 mph (129 km/h) with a range of 140-220 miles (225-354 km). EFP says it anticipates the battery can be recharged to 80% capacity in 20 minutes.

The aging Aerostar minivan will remain in Ford’s product lineup for the immediate future after the automaker’s Board of Directors votes to retain the vehicle. Keeping Aerostar in production at the St. Louis, MO, plant will cost Ford an additional $275 million, including $120 million for a second body shop. That brings total investment there to $675 million. Instead of ending in August as planned, Aerostar output now will be reduced from 200,000 units annually to 100,000 to make room for the Explorer. Ford says all Aerostar variants, including passenger and cargo models with rear- or all-wheel-drive, will remain in production.

Chevrolet Marketing Manager S.D. McEvoy expects the redesigned ’95 Cavalier to be a sellout in its first year on the market. The revamped model will initially be built at plants in Lansing, MI, and Lordstown, OH, at a combined rate of 285,000 annually. While that won’t be enough to allow Cavalier to beat the Ford Taurus (360,000-plus in 1993) as the top-selling car in the U.S., McEvoy believes Chevy dealers will sell every one the factories can produce. However, within a few years, the Chevy official expects to have the capacity to build 385,000 Cavaliers per year, giving it a shot at the title. The new model is slightly shorter than the ’94 variant, but is wider and has a wider track. The 2-door coupe and 4-door sedan will be launched in the fall, followed by the sporty Z24 coupe and convertible in spring 1995. By the time the midyear models come onstream, an optional high-output DOHC Quad 4 engine will be available in addition to the standard 2.2L 4-cyl. engine.

Hyundai has decided not to build the next-generation Elantra at its idle Bromont, QE, Canada, assembly plant. The automaker says it is not economically feasible to make the car there, but will undertake a yearlong study on what to do with the facility. If the plant does not resume production, Hyundai could be liable for repayment of $35 million in subsidies it obtained from the Canadian federal and Quebec provincial governments. The grants were given on condition the plant would employ 1,200 workers building 100,000 units annually. From 1989 through fall 1993, Bromont built Sonata sedans for sale in the U.S. and Canada, but annual output never rose above 28,201 units and it never employed more than 841 workers.

Volkswagen of American tells WAR it is keeping a close eye on sales of VW diesel cars in Canada as it decides whether or not to reintroduce the oil-burners in the U.S. Diesels powered 40% of the Golf and Jetta models sold in Canada in 1993. If VW decides to re-introduce the diesel in the U.S. it would be a 50-state model, says VW U.S. Vice President Thomas W. Shaver. If the diesel does reappear it likely will be the 90-hp, 1.9L TDI variant now sold in Europe, not the engine offered in Canada At the introduction of the new Golf Cabriolet and Jetta GLX, Shaver says Volkswagen needs a “little more time” to sort out its image in the U.S., but doesn’t deny the automaker is positioning the new models as less-pricey alternatives to certain BMW cars. While he refuses to say if an SUV is in the cards with in five years, he promises the brand will develop more stylish products that appeal to U.S. buyers as a means of reaching its 100,000-unit annual sales goal.