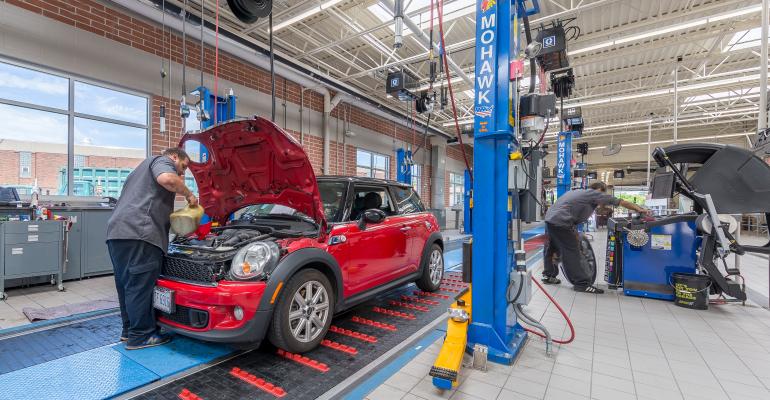 Family-owned Motorcars&rsquo; goal is to not only use the assembly line itself but also sell the setup to other dealerships.

Taking a cue from how cars are made, a resourceful dealership has created an assembly line for servicing vehicles.

Motorcars Honda came up with the idea in part to speed up its express-maintenance operation. The dealership currently is beta testing the system. It goes live in a few weeks. Longer-term plans are to sell the system to other dealers.

“It hasn’t been done before, and it has turned into an unbelievable project for us,”  says Trevor Gile, a partner with his father at Motorcars Honda, located in Cleveland Heights, OH. “We’re still putting the finishing touches on it, but I think we’ve got the secret sauce.”

The line consists of six stations for light service work such as oil changes, tire rotations, tire balancing and express detailing. Vehicles move on a belt from stop to stop. Gile likens it to a car wash.

Each station is the equivalent of 3.5 to four service bays, he says. “Work that could take up to two hours can be done in 30 minutes.”

Using its own data and the Opentrack platform, the dealership created its own software to run a well-stocked assembly line.

“The software keeps things running,” Gile says “The assembly line is away from our parts department, so we had to find a way to keep it quickly stocked. We’re working with a company that provides something similar to a vending machine that will dispense things like oil filters.

“We need to know precisely what parts are out there so the assembly line doesn’t slow down because we’re running out getting parts. That would slow the whole process down, and back up other cars.”

The assembly line includes a sidelines walkway so customers can watch technicians service their vehicles. If technicians find the need for more involved repair work and customers consent to it, vehicles will go to the dealership’s back shop. “It feeds cars to the main shop,” Gile says.

Sharon Kitzman, Dealertrack’s vice president and DMS general manager, recalls when DMS strictly served as a dealership accounting system. It has branched out to other dealership operations over the years.

“It has expanded to parts, service, F&I and all of the departments,” she says. “The biggest change is mobility, the ability to access DMS whether you are at the dealership or not. You have full access because we are cloud-based.”

The family also owns several other businesses including car washes and Motorcars Mobility, a provider of wheelchair-accessible vehicles. The various enterprises employ 250 people at 12 different locations. The two dealerships sell about 450 vehicles a month and services thousands.

“My father has always been a very progressive thinker,” Trevor says. “That allows us to create a vision for new business opportunities.”

In July, Motorcars Honda was certified as the world’s first carbon neutral dealership. Solar panels supply 70% of its power.

Trevor Gile has spent most of his career in sales. But when a veteran service manager left the store, Gile filled that position for four months.

“It opened my eyes to different aspects of the business,” he says. He became more focused on attracting new service-department customers and retaining current ones.

“We looked at the numbers, and saw we were losing business to independent shops and places like Jiffy Lube,” he says. “We found three reasons why they leave: speed, price and relationship. We wanted to find ways to address that.”

That’s how the idea for the assembly line came about.

It addresses the speed element, but it also allows the dealership to create more price value, because junior technicians, under senior technician supervision, do much of the work, he says.

“As far as the relationship part of it, if you go to a mom-and-pop shop, odds are you know the mechanic working on your car,” Gile says. “At a dealership, 95% of the time they have no idea what the technician looks like, even though he’s only 20 feet away on the other side of the wall. So we created the walkway where the guests can interact with the technicians and use kiosks and TVs to see exactly what’s going on.”

Then there’s the prospect of selling the system to others.

“Automakers have shown an interest in it,” Trevor Gile says. “So have tire companies such as Bridgestone and Goodyear. In 2017, it will be available for dealers to install it at their facilities.”