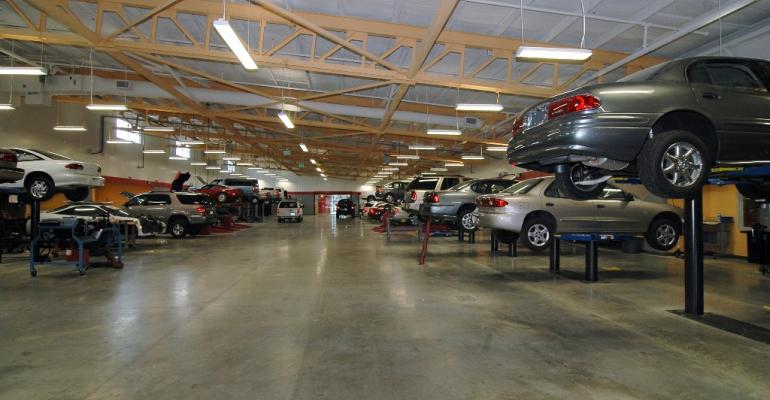 Dealer associations and colleges team up to train today&rsquo;s auto technicians, who are in short supply.&nbsp;

The technology in cars becomes more complex each year. A basic compact car comes packed with electronics. Luxury models are rolling communication devices.  Finding the right people to service these vehicles is an ongoing struggle for dealerships.

“There is a real shortage of automotive technicians,” says Gary Upton, supervisor of the Toyota Express Maintenance Program at Toyota of Orange in Southern California. “This business is getting very technical.”

To help solve the tech-shortage problem, several local dealership associations and dealerships themselves have formed partnerships with community colleges to turn out the type of service technicians needed.

Today’s service tech is far from the grease monkey of days past. Up to 50 computers are in one vehicle, Upton says. Technicians work with scan tools, essentially laptop computers that diagnose vehicle problems.

“Everything is electrical and electronic,” says Upton who started working on Toyotas in 1980.

Collaborating schools agree to a rigorous program that includes hands-on training and internships, he says.

Most of his techs have college degrees at some level, he says. “We promote college education.”

Toyota of Orange belongs to the Orange Country Automotive Dealers Assn., which starts even earlier in tech training.

The Central Florida Auto Dealers Assn. has gone a step further. It built its own tech-training center at a local community college. The CFADA Professional Automotive Training Center at Seminole State College in Sanford, FL, is housed in a $10.4 million, 55,000-sq.-ft. (5,109-sq.-m) facility that includes a 19,200-sq.-ft. 1,784-sq.-m) shop with 33 lifts.

“It is no secret in the industry that we have a tremendous shortage of service technicians,” says Barbara A. Miller, the CFADA’s executive vice president who helped spearhead the effort.

The center offers a 2-year degree, 1-year certification program and training for specific auto manufacturers including General Motors and Ford.

The CFADA visits local high schools to recruit students. Miller says she wishes more auto industry participants would help get the word out about job opportunities as service technicians.

“The automotive industry is the best kept secret,” she says

Sinclair Community College in Dayton, OH, has an auto technology program that offers a variety of certifications.  It has been “very beneficial”  for her group’s General Motors franchises, Jenell Ross, president of Bob Ross Auto Group in Dayton, tells WardsAuto during the Women in Automotive conference in Orlando.

But the program is focused on domestic brands, and the Bob Ross group also includes a Mercedes-Benz franchise.

Finding qualified technicians “on the Mercedes side has been a little more challenging,” says Ross. “We’re having to do more of our own training.”

There is a Mercedes technician training center in Chicago. But getting graduates to move to Dayton can be tough, she says. And even if her group does land a graduate, they need more training.

In California, where import brands account for 73% of the market, local community colleges are training techs to work on those brands. Fletcher Jones Motorcars, a big Mercedes-Benz dealerships in Newport Beach, CA, partners with nearby Santa Ana College’s automotive technology program.

The dealership works with the college to groom its own techs, he says, including having students work in the dealership while they are studying. They rotate through trainers, changing every six months during the 2-year college program.

Swistak, 63, has been in the service industry 41 years. Today’s technicians have to be much more computer oriented than in the past, he says.

“They do a lot more electrical diagnosis,” he says.

Service techs and tech training programs also must keep up with evolving drivetrain technology.  “What used to be advanced is now part of our regular education,” says Max Serrano, an auto tech instructor at Santa Ana College.

Rather than create new programs for each new technology, which would require a complex approval process, Santa Ana College adds content to its existing classes, says Serrano.

For example, when hybrids started becoming popular, he added four hours of instruction on regenerative braking. That has expanded to 16 hours.

He credits the partnership between local dealerships, the OCADA, and the college with making the Santa Ana program a success.

Dealerships have provided parts that contain new technology for students to work on and a storage unit to keep tools and training materials in.

Some dealerships also offer internships and help students pay for books and tuition. Serrano sees these kinds of partnerships as the best model for tech training going forward.

Just attending manufacturer’s tech training programs is no longer sufficient, he says, stressing the need for college. “The industry has changed so much. Our text book is one of the highest reading levels on campus.”