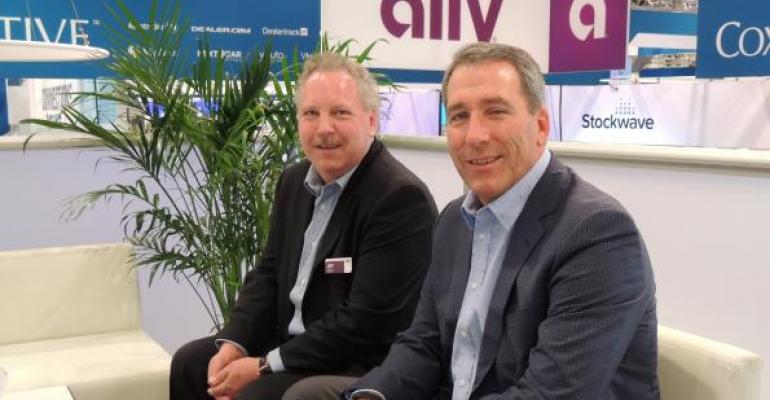 More Types of Shoppers Get Financing, Then Pick Vehicle

WardsAuto speaks with Tim Russi, Ally&rsquo;s president-auto finance, and Clearlane founder Jeff Danford about a car-buying process that started at dealerships&rsquo; special-financing operations but now is online and appealing to more than just the credit-challenged. &nbsp;&nbsp;

The standard drill at car dealerships’ special-finance operations is that credit-challenged customers first get loan approval, then pick out a vehicle at a price that falls within their financing limitations.

It is the opposite of how many customers of good credit standing do it: pick the car, any car, then work out the financing.

But that’s changing. More and more people, regardless of credit scores, get a loan prequalification first, then select from a range of vehicles with stickers that sync with that financing.

Moreover, many of those people are doing it online. Ally, a major auto lender, has launched Clearmatch, which allows Internet users of all credit stripes to digitally shop for financing, then vehicles.

“It’s another piece of the equation to help dealers do business digitally,” says Tim Russi, Ally’s president-auto finance. “We drive those consumers into the dealership essentially as a live lead.”

With Clearmatch, online shoppers get pre-qualified for financing and then browse inventories of participating dealers to find a vehicle in their price range. Once they select a vehicle, they can get approved for financing online.

Clearmatch is in response to new-age customer demands, particularly the desire to spend less time at a dealership during the buying process.

Dealers like it too, Russi says. “Dealerships don’t want to keep customers any longer than they have to. If people can online-shop, make decisions, get things pre-arranged and then go to the dealership, that’s great.”

WardsAuto interviewed Russi and Clearlane founder Jeffrey Danford about the new initiative and the market changes it represents. Clearmatch is a spinoff product of the Ally-owned Clearlane platform. Here’s an edited version of the Q&A.

WardsAuto: It seems like you have kept dealers as an important element of this initiative.

Russi: We’re a dealer-centric business and want to make sure we’re involved with the dealers. They add value to the transactions. That’s important.

WardsAuto: One of the benefits of doing financing first, vehicle selection second is that it prevents customer delusions from happening, of someone falling in love early on with a vehicle they can’t afford.

Russi:  Yes, but I think of it differently. I want them to be able to finish a transaction. You don’t want to disappoint. We create the process. If it doesn’t get done because they get locked on a vehicle that isn’t necessarily the best vehicle for their budget, why do that? That feels like brain damage at the end.

Instead, we do a soft credit pull. We give them a range, essentially saying, “You can get a deal done at this level.”

WardsAuto: Presumably you do it politely. There is a psychological way of saying, “No, you don’t qualify for this, but you are eligible for that.”

Russi:  I get it. We’re trying to create a positive experience. That’s the game. I want to do business where we get it done. Everyone is thankful when that happens.

WardsAuto: How does it work exactly?

Danford: It’s a self-service model with five lines of information that doesn’t include Social Security number. We’re able to pre-qualify them on a soft (credit) pull. It doesn’t affect their credit score.

Say they’re pre-qualified for $35,000. We then show them Ally dealer inventory that fits in that realm. We’re sorting it for them. They pick a car. We get them (formally) approved and send them to the dealer with an approval certificate.

The dealership fulfills in a traditional way, selling add-on products just like they would today. The dealership doesn’t have to change processes at all, although the sales process is truncated, because the customer has already selected a car. The dealership can spend time on other things, such as explaining how the technology on the car works.

The benefit to dealers is they get an incremental sale. The customer wasn’t on their website. They are coming to our website and we’re routing them to the dealership.

WardsAuto:The model of financing before selecting a car is rooted in subprime operations. But the difference here is that consumers using your website are not all credit-challenged.

Danford:  Our average customer’s FICO score is around 700. These aren’t 580 customers. We get those. But we also see the full spectrum. For whatever reason, they are saying, “I want to understand what I can qualify for before I walk into the dealership.” This is a specific type of customer we’re targeting with this initiative using (among other things) direct mail and digital marketing.

WardsAuto: Customers are nothing if not varied. How would you profile the customer who gets the financing first, then picks the car?

Danford:  There are two categories. Some of them are special financing. They don’t really know how much they can afford. They want the anonymity of an online 24/7 transaction, instead of going in and perhaps being embarrassed at the dealership. That’s certainly one of the customer profiles.

But then there’s the other profile. They are college-educated, $100,000-plus income, homeowner. They are buying vehicles like Honda Accords, Audi A4s and Ford F-150s. They just want to “range” that transaction before going to a dealership.

Increasingly, it’s people who are accustomed to Amazon and want an online experience 24/7. It’s not that they are running away from an experience at the dealership. They are happy with the dealership we’re routing them to for fulfillment. They’re just looking for that 24/7 response.

Russi:  Think of mobile orders on Starbucks. You order it, then go to the store and pick up your order without waiting in line. That’s the mindset. That’s a huge growing population. Companies are conditioning customers to do stuff before they show up. That’s another systemic change in consumer preferences. Nobody likes to wait in lines.

WardsAuto: Especially in a line outside the F&I office during a busy day at the dealership.

Danford:  We’re meeting people where they want to be met.

Russi:  And for those who want to do it in the traditional way, great. We’re doing well in that model, too.

WardsAuto: Jeff Danford, yours was a relatively small company when Ally acquired you. When was that?

WardsAuto: You probably remember the date.

Danford: I always wanted to do a dealer-centric product, but without Ally’s distribution and sales force and the 18,500 dealers who are Ally clients, without those assets in place it would have been a hard road.