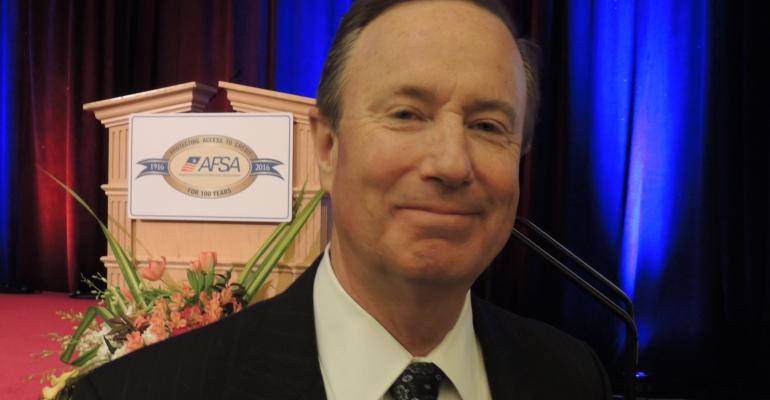 American Financial Services Assn. CEO tells why it is battling a regulator so hard. &nbsp;&nbsp;

He believes his side is gaining ground in its ongoing fight with the U.S. Consumer Financial Protection Bureau, a creation of the Dodd-Frank Act of 2010.

Stinehart tells why he thinks the tide is turning. But in explaining the financial community’s determination in the dispute, he tells an anecdote about a conversation he had with CPFB Director Richard Cordray.

“He asked me, ‘Why hasn’t the industry changed more (on this issue)?’

“I said, ‘I’ve worked in Washington for 35 years. Usually when there is a (regulatory-driven) change, our members knew they had done something wrong. But here, the big difference is the industry doesn’t think it has done anything wrong. That’s why it is fighting so hard.’”

At issue is the CFPB claim that an analysis it did showed auto-financing discrimination against minorities. The bureau says the alleged disparity stems from a practice of dealers adding extra percentage amounts to car-loan rates as compensation for acting as the middleman between lenders and borrowers.

The bureau wants to replace the so-called dealer-reserve compensation with flat fees. Critics of those say they would make lending less competitive and lead to higher consumer loan rates.

An AFSA-commissioned study involving more than 8.2 million auto-financing contracts says data fails to support the CFPB’s disparity allegations of differences in the amount of dealer reserve charged to minorities and non-minorities.

The study cites flawed methodology in the CFPB analysis.

Still, armed with its analysis, the CFPB has targeted certain lenders, including Ally and Honda Financial. They have reached multi-million-dollar settlements. In Ally’s case, it approached $100 million.

Much of that money went to sending rebate checks to borrowers who were allegedly discriminated against and overcharged. But, in an apparent indication of the CFPB analysis’ inaccuracies, some check recipients turned out to be white people who were mistakenly identified as minorities.

“It was a flawed methodology, and checks are being issued to non-minorities because they supposedly were discriminated against as minorities,” Stinebert says at his association’s annual Vehicle Finance Conference held here in conjunction with the National Automobile Dealers Assn. convention.

The CFPB continues its “assault” on the auto-financing industry but in the past two years “the dialogue has completely changed” from alleged discrimination to “abuse of federal power,” Stinebert says. “It has changed in our favor in many ways.”

Late last year, the House of Representatives overwhelmingly passed a bill that puts restrictions on perceived over-reaching by the CFPB. The Senate now is considering the legislation which has bi-partisan support. President Obama has threatened to veto it.

“I hate to characterize the CFPB as an agency run amok, but it’s on the wrong side of this issue,” Stinebert says.

Why Dealers Need to Pay Attention to Claims Yield
Nov 03, 2021