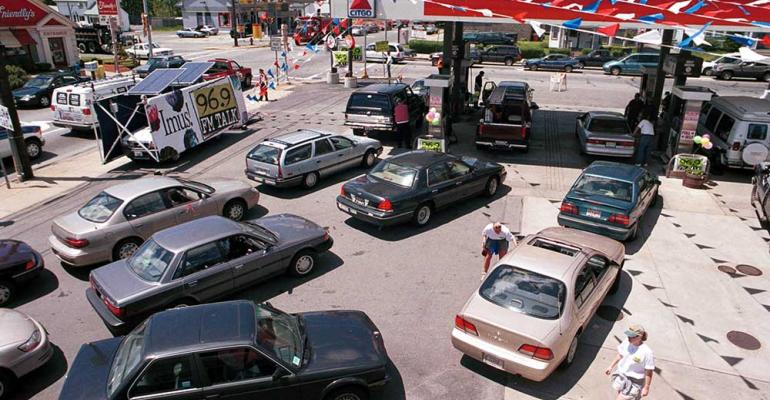 Getty Images
<p><strong>Cars line up at pumps on Memorial Day 2000. Lines like these and those seen in 1970s might recur at future EV charging stations. </strong></p>
Vehicles>Powertrain

The growing number of EVs, coupled with lengthy charge times and the inability of many EVs to accommodate various types of fast chargers could lead to 1970s style gas lines at charging stations in the future. &nbsp;

The launch of affordable long-range battery-electric cars such as the Tesla Model 3 and Chevy Bolt EV are generating breathless talk about a coming “tipping point” where BEVs will begin taking over the world’s highways.

Both cars are exciting in their own way, and a flood of advanced EVs is coming in the next few years from a variety of automakers. But their budding popularity could stall because the recharging infrastructure necessary to make EVs practical for mainstream buyers is in disarray. So far it is poorly planned, not public, not standardized and being demolished by neglect.

The growing number of EVs entering the marketplace in the next decade, coupled with lengthy charge times and the inability of many EVs to accommodate different types of fast chargers when they are available, could lead to1970s-style gas lines at charging stations in the future, says Kregg Wiggins, senior vice president-North America Powertrain at auto supplier Continental.

Why is a charging infrastructure so important if most consumers plug in at home or work? Because even 240 to 300 miles (386-483 km) of range disappears quickly and can’t meet the expectations of consumers used to easy 5-minute fossil-fuel fill-ups.

Freezing weather can sap 20% to 30% of range off the top, and so can driving in excess of 60 mph (97 km). Running the heater or air conditioner knocks off another 10% or 20%. Plus a 20-mile (32 km) reserve is necessary to avoid stomach-churning range anxiety. Then chop the remaining range in half because getting a full charge at a destination for the return drive is iffy at best.

Chargers can be occupied by other EV customers for hours or blocked-in by clueless drivers of conventional vehicles. It’s called getting “ICED.” In many instances the chargers just don’t work.

WardsAuto Editor Bob Gritzinger recently drove the Chevy Bolt EV 240 miles to the Center for Automotive Research Management Briefing Seminars in Northern Michigan from our Southfield headquarters. His drive encapsulates the good and bad about the future of EVs.

The good news is, thanks to careful planning, the car made the trek with 70 miles (113 km) to spare and zero range anxiety. That’s because along the way Gritzinger stopped for lunch for an hour to add 38 miles (61 km) of range from an inconspicuous 240V Level-2 charger hidden in back of a Dairy Queen in Grayling, MI. The even better news is he drove it 220 miles (354 km) to his home on the way back from Traverse City without charging at all, arriving with 24 miles (39 km) to spare.

The bad news is the modest Dairy Queen plug was the only one on his entire route that worked. The 240V chargers prominently displayed at his destination, the luxurious Grand Traverse Resort and Spa, were out of service. He had to use an 110V utility plug instead. It takes 60 hours for the Bolt to charge fully at 110V; fortunately Gritzinger had no immediate travel plans.

On his homeward leg, the Level-2 chargers at the Consumers Energy building in West Branch, MI, also did not work. The PlugShare mobile app showed no alternatives, so he dropped his speed from 75 mph (121 km) to 60 mph and made it home with minimal heartburn.

These problems come as no surprise to Continental’s Wiggins and others who have studied the current charging infrastructure. The industry is making great strides developing exciting EVs with lower-cost, more power-dense batteries, but if they are to reach mass acceptance, the infrastructure must be expanded and improved, Wiggins says at the recent CAR Management Briefing Seminars.

The charging network also needs to be made less confusing and vehicles need more flexible charging solutions so they can take advantage of the fastest charging rates when available, he says. The lack of standardized plugs complicates charging further. Tesla is expanding its network of chargers, but it is designed only for Tesla vehicles, a strategy akin to BMW building gas stations only BMWs can use.

Just 3% of the available chargers in the U.S. are truly public, Wiggins says. The vast majority of the current 800,000-plus chargers in the Americas are in private homes and garages, according to IHS. While this strategy serves the needs of EV fans, it will not be enough to win over mainstream consumers.

“The general public is worried about range anxiety and time anxiety. It’s not just worrying about accessibility, it’s also about how long it will take,” Wiggins says.

Residential units charge at a rate of about 0.5 miles (0.8 km) per minute. Chargers at work typically are faster, about 1.25 miles (2.0 km) per minute but even that may not be fast enough for workplaces with 4-hour limits on charging.

DC fast charging, which provides 20 miles per minute is the best solution, but those chargers are expensive to install and many EVs cannot accommodate them.

There are other small annoyances as well. Fast chargers require monitoring because they often shut down and require resetting every 30 minutes.

Meanwhile, there are 168,000 gas stations in the U.S., each with 6-10 refueling pumps capable of refueling a vehicle in a few minutes. A typical gasoline refill is equivalent to adding 125 miles (201 km) per minute to the tank.

Continental is addressing part of this issue with its AllCharge in-vehicle system that turns the electric powertrain into a universal charger that accommodates all types of cable-based charging stations.

It is basically a modified electric powertrain in which the electric motor and inverter, which switches between DC and AC power, have been specially adapted to handle the additional task of charging. The only extra component involved is a DC/DC converter, whose job is to ensure an optimally regulated power flow to the battery at all times.

It allows vehicles to always accommodate the maximum output rate of a charger, up to 800V and up to 350 kW for all types of charging stations – single-phase AC, 3-phase AC or high-speed DC current, Wiggins says.

Automakers, as was well as state and local governments are promising major improvements for EV charging in the future. Volkswagen, alone, has committed $2 billion to build 240 charging stations with 2,500 separate chargers in the U.S. over the next 10 years.

But after WardsAuto’s recent test of Michigan’s charging infrastructure, the situation promises to get worse for the growing number of EV drivers before it gets better.