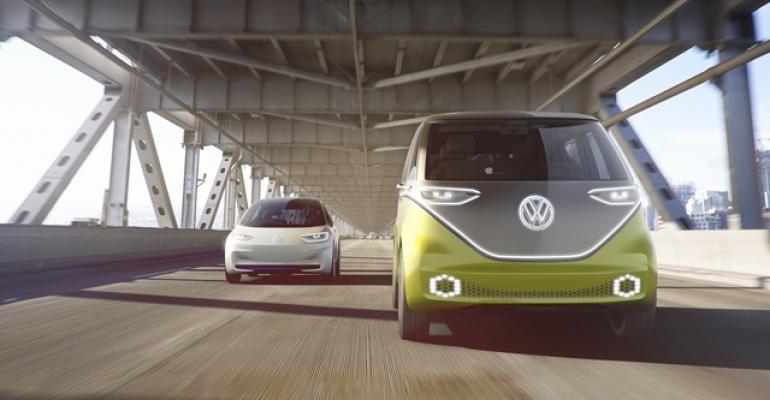 While the Dieselgate emissions scandal continues to make headlines, the automaker says it is focused on rebuilding its relationship with U.S. customers via a new line of CUV models and push into electrification.

The declaration comes even as Dieselgate continues to be in the headlines, marked on Monday by a story VW’s one-time top U.S. regulatory-compliance official, Oliver Schmidt, had been arrested by the FBI as part of its probe into the emissions-cheating scheme. Schmidt left the U.S. for reassignment at Volkswagen in Germany just before the scandal became public.

“We also were surprised by this news,” he says. “We continue to work with the agencies and the government on this.”

But while the scandal still plays in the headlines, VW officials say they are ready to move on, turning their attention to an aggressive new-product assault centered on CUVs and electrification and promising to carve out significant volume– and profitability – in North America within the next decade.

“We had a very challenging year,” Herbert Diess, VW brand chief, says here. “But we have addressed the situation. In 2017 we will make the next step forward. The most important task is to regain the trust of our customers.”

Diess says the game plan calls for 10 new vehicles worldwide and the introduction of two new models to the U.S. market every year within four years. By 2020, VW will offer four CUVs and three sedans in the U.S. that will cover the ground in four of the market’s five biggest segments, he adds.

The CUV lineup includes the new midsize Atlas, revealed late last year and priced $30,000-$48,000, and the revamped and larger Tiguan model, both of which go on sale in the U.S. later this year. The top-of-the-line Touareg model rounds out the lineup for now.

Likely on tap is a CUV below the Tiguan in size. VW showed a Golf-based model, called the T-Roc, here last year that could form the basis for the fourth CUV.

“(We’re) shifting the brand more into a family-oriented brand, giving the product (lineup) more SUVs for the A-SUV (Golf-size) segment, the B-SUV segment (Atlas),” Woebcken says. “We think we can be a very serious player in those segments.

“This exhibition is really the turning point for the brand, because we’re shifting (Volkswagen’s U.S. strategy) to a much-more business perspective.”

VW also shows its I.D. Buzz electric minivan concept as it pledges to put 30 electrified vehicles on the market by 2025.

Woebcken won’t rule out a return to diesel engines for the brand longer term, but says for the foreseeable future the emphasis is on electrification.

“(With diesel) the emissions standards year by year are getting more ambitious, which makes it necessary to invest more technology into the products,” he adds. “There will be a point where according to business economics it doesn’t make sense. So we’ve decided to concentrate and take that money and invest it right into the future in electrification.

“I don’t want to rule out (diesel) in the future, but basically we would like to look to new technologies.”

VW will launch a revamped e-Golf model with 50% more driving range in the U.S. later this year. The automaker also is embarking on a program to place charging stations around the U.S., part of its settlement with U.S. authorities resulting from the emission-cheating scandal.

“I think this will boost the whole market (for) electrification,” Woebcken says.

Executives note that despite the lack of a diesel, which once accounted for 25% of brand sales, VW deliveries in the U.S. declined just 7.6% last year.

“If you look at the sales numbers, it was really encouraging that we were nearly able to close the gap of the diesel loss…with exactly the same product range,” Woebcken says. “So that proves many diesel customers did not buy the car only for the diesel.”

The North American strategy includes building more vehicles in the region, officials say, including electrified models. But VW relies strongly on its Pueblo, Mexico, plant for supplying the U.S. market, and that could become a problem for the brand if the incoming Trump Admin. follows through on threats to tax vehicle imports from that country.

President-elect Donald Trump already publicly has put Ford, General Motors and Toyota on notice about their Mexican imports, but Woebcken expresses confidence VW won’t land in the crosshairs next.

“We are highly invested here in the U.S.,” Woebcken says, noting VW’s outlay in America will reach $7 billion by 2019, including a recent $1 billion injection into its Chattanooga, TN, factory to build the Atlas. “We’re thinking about the next derivative (of the Atlas) being industrialized in the U.S. We also have a lot of engineering and high-tech investments (locally).

“Overall, Volkswagen in the U.S., with the dealer network, is 45,000 jobs,” he says. “So we already have a strong investment in the U.S. We’ll see what the (Trump Admin.) will come up with, but we are confident that we are a really strong and good corporate citizen here in this country.”