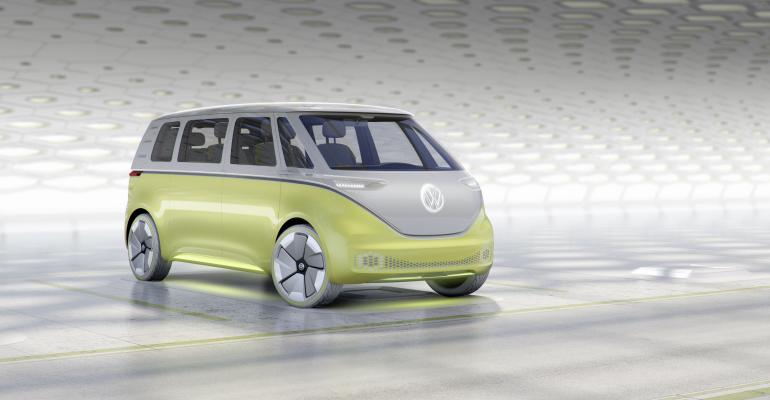 Drawing heavily on the iconic Microbus first launched in 1950 for stylistic inspiration but benefiting from a new electric-car architecture that helps maximize interior space, the I.D. Buzz forms part of a multi-model EV initiative masterminded by VW brand chief Herbert Diess, who is aiming to thrust the company to the front of the EV ranks within the next decade following the financial and image-crippling effects of the Dieselgate emissions scandal.

Featuring seating for up to eight, the tall one-box concept is the second of five dedicated electric-powered models being developed by Volkswagen, following the original 4-seat I.D. hatchback revealed at last year’s Paris auto show.

Further EV concepts from Volkswagen are expected to include a CUV, sedan and possibly a sports car.

“The Volkswagen brand’s big electric offensive begins in the year 2020 with a completely new vehicle architecture. That is when we will be launching a new generation of fully connected, all-electric vehicles on the market,” Diess says in a news release. “By 2025 we want to be selling 1 million of these vehicles annually. We are making electric mobility the new trademark of Volkswagen.”

The I.D. Buzz runs on two electric motors, one mounted at the front within the short nose section and the other within the rear-axle assembly at the rear. This provides it with AWD capability, unlike the exclusively rear-wheel-drive I.D. hatchback powered by a single, rear-mounted electric motor.

Each motor delivers a maximum 201 hp, although the combined system output is limited to 369 hp. VW says this is sufficient to enable its latest concept to accelerate 0-62 mph (100 km/h) in just 5.0 seconds. To help maximize battery charge, the top speed is limited to 100 mph (161 km/h).

Alternatively, Volkswagen says the I.D. Buzz could be configured as a rear-drive model featuring a 268-hp rear-mounted electric motor in a drivetrain layout similar to that of the I.D. hatchback.

Fitted with a large 111 kWh lithium-ion battery mounted low in the floor, giving it a lower center of gravity compared with conventional combustion-engine models, VW claims the I.D. Buzz has a zero-emissions range of up to 372 miles (600 km) on the European test cycle. That’s 41 miles (66 km) more than the automaker claimed for the similarly conceived Budd-e concept revealed at the 2016 CES in Las Vegas, which used a 95-kWh Li-ion battery.

The battery, which Volkswagen says is more efficient than the unit used in the existing e-Golf, can attain an 80% state-of-charge within 30 minutes, sufficient to provide a range of up to 270 miles (435 km) on the U.S. test cycle.

Besides providing zero local-emissions compatibility, the I.D. Buzz features the latest in autonomous-driving technology, allowing the driver to retract the touchpad-equipped steering wheel and make use of a seat that swivels 180 degrees to face the rear in what VW describes as “non-critical driving conditions” in a so-called I.D. Pilot mode that is being developed for introduction in 2025.

Dispensing with a conventional dashboard and instrument panel, the VW concept uses augmented-reality technology and a head-up display to project key information into the driver’s line of sight. Other controls, including infotainment and air conditioning, are displayed on a portable tablet. There also are touchpad panels in the four door-trim panels and outside the third seat row.

A variable interior layout allows multiple seating configurations, while two separate luggage compartments, one up front and one at the rear, endow the concept with respectable load-carrying capacity.

Entry is via two conventional front-hinged doors up front and two electronically operated sliding doors at the rear. The I.D. Buzz also features a short hood and tailgate.

The suspension uses air springs at the rear, while the 22.-in wheels are shod with sporting 235/45 profile tires.

Stylistically, the I.D. Buzz draws heavily on the design and 2-tone color scheme of the earlier Microbus. The 1-box exterior receives detailed elements similar to those featured on the I.D. hatchback, including slim LED headlamps and taillamps. Conventional exterior mirrors are replaced by camera-toting arms that help reduce drag.

The upright 8-window glasshouse also features a look reminiscent of the original Microbus with prominent pillars, with those at the rear including three ventilation ducts.