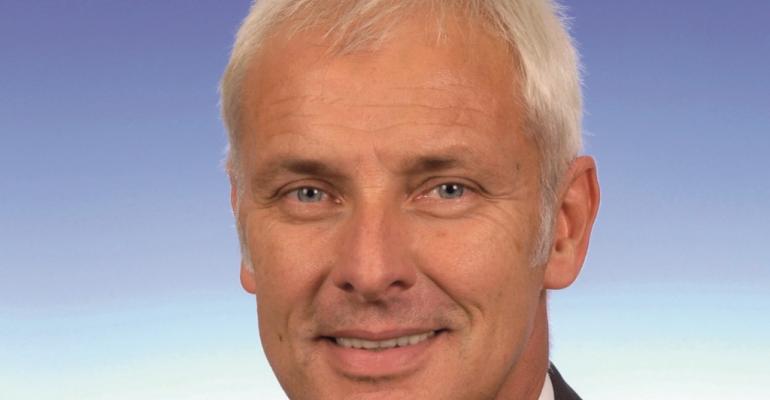 Group CEO Matthias Muller tells shareholders VW will invest heavily in an &ldquo;electrification initiative second to none in the industryˮ as well as in autonomous driving, digitalization and new business fields such as mobility services.

WOLFSBURG, Germany – Volkswagen pledges to bring more than 30 all-electric vehicles to global markets within the next 10 years, according to group CEO Matthias Muller.

The promise comes as part of the decade-long Strategy 2025 program created by the automaker, which is still recovering from last fall’s Dieselgate scandal in which some 11 million VW Group diesel cars sold globally were found to have been fitted with software producing false emissions-test results.

Speaking to shareholders at the 56th annual general meeting, Muller says VW will invest heavily in an “electrification initiative second to none in the industry” as well as in autonomous driving, digitalization and new business fields such as mobility services.

“We expect that by (2025) we will be selling about 2 (million) to 3 million pure-electric automobiles a year. This will account for a significant share – an estimated 25% – of our total sales volume. We are stepping up our efforts accordingly and will launch a multibillion-euro investment program.ˮ

‟As far as the development of fuel cells is concerned, we intend to stay on the ball in this area too. And we will be ready when the time is ripe.”

Part of the initiative will involve establishing battery technology as one of the automaker’s core competencies because it accounts for 20% to 30% of an EVsʼ value.

“We will need 150 gigawatt hours of battery capacity by 2025 for our own e-fleet alone, which would make for a massive procurement volume,” Muller tells shareholders.

“Fully autonomous vehicles with a self-driving system developed in-house will enter the market by the beginning of the next decade,ˮ Muller says. ‟Cumulative investment in new autonomous mobility solutions will amount to several billion euros.”

Yet traditional internal-combustion engines still have a role to play in the automakerʼs future, he adds: “We are also continuing our intensive efforts to enhance the environmental compatibility of our diesel and gasoline models. We will successively equip the groupʼs new TSI and TFSI engines with gasoline-particulate filters.

‟This initiative will begin with the 1.4L TSI engine in the new VW Tiguan and the Audi A5 in June 2017. This will reduce particulate emissions by up to 90%. Up to 7 million Volkswagen vehicles could be equipped with this technology each year by 2022.”

Addressing the diesel-emissions-cheating scandal, Muller says Germany’s Federal Motor Transport Authority has authorized retrofits to another 1 million vehicles, primarily Golf models. This means approval now has been issued for more than 3.7 million affected vehicles, including the VW Passat, Tiguan and Caddy, all variants of the Golf, the SEAT Exeo and the Skoda Superb plus various Audi models such as the A3, A4 and Q5.

Muller says credibility in its brands, products and “Volkswagen as a whole” is the automaker’s“most important currency” as it works to regain the trust lost as a result of Dieselgate.

Another key part of Strategy 2025 is the development of mobility-services business.

“With our investment in Gett (a taxi-hailing service), we have already taken a key first step,” Muller says. “This strategic partnership with a company that already has more than 50 million users in the fast-growing ride-hailing market is the nucleus for expanding the business.

‟In the years ahead, we will group other services such as robotaxis, car sharing or on-demand transport in quick succession around this core service. In a rapidly expanding and hotly contested market, our aim is for it to generate sales revenue in the multibillion range by 2025.”