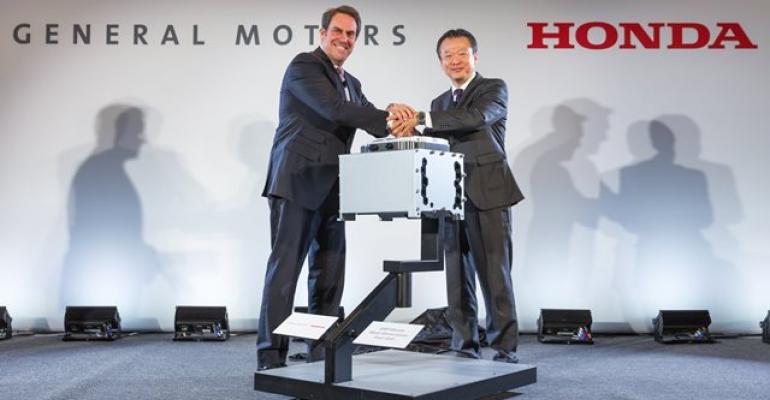 The $85 million deal bolsters a nearly 4-year-old fuel-cell R&amp;D partnership between the two automakers. Production will occur at an existing GM manufacturing facility in Brownstown, MI.

DETROIT – General Motors and Honda establish an $85 million joint venture to mass-produce hydrogen-fuel-cell systems for products in 2020, although it remains unclear how a potential easing of fuel efficiency regulations, as President Trump suggested last week, might affect the industry-first collaboration.

Trump suggested in a meeting last week with the CEOs of GM, Ford and FCA US that certain regulations could be eased to make the U.S. a more attractive place for automakers to invest in new manufacturing operations.

“We want regulations, but we want real regulations,” the president said, calling some laws on the books crazy. He was not specific.

Shortly after the election in November, the U.S. Department of Transportation and EPA pushed through stringent future fuel-economy and carbon-dioxide emissions rules written under President Barack Obama. The Alliance of Automobile Manufacturers answered with a letter to Trump urging that he take a second look at rules the industry lobby characterized as a substantial challenge.

With lackluster demand for high-efficiency vehicles because of added cost, cheap gas and sometimes performance sacrifices, forcing automakers to build cleaner cars through tough regulations is seen by many as the most effective pathway to a cleaner environment. Reuss says whatever happens in the regulatory environment, hydrogen-fuel-cell vehicles are inevitable because it is the responsible thing to do.

“We know the endgame is zero emissions,” he says. “We have to be able to get the technical solution into the hands of our customers. This is one area where we’re going to make some bets and we feel pretty good. These kinds of things are thought about strategically over a long period of time and I know Honda shares that position as well..

The GM-Honda JV, which bolsters a nearly 4-year-old fuel-cell R&D partnership between the two automakers, is called Fuel Cell System Manufacturing LLC. Production will occur at an existing GM battery-pack manufacturing facility in Brownstown, MI, about 30 minutes south of Detroit.

The automakers expect production of the fuel cell units to begin around 2020 and create nearly 100 new jobs.

“Although there will continue to be skeptics, I think we can safely say that today’s announcement officially marks the arrival of fuel cells,” says Dan Nicholson, vice president- Global Propulsions Systems at GM. “They are not a science project anymore. They’re a mainstream alternative energy choice.”

Toshiaki Mikoshiba, chief operating officer of the North American Region for Honda and president of Honda North America, says the first product from the automakers’ JV will be the fourth-generation Clarity FCV.

“We have established a challenging goal of making two-thirds of our global sales electrified vehicles by 2030,” he says.

GM does not provide details of a future product for the JV’s technology and hints it also may migrate beyond the retail automotive space. Reuss cites work GM has done with the U.S. military and aerospace and has told WardsAuto in the past stationary applications could be in the cards, too.

Fuel-cell systems, which transform hydrogen into electricity for propulsion power with zero emissions except for water, have long been seen as the ultimate answer to eliminating pollution from transportation. But size and cost have been hurdles.

GM and Honda, which lead the U.S. in fuel-cell patents, think they have solved them, but a massive build-out of a fueling infrastructure lies ahead. California leads the U.S. in fueling stations with only 30 in operation. It plans to have 100 by 2020.

“It is going to take planning and investment in the long term,” says Honda Vice President Steve Center, who heads the automaker’s regulatory and environmental activities.

As a result, consumer interest in the current Clarity, as well as products from Toyota and Hyundai, has been weak. According to WardsAuto data, 125 FCVs from the automakers were delivered last year in a market that sold 17.5 million cars and trucks.

The current Clarity is a second-gen model and went on sale in December. It is available only by lease at 12 approved dealers in California.

“I think it’s a real positive,” he says. “When you are the sole player in a technology, it is difficult to get adoption, especially in the case of fuel cells where infrastructure is required for it to really take off. We would be happy to have more players.”

– with David Zoia in New Orleans, LA, and Christie Schweinsberg in Southfield, MI