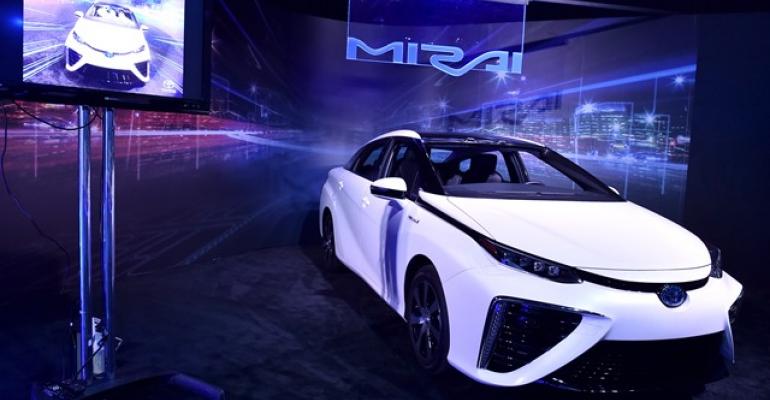 Hydrogen is plentiful and costs of the technology will come down as car-production volumes increase, Paul Van der Burgh says.

LONDON – Toyota will be placing many of its strategic production eggs firmly in the hydrogen fuel-cell basket, the automaker’s U.K. chief says.

Van der Burgh says the widespread use of hydrogen for existing functions within industry makes it a natural choice for fuel cells to take over from conventional internal-combustion engines, despite the challenge from battery-electric vehicles.

“In all these things, you’re looking for the right solution for the right application,” Van der Burgh says. “We think renewable hydrogen has many, many benefits, and not just for the output of the vehicle itself, but also for the industry as a whole, which already uses 500 million (metric) tons of hydrogen – so there’s a lot of hydrogen available already.”

However, Van der Burgh believes EVs still have a vital role to play as urban transport.

“Hydrogen won’t be a solution for all cars,” he says. “Small, city cars (won’t be fuel-cell driven), for example, because of the (hydrogen) storage requirements.

“So you’re still looking at electric vehicles for this, and plug-in hybrids would sit in the middle for slightly longer trips,” he adds. “But in the long term, hydrogen has so many benefits, combined with our normal hybrid technology, (that) we think it is the fuel of the future.

“If we are going to get to our 2050 ambition of a 90% reduction in (carbon dioxide) for global sales, hydrogen has a massive role to play.”

Toyota accepts that sales of its Mirai fuel-cell vehicle will be modest in the near to medium term, estimating global production to reach about 3,000 units annually by 2017 and increasing to 30,000 by 2020.

“The reason we are leasing them is the cost of fuel and its availability at present – it’s not easily quantifiable for a lot of people, so we wanted to take that equation out,” Van der Burgh says.

However, he foresees the price of fuel-cell technology tumbling in the same way the cost of hybrids has come down over the years.

“If you look at what we’ve done with hybrids, between generation three to generation four, there has been a very significant reduction in costs,” Van der Burgh says. “So with fuel cells, we can expect that same reduction.”

About 95% of the price of a Mirai today is related to development costs, he adds. “So this will reduce (over time).”