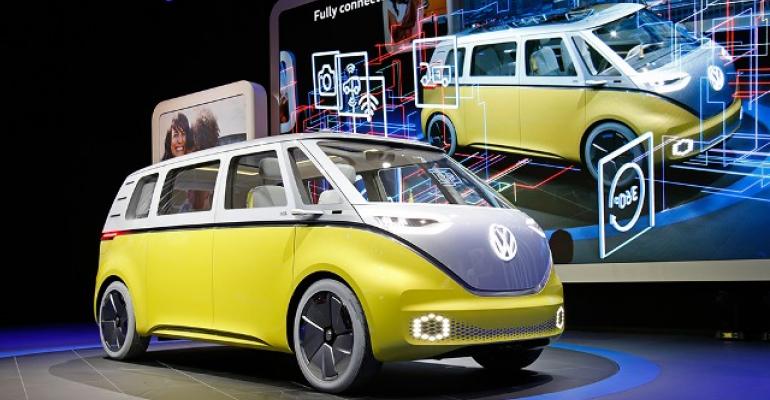 <p><strong>Give consumers more EV options that fit their lifestyle, such as CUVs and minivans, and they will buy, McKinsey says.</strong></p>
Vehicles>Powertrain

A high percentage of U.S. vehicle buyers seriously consider battery-electrics and plug-in hybrids, but don&rsquo;t pull the trigger because they can&rsquo;t find a product that precisely fits their needs, McKinsey &amp; Co. says.

Range-anxiety no longer may be the deal-breaker most believe it is when it comes to selling electric vehicles to the masses.

Give consumers more options and they will come, concludes McKinsey & Co.

A just-released study by the consulting firm, based largely on market research in the U.S., Germany and Norway, suggests a large cross-section of consumers routinely gives purchasing an EV serious consideration until late in the buying process, ultimately opting for a conventionally powered vehicle because they can’t find an EV that precisely meets their needs.

For some, limited driving range between charges continues to be a factor, but for many the decision to avoid EVs is more about the limited variety of model types available, higher purchase costs and somewhat erroneous maintenance concerns.

“Traditionally we’ve thought the big force (driving electrified-vehicle sales) is regulation,” Russell Hensley, a partner at McKinsey and one of the primary authors of the study, tells WardsAuto. “(But) what we find here is between a third and a half of consumers are actually considering electrics when they go into the purchase funnel, which is a lot higher than we ever expected.”

Specifically, McKinsey reports nearly 30% of U.S. buyers and 45% of German consumers strongly consider buying an EV or plug-in hybrid-electric vehicle when shopping for a new vehicle today, though less than 5% do. Near term, there’s an opportunity to convert more of those shoppers to EVs, the consultant says, if the industry does a better job of supplying the types of vehicles that better meet buyers’ needs.

Automakers are on their way to doing this, Hensley says, pointing to new-model product plans that call for 18 all-new BEVs and PHEVs to roll out around the world over the next two years, including several entries in the hottest market segment, CUVs. WardsAuto/AFS data shows the total number of BEVs and PHEVs available globally will double from 32 today to 64 in 2021.

“There just isn’t the diversity of selection in terms of vehicle choice (at the moment),” the McKinsey executive says. “If you want a certain amount of utility in your vehicle or you have a family of four, there isn’t necessarily the range of products you want to choose from. That’s (now) being addressed.”

To get even more buyers into EVs, the industry will have to better solve the cost and range equations, as well, Hensley admits. But that, too, appears to be in hand, he says.

“Cost has made things rather prohibitive historically. But we’ve seen dramatic declines over the last five or six years and we expect to see more, even though it’s not at the same break-neck pace.”

Some automakers have predicted the cost of an EV powertrain will pull even with an internal-combustion engine within the next five years. McKinsey is a little less bullish, predicting only that parity will be reached sometime “in the next decade.”

“When you get batteries that are in the $150-$200/kWh at the pack level, things become very, very interesting,” Hensley says.

Until then, range will remain an impediment to purchase, but McKinsey says the hurdle is more psychological than practical, and most buyers who take the leap report they no longer have anxiety about their vehicle’s limitations.

And with cars such as the Chevrolet Bolt now topping 200 miles (322 km) between charges, the industry appears on the way to eliminating concerns for an even larger number of consumers, he points out.

“If you can deliver a 200-mile range (in a vehicle) that is priced to the consumer around $30,000 (post tax incentives)…it begins to get very interesting for the consumer, and you would expect (a vehicle like that) to do quite well.”

However, there will need to be wider availability of public charging stations if more buyers are to be won over, Hensley says. “The infrastructure has got to come along, whether at home, work or elsewhere.”

Globally, public charging stations could grow from about 2 million today to 12 million in 2020, the study says, as billions of dollars will be invested by automakers in the U.S. alone over the next 10 years. That outlay includes a plan by Volkswagen Group to put $2 billion into the charging infrastructure as part of its settlement with the U.S. over its Dieselgate emissions scandal.

The industry also has to take measures to better educate the buying public, the McKinsey study concludes. About half of all car buyers don’t understand how electrified vehicles work and believe repair and maintenance costs will be higher, even though data indicates those costs run 20%-40% below that of conventional vehicles.

“Consumers are very concerned that they’ve got a $15,000 fuel tank in the battery that might go wrong,” Hensley says. “(But) the manufacturers have addressed (this) in terms of extended warranties, so once people are in (EVs) and using them they are less concerned.”

Of course, a wild card in the U.S. could be the direction of the Trump Admin. on CAFE and carbon-dioxide emissions standards. Detroit automakers recently lobbied for single, nationwide regulations that would eliminate separate standards in California and 11 other states that require sales of zero-emission vehicles. That potentially would chill the market for battery-powered cars, if ZEV bogeys were not part of a new 50-state standard.

“Regulation obviously plays a huge role (in driving the market),” Hensley admits, and he sees government subsidies likely being necessary to draw consumers to electrified vehicles at least through 2025 or so. “(But) I would say there’s an increasing demand. There’s a market to be addressed (that) is growing significantly.

“Yes, there are a few things to be addressed. (But) the industry is kind of getting it.”