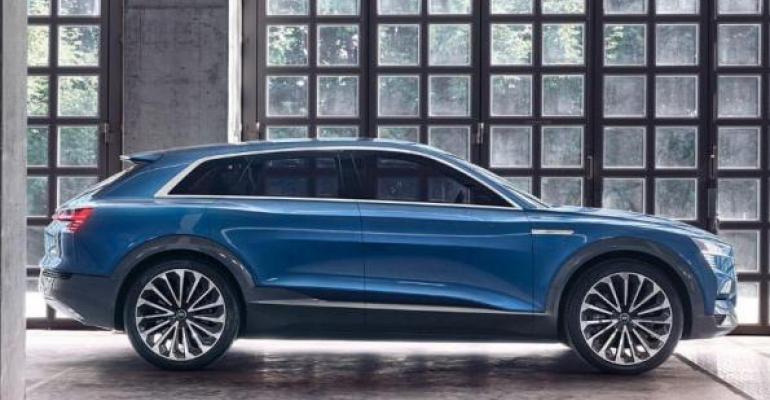 The partnership will see DriveTribe become the hub for content around Audi&rsquo;s e-mobility activity, culminating in the launch of the first Audi e-Tron EV in late 2018. The platform will create, produce and distribute content as well as nurture a community of e-mobility and Audi enthusiasts.

LONDON – Audi teams up with a U.K. social-media marketing specialist backed by the infamous trio presenters of Amazon’s The Grand Tour to help market its forthcoming electric vehicle.

It’s the first major commercial partnership to be confirmed by DriveTribe.

The partnership initially will run until December and will see DriveTribe become the hub for content around Audi’s e-mobility activity, culminating in the launch of the first Audi e-Tron in late 2018.

The platform will create, produce and distribute content as well as look to create a thriving community of e-mobility and Audi enthusiasts. The official launch of the Tribe was held at Audi’s Neuburg facility with the unveiling of its e-Tron Vision GT prototype racer.

“We are super-excited to engage Audi fans on this topic vital for the future of our brand,” says Giovanni Perosino, Audi vice president-marketing communication. “This partnership with DriveTribe signifies our commitment to consistently aim for Vorsprung (head start) in media and communication, and the dedication to deliver highly relevant content to our customers and brand audiences.”

Jonathan Morris, CEO of DriveTribe, adds: “This is a significant milestone for DriveTribe, as we welcome our first official manufacturer partner to the platform. Audi is a brand that’s widely celebrated for its heritage and style, yet boasts a position at the cutting edge of motoring, making it the perfect match for DriveTribe.

“Through DriveTribe’s community of social influencers, industry commentators and celebrities, Audi will benefit from a new way to engage with a dedicated audience and create an active and influential special-interest group.”

Since its launch DriveTribe has amassed a wide range of community-generated content from a growing number of social-media influencers, including Formula One’s Mark Webber and Damon Hill and some 53,000 amateur content providers.

In addition to the launch of its commercial partnership with Audi, DriveTime this month will begin to carry video advertising, with display and sponsorship models following soon after. With 90% of its user base accessing via mobile, advertising will run cross-platform, targeting segmented motoring and lifestyle audiences.