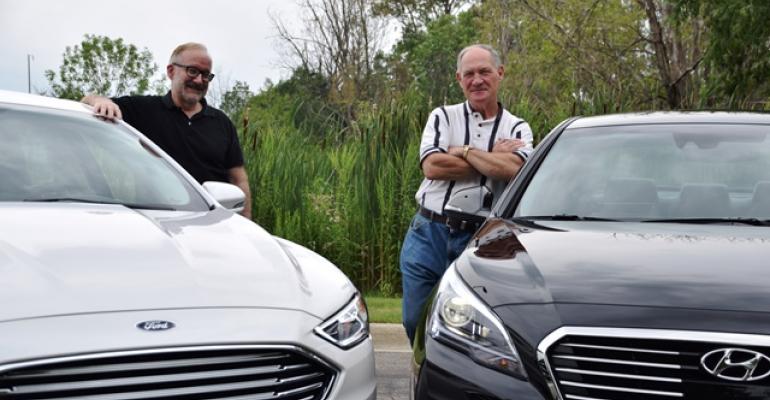 The Road to MBS: Plug-Ins Good for Long Hauls and Commuting

The Hyundai Sonata and Ford Fusion Energi PHEVs are roomy and comfortable 5-passenger sedans with a powerful value proposition that combines practicality, economy and environmental friendliness.

TRAVERSE CITY, MI – The last few years have not been good for hybrid-electric vehicles. Low gas prices, improving conventional gasoline engines and expiration of coveted high-occupancy lane privileges in California have even the segment-dominating Toyota Prius looking like its best days are past.

But there is one bright spot in the tiny alternative-powertrain segment: plug-in hybrids. Sales are up more than 55% through June, and key players such as the Chevy Volt and Ford Fusion Energi are up 74.5% and 68.6%, respectively, in the first half, according to WardsAuto data.

What’s more, some very good new models entered or re-entered the market during the past year, including plug-in versions of the BMW X5, Audi A3, Hyundai Sonata, Porsche Cayenne and Volvo XC90. A new plug-in version of the Prius also is due soon.

Our cynical side told us PHEV sales were growing because that was the only way buyers trading in hybrids could keep driving in less-crowded HOV lanes.

But Ford and Hyundai in particular tout the long-range capabilities and “no compromise” nature of their cars, so WardsAuto decided to take well-equipped PHEV versions of the Fusion and Sonata on a 250-mile (402-km) test drive from Metro Detroit to Traverse City featuring mostly high-speed expressway driving and 2-lane country roads with very little stop-and-go city driving.

The PHEV range issue is crucially important to automakers, because they say most consumers, even well-informed ones, do not understand the concept of a vehicle being able to drive in all-electric mode for a while and then switching to gasoline power when the battery is drained.

“There’s a very limited understanding, even among people who are relatively sophisticated about vehicles, about what a plug-in hybrid really is,” says Chris Hosford, chief spokesman for Hyundai Motor America.

“Time and again we see people say, ‘I don’t want a plug-in hybrid. I don’t want to have to run my car on batteries all the time.’ They clearly miss the point.”

Hyundai executives believe once people understand a PHEV’s capabilities, they will find the technology preferable to conventional hybrids. In fact, the Sonata PHEV is priced so salespeople can try to move Sonata hybrid intenders into the PHEV. Including government incentives, the Sonata PHEV actually is slightly less expensive than the HEV, Hosford told us earlier this year.

“We want to shift people over to plug-in hybrids, because we think it will be a much more satisfying experience for them,” he says.

Ford hopes educating consumers about the Energi’s long range will help clear up some of the confusion, but the company says big advertising campaigns don’t work in this case. Instead, they are hoping to reach potential buyers through word-of-mouth and social media.

Ford sells six electrified vehicles and plans to invest $4.5 billion to add 13 more by 2020 when about 40% of its global portfolio will be electrified. Hyundai has huge plans as well.

With this mission in mind, my colleague Steve Finlay and I hit the highway Sunday from Metro Detroit. Steve drove a top-of-the-line ’16 Sonata Limited edition PHEV priced at almost $40,000 prior to a boatload of U.S. government-funded incentives (more on this later), and I drove a ’17 Fusion Energi Titanium stickering at $37,890 after a $2,000 Ford discount; its base price is $34,120 prior to incentives. Titanium is one notch below Ford’s top-level Platinum version, which starts at $41,000.

The Sonata PHEV won a 2016 Wards 10 Best Engines trophy, and the Fusion Energi will be a nominee for the 2017 competition.

While both cars are PHEVs, they do have significant differences. The Ford is a bit smaller all around and has a smaller battery, which makes it less expensive. The larger battery in the Hyundai adds weight, but it also gives it a longer EV range of 27 miles (43 km).

To make sure it could be priced attractively, Hyundai engineers squeezed the biggest battery in the segment into the car, which allows it to qualify for the maximum $4,919 federal tax credit. That incentive makes it more affordable than many conventional HEVs with fewer features. The base Sonata plug-in starts at $34,600. But when the federal tax incentive is factored in, it’s less than $30,000, Hyundai officials say.

Also, the Sonata uses a 6-speed step transmission instead of a CVT to transmit power to the wheels and an electric motor in place of a torque converter. This is not a new strategy for Hyundai, but it is different from most other affordable PHEVs, such as the Fusion Energi. One of the biggest benefits of the step transmission is its familiar sound and feel relative to a shiftless CVT.

Both cars drive very much like dedicated EVs when under battery power. They are very quiet and have lots of low-end torque. The Fusion seamlessly – and barely noticeably – transitioned to gasoline power after 20 miles (32 km) on the freeway; the Sonata lasted a few miles longer.

While that doesn’t sound very far, my commute is typically 23 miles (37 km) each way. If I plugged in at work and at home, I’d fill up the gas tank monthly instead of weekly. Finlay lives close to work. He’d probably never have to pump gas again.

But more importantly for this test, once the juice officially ran out, neither of us noticed much of a change. Cruising at 70 mph to 80 mph (113-129 km/h) the engines make a barely audible hum unless they are taxed by hard acceleration or climbing fairly steep hills. Then they do get a bit loud and a tad thrashy.

The Hyundai is rated at 40 mpg (5.9 L/100 km) combined in HEV mode. Even though he wasn’t working that hard to drive efficiently, Finlay achieved 51.9 mpg (4.5L/100 km) after 234 miles (374 km), according to the trip computer. His route took him through one or two small towns (and several more stoplights) than me, which no doubt helped his numbers.

Finlay says the “driving style” instrument-panel readout was in “economical” mode 68% of the time, normal 28% and aggressive 4%.

“Part of the latter had to be when I passed a guy driving a beat-up, rusted-out Jeep with a precariously secured canoe on the roof. His left hand was out the window and holding on to the boat, presumably to prevent it from going airborne. It’s an Up-North-Michigan thing, and it’s better to be in front than behind.”

After spending much of the day driving, we ended up liking these cars a lot. Both are roomy and comfortable 5-passenger sedans with a powerful value proposition that combines practicality, economy and environmental friendliness.

There is just one big problem: Even though their batteries are not that big compared with pure EVs, they eat up a huge amount of trunk space in both cars. What’s more, the Hyundai’s rear seats do not fold down and have no pass-through capabilities. The Fusion’s seats do fold down, but there is only a slot wide enough to accommodate skis, fishing poles or a short 2x4, nothing much bigger.

In a world where consumers are in love with the cargo capacity of CUVs, that’s one big hurdle for these cars.

But then there are the perks for PHEVs. Besides the big tax incentives and access to HOV lanes, many places have primo parking spots reserved for charging electric vehicles.

I’ve been coming to the Management Briefing Seminars at the Grand Traverse Resort for more than 30 years, and every year I’ve struggled to find a halfway decent parking spot.