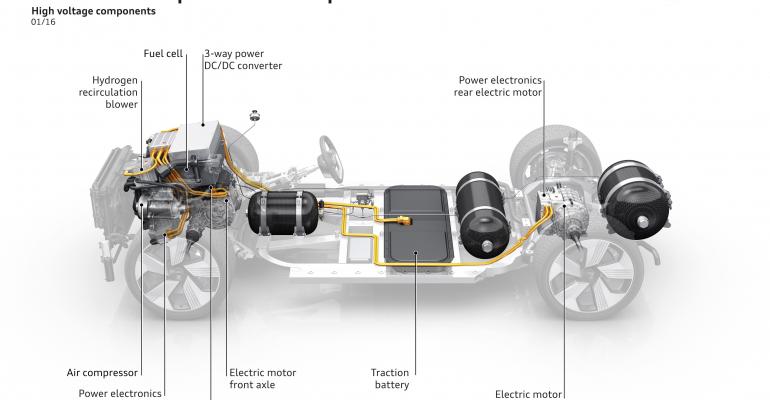 Buses are what&rsquo;s really driving the market today, but declining costs have automakers dabbling in FCVs &ndash; and calling on the developer synonymous with the technology &ndash; once again.

The Canadian company almost singlehandedly led the charge on fuel-cell-vehicle development in the late 1990s, then retreated from the sector when automakers put the brakes on production programs and placed their near-term bets on battery-electric vehicles instead.

But interest in FCVs is perking up again, fueled in part by the declining cost of fuel cells, the limitations of battery power and a desire by automakers to have every technological base covered in the run-up to 54.5 mpg (4.3 L/100 km) CAFE targets for 2025 – and even more importantly meet California’s zero-emissions-vehicle requirements.

Toyota and Hyundai already offer FCVs in limited volumes in some U.S. markets (soon to be joined by Honda), and several other automakers now have FCV development programs – if not firm production plans – under way.

And that has put Ballard back in the light-vehicle game.

“(FCVs) are still a number of years away from full commercialization, but because of a vast improvement in cost reduction, a vast improvement in reliability and durability, there’s increasingly a proposition for fuel-cell-powered cars,” Ballard Power Systems Chief Financial Officer Tony Guglielmin tells WardsAuto in a phone interview from the company’s headquarters just outside Vancouver, BC.

“There are several automotive companies today that have fuel-cell programs at various stages, some further (along) than others.”

Ballard’s Guy McAree, director-investor relations, says the renewed interest comes in part from an industry once again wanting to hedge its bets.

“Most major automotive OEMs want to make sure they’re keeping a toe in all the clean-energy options and (are) prepared, based on consumer acceptance, to go whichever way makes sense,” he says.

The industry’s late-2000s pullback on FCV programs nearly spelled the end of Ballard, but this time around the developer appears better grounded and likely to remain firmly planted whichever way the light-vehicle pendulum swings.

The company was founded in 1979 by Geoffrey Ballard, whose father had worked on the U.S. government’s Manhattan Project to develop the atomic bomb during World War II. Initially its focus was on lithium-ion battery technology, but the company seemed to come out of nowhere in 1987 when, employing new materials and techniques, it created a fuel cell with quadruple the energy density seen previously.

Industry interest climbed steadily, as did Ballard’s stock price, and by the early 1990s many major automakers had started dabbling in fuel cells. Regulatory agencies began discussing new standards around crashworthiness and refueling safety and there was talk of government-funded, space-mission-like programs to transform the world’s vehicle fleet to fuel-cell power.

Germany’s Daimler, which had an advanced FCV program of its own under way, moved quickly to scoop up a stake in the developer and tap into its patents and expertise. Ford also became interested in the Canadian firm, and in 1999 it joined with then-DaimlerChrysler and Ballard in a three-way partnership called the Automotive Fuel Cell Cooperation aimed at getting FCVs in the hands of consumers.

But FCVs continued to be tomorrow’s technology, and when government-incentive dollars shifted to batteries and the looming recession forced automakers to narrow their focus to the essentials, production programs largely went on the back burner, forcing a reeling Ballard to re-evaluate its business strategy.

“For a couple of reasons, in 2007-2008, that (equity) relationship (with Daimler and Ford) came to an end,” Guglielmin notes. “Strategically, Ballard made a decision that it needed to expand its focus beyond pure fuel-cell automotive, largely because…the automotive fuel-cell industry was always just around the corner.

“Ballard had a fairly significant cash burn, and the realization by the board was we needed to expand and focus on nearer-term commercial opportunities in fuel cells to try to move the company closer to profitability – or at least on the path of profitability.”

Since then, Ballard has found its surest traction in the bus market, where costs continue to shrink and manufacturers finally appear on the verge of higher-volume programs.

Earlier this year, Ballard signed a licensing deal with Guangdong Nation Synergy Hydrogen Power Technology worth $168 million, the largest fuel-cell transaction in the developer’s history. It will result in production of more than 300 fuel-cell buses in China between now and 2021.

That deal was followed by a $28.3 million equity investment in Ballard from Zhongshan Broad-Ocean Motor, a China-based maker of motors for fuel-cell buses and other electric vehicles.

Only about 150 fuel-cell buses have been put on the road worldwide to date, McAree notes. “So that signifies we see a change in the landscape happening, where fuel-cell buses are going to start to grow into more significant volumes pretty quickly.”

The cost of a Ballard fuel cell has plunged 60% in the past six years and the price of a fuel-cell bus overall has been cut in half, according to McAree.

And though China appears to be leading the charge, Ballard says interest is trending upward in Europe as well.

“We just bid on a program that’s 144 buses in Europe…for delivery in 2018-2019,” Guglielmin says. “Although the numbers aren’t as big as in China, there’s some evidence we’re going to be moving (in Europe) from small demonstration fleets to modest commercial fleets and buses.”

The decade-ago shift away from light-vehicle work was a sound business decision at the time – 60% of revenue now comes from the commercial-products sector outside automotive. But it also was a requirement of a 2007 unwinding of Ballard’s collaboration with Daimler and Ford.

That 5-year, non-compete provision ended four years ago, and “since late 2012, we have again started to participate in a very direct and material way in the automotive fuel-cell space, but not at the exclusion of all other markets,” Guglielmin says. “That’s really how we evolved out of the Daimler relationship – we got into some other product application areas and now, in the last three to four years, have re-emerged and stepped back into being a major player in automotive.”

The big move came in 2014, when Ballard purchased the fuel-cell operations of United Technologies. A year later it sold key UT patents to Volkswagen/Audi for $80 million and an extension of an engineering-services contract between the two that now runs to 2019.

“We’re doing about $15 million-$20 million a year with the Volkswagen/Audi Group in automotive,” Guglielmin notes. “But it’s a non-exclusive relationship, and we do continue to work with a number of other automotive companies (including Daimler) in a variety of engineering services programs, much smaller than Volkswagen.”

Ballard continues to lose money – it was $16.4 million in the red in first-half 2016, but Wall Street lately has been more bullish about the firm. Zacks Equity Research typified the mood this month, telling technology investors “it may be time to consider (Ballard) for your portfolio.”

Most of that enthusiasm likely is a result of the improving business model around the bus market. But some of that investor interest could be an acknowledgment of the fuel cell’s re-emergence as a future player in the electrical-vehicle sector and Ballard’s potential role in it.

“(The period) from 2000 to 2010 was somewhat the lost decade, where battery-electric cars came out at price points that made a lot of sense and fuel-cell cars would have been completely non-competitive,” Guglielmin says.

But the script is beginning to flip ever so slightly, with costs coming down and the limitations of batteries tempering market expectations for EVs.

“Fuel-cell cars can run as far as a tank of fuel, so you don’t have to deal with range anxiety – and the (refueling) time is a matter of minutes, not 15 minutes or a half an hour or overnight,” Guglielmin says of the potential advantage over pure electrics.

McAree sums it up: “Battery-electric cars require a change in consumer behavior, and that’s the biggest obstacle.”

Even so, the two executives agree it will be some time before automotive begins to see the type of fuel-cell progress occurring in the bus sector today.

And, lesson learned, Ballard appears less likely to put all its chips on the light-vehicle market again.