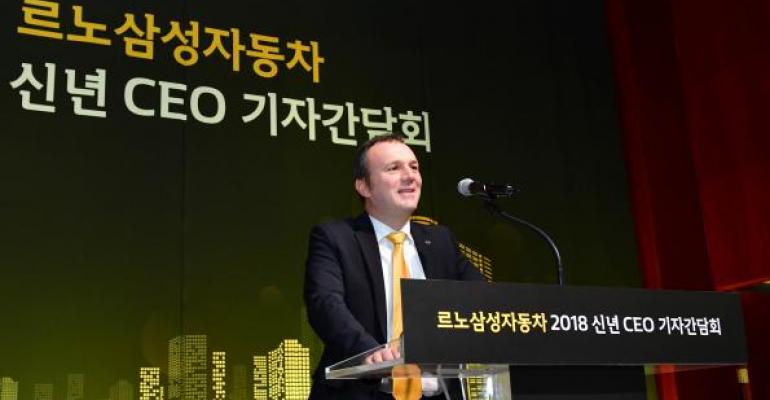 A spokesman declines to identify the electric van but says there are several options, including importing it from Europe and producing it locally at the company&rsquo;s Busan plant. He says Renault Samsung hopes to launch the van by year-end.

An RSM spokesman confirms the Clio hatch will go on sale in May, with a modest target for at “above 5,000 units.”

The spokesman declines to identify the EV van but says several options are in place, including importing it from Europe or producing it locally at the company’s Busan plant. He says RSM hopes to launch the van by year-end.

Signora says with the electric van, RSM is “throwing down the gauntlet” to challenge both Hyundai and Kia in that niche commercial-vehicle market.

The Kangoo Z.E., if that is the confirmed vehicle, is produced in three versions: the standard model, a Maxi Van version and a Crewcab Kangoo Z.E. 33. All three are powered by the same lithium-ion battery pack, which can deliver a range of 124 miles (200 km) in summer and 75 miles (121 km) in winter on a single charge. In Europe, customers buy the vehicle but lease the battery pack.

Signora says the Korean launch of the Clio hatch trails its debut at last April’s Seoul auto show by a full year because it was highly popular in European markets and it was all Renault’s European plants could do to keep up with soaring regional demand until now.

Shortly after joining RSM in November, Signora identified some of the general goals he was setting. He said the automaker would lead the industry in quality and would rank third in domestic sales, ahead of Ssangyong and GM Korea, which in 2017 ranked fourth and third, respectively, behind Kia and Hyundai.

Signora had served with RCI and its predecessor since 1991. He served as CEO of RCI Korea from 2006 to 2010. He also has held key posts with RCI in Brazil, Japan, Mexico and Thailand.