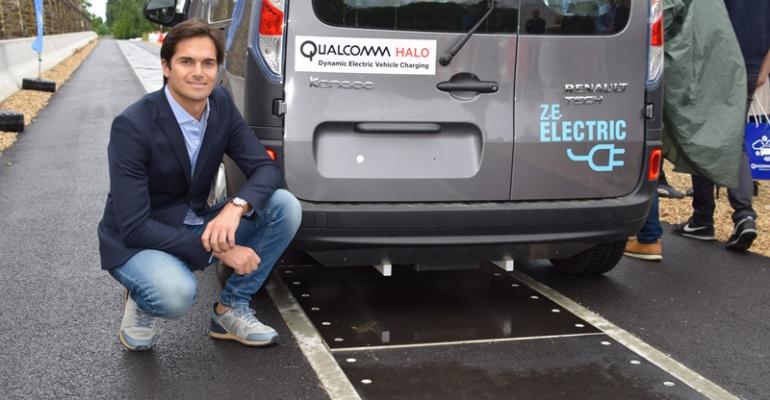 Qualcomm Gets EV Charging Off the Ground

Asphalt at a French military outpost has been inlaid with 328 ft. of inductive chargers that project energy only when a vehicle passes over with plates designed to receive an electromagnetic pulse of up to 20 kW. The vehicle converts it to electricity.

PARIS – Range anxiety, a significant impediment to future sales growth of electric vehicles, could become a thing of the past if American supplier Qualcomm succeeds with an ambitious technology that enables cordless charging of electric vehicles while rolling down the road.

Better known in the telecommunication industry, Qualcomm is reaching deeper into automotive with technologies enabling connected vehicles and next-generation infotainment, as well as wireless charging of EVs by way of electromagnetic induction.

That technology, marketed as Qualcomm Halo, allows energy to be transferred from induction coils in a plate on the ground to a receiver plate on the underside of an electric vehicle. The car merely has to be parked over the plate for charging to commence, without the driver having to physically plug in.

Lots of companies are pursuing this stationary inductive charging, and a Mercedes-Benz sedan is expected to be one of the first production vehicles capable of wireless energy transfer, using Qualcomm Halo knowhow.

But the supplier is looking farther down the road to a revolutionary extension of the technology that will require cooperation of federal and local governments, road builders, road commissions, automakers and suppliers, as well as consumers, who could pay for the convenience in many ways.

The concept of an EV receiving energy at the same time it is consuming it, while traveling at speeds up to 75 mph (120 km/h) seems far-fetched. But it works, as demonstrated near Versailles at a French military camp used for armament testing.

Here, a strip of asphalt has been inlaid with 328 ft. (100 m) of inductive chargers that project energy only when a vehicle passes over with plates designed to receive an electromagnetic pulse of up to 20 kW. The vehicle then converts it to electricity for driving the wheels or for storage in the battery. Power to the base pad turns on and off in 50 milliseconds when a vehicle passes overhead. The system operates at a frequency of 85 kHz.

In the testing strip, the plates are visible and flush with the road surface. But in practical application, the plates will be up to 6 ins. (152 mm) below the surface and still be capable of transferring energy. Two vehicles on the same enabled roadway can charge dynamically at the same time. Rain, ice, snow and even roadkill will not block the transmission of power.

“When I took over this business a couple years ago, most people didn’t believe you could actually charge a car at high power over a big air gap and do it efficiently,” Steve Pazol, Qualcomm’s vice president and general manager-wireless charging, tells journalists before the demonstration. “But we felt we needed to push the limit. This company is a risk-taker.”

Electrifying roads, highways and residential streets makes sense not only to spur EV sales but also as part of the migration to autonomous mobility, Pazol says.

“Autonomous vehicles can’t plug themselves in, so what will happen? The use model of automobiles will change rapidly,” he says. “Lots of vehicles will be shared-use, and they won’t have a lot of downtime and won’t be able to stop for long periods of time to charge. We think wireless charging and dynamic charging will be a key piece of that.”

Qualcomm claims to be first in the world to demonstrate dynamic charging, and several partners are participating in the trials.

An important player is VEDECOM, an Institute for Energy Transition created in 2014 by the French government to pursue carbon-free and sustainable mobility. VEDECOM built the Versailles FABRIC test track (mostly funded by the European Commission at a cost of €9 million [$10.1 million]) with Qualcomm Halo technology while the receiving pads were installed on the underbody of two Renault Kangoo vans.

Integrating dynamic charging within existing roads and maximizing its potential raises a flood of challenges and questions, and devising a pricing model acceptable to consumers is one of the most daunting.

“For me, the goal is, as we discuss this with the Qualcomm team, to get the full system onboard and offboard with a 3-digit and not a 4-digit cost (increase),” Feunteun says. “That’s the tipping point for us.”

However, the impact on vehicle purchase price is merely one aspect: How much more will it cost consumers in tax dollars to have dynamic charging pads installed in roadways? Will governments wanting dynamic roads clash with taxpayers who oppose such projects? How will consumers pay for electricity transmitted from equipped roads, and how much will it cost?

“We want to bring it at a reasonable price,” Feunteun says. “A key question now at Renault is a reduction of cost to the technology.”

On the upside, consumers who have inductive charging plates installed in their garages would not have to fiddle with cords and plugs every day, and vehicle batteries could be substantially smaller if the public infrastructure develops to the point that vehicles are charging multiple times throughout the day, either in parking lots or on dynamic roads.

Expanding the charging infrastructure is essential to the growth and mainstream adoption of EVs. Based in the U.K., Chargemaster has installed 30,000 Level II charging stations across Europe, says David Martell, Chargemaster chief executive.

“Six or seven years ago, people didn’t think EVs were coming along,” Martell says. “Now, virtually every car manufacturer in the world is into production of electric cars. We see wireless charging as the next milestone for that evolution because one of the issues that hinders people from adopting electric cars is the simple act of plugging it in.”

Within the next month, Martell says the U.K. will have 100,000 EVs on the road, “and it won’t be long before a million EVs are across Europe.”

Many major cities are pushing for zero-emission vehicles to improve air quality and reduce congestion, and London is requiring all black cabs beginning in January to be zero-emission capable, with a range-extending gasoline engine to be used when necessary, he says, adding that wireless charging of electric cabs makes sense, both dynamically and when parked.

Highways England, which oversees roads in the U.K., has commissioned a feasibility study into the installation of dynamic wireless charging on some major highways there, Martell says.

Wiring multi-lane highways for dynamic charging would be enormously expensive and may have other unintended consequences. With Halo, a vehicle can charge only in a wired lane, which means EV drivers might cause traffic backups to occupy that lane. Perhaps drivers of internal-combustion vehicles will be discouraged from using those lanes.

Based on early research, Renault’s Feunteun says one-fourth of roads in an urban or suburban area would need dynamic charging capability to meet a community’s needs.

To simplify construction, Qualcomm says the base charging coil can be surrounded in a concrete block that can be lowered into position during road construction.

Qualcomm says some tests of the dynamic system have achieved charging efficiency of 80%, while a Level II plug-in charger is about 95% efficient.

The recent technology demonstration here aligned with central Paris hosting the Formula E race of open-wheel electric vehicles this past weekend. Qualcomm Halo is used for stationary inductive charging of two BMW i8 safety cars and two BMW i3 medical cars for the race series, now in its third year.

The race through the narrow streets of Paris totaled 49 laps, and each team swaps into a fresh car midway through. Renault’s Sebastien Buemi took the checkered flag with an average speed of 94.6 km/h (58.8 mph).

Race organizers are considering ways to integrate dynamic or stationary charging into the race series, which comes to Brooklyn, NY, on July 16.