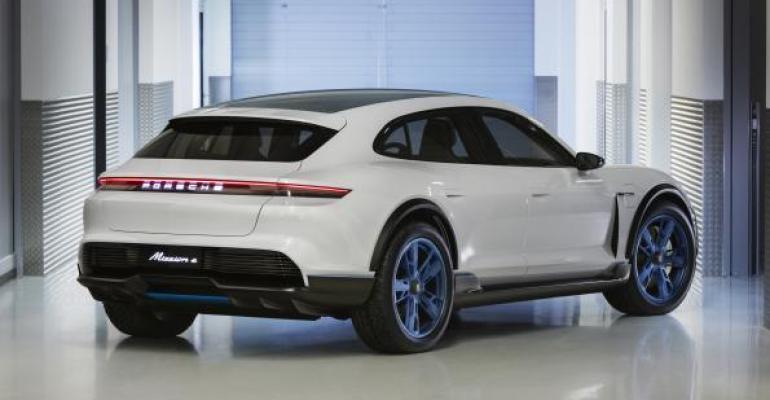 <p><strong>Porsche Chairman Oliver Blume describes the Mission E Cross Turismo concept as a feasibility study created by a team of designers and engineers to assess whether a market exists for such an outwardly sporting zero-emission utility vehicle.</strong></p>

GENEVA – Porsche pulls one of the biggest surprises at the 2018 Geneva auto show with the unveiling of a new 590-hp electric-powered CUV based on its upcoming Mission E sedan.

Porsche Chairman Oliver Blume describes the Mission E Cross Turismo concept as a feasibility study created by a team of designers and engineers to examine if a market exists for such an outwardly sporting zero-emission utility vehicle.

Unofficially it is a rolling blueprint for Porsche’s second EV, which is set to follow the production version of next year’s Mission E 4-door sedan to showrooms in 2021 with the sort of performance that Blume suggests will not disappoint.

“The Mission E Cross Turismo is an expression of how we envision the all-electric future,” Blume says. “It combines sportiness and everyday practicality in a unique style. It will be fast to drive, but also quick to recharge and able to replicate its performance time after time.”

Powered by two permanent-magnet synchronous electric motors, one mounted up front and another at the rear, the all-wheel-drive Mission E Cross Turismo is claimed to boast a combined 590 hp. That’s 76 hp more than the facelifted version of the Porsche 911 GT3 RS also making its public debut at the Geneva show.

Porsche says the power characteristics of the two electric motors provide a level of continuous power “that is unmatched by any other electric vehicle” on sale today.

The new Porsche is engineered with the same 800V charging system as the Mission E sedan with an 80% recharge claimed to be possible in less than 15 minutes.

Porsche says the 800V system, which is set to be a feature of all future Porsche EVs, provides a 62-mile range on a 4-minute charge. Although unconfirmed, the new CUV’s total range is expected to be similar to that of the Mission E sedan at about 310 miles (499 km).

The Mission E Cross Turismo also can be charged inductively.

Stylistically, the second of Porsche’s EVs adopts the smooth body surfacing of the Mission E sedan together with characteristic off-road cues such as wheel-arch cladding and underbody protection.

Inside, it previews a new curved touchscreen display coupled to an eye-tracking control system used to operate its infotainment system.

Reiterating Blume’s comments that the Mission E Cross Turismo was created as a feasibility study, Mauer adds it will be useful “to find out if this car has future potential.”