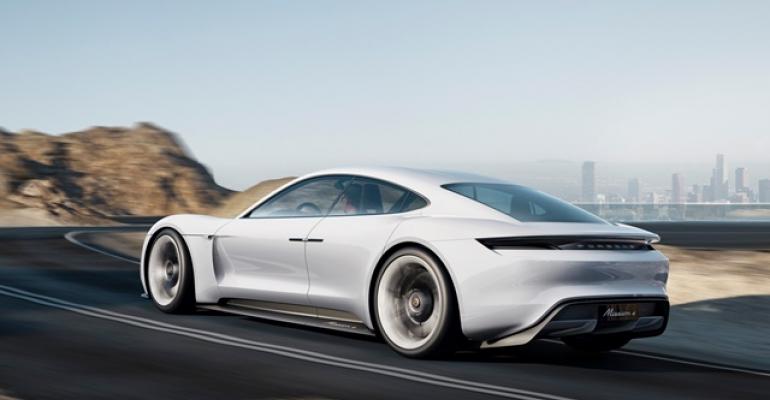 The upcoming Porsche Mission E will be sold in a number of model variants with differing power outputs in a move mirroring that of the German automaker’s approach to traditional internal-combustion technology, Chairman Oliver Blume reveals.

Set to become the first fully electric-powered Porsche production model when it goes on sale near the end of 2019, the new 4-seater also will feature state-of-the-art electronics permitting over-the-air updates to key systems such as the driveline and autonomous-driving functions.

Blume confirms the Mission E sedan will be priced to compete in a segment below the Panamera. In North America, the recently launched second-generation Panamera costs $85,000 for a 325-hp turbocharged V-6 base model, rising to $194,800 for the range-topping 670-hp long wheelbase Turbo S E-Hybrid.

Blume further affirms earlier some specifications of the Mission E’s lithium-ion battery, saying it will offer a 311-mile (500-km) range and take 15 minutes to charge. Previously released performance specifications call for a 0-62 mph (100 km/h) sprint in less than 3.5 seconds.

But the big news arguably is the automaker’s plans for a range of Mission E models, an approach the automaker takes with its 718 Boxster/Cayman, 911, Panamera, Macan and Cayenne line-ups. The strategy serves as evidence the Mission E is no science experiment, but rather a firm commitment to an electrified future for Porsche.

“We’re thinking of different options,” he tells WardsAuto during an interview at the recent Geneva auto show. “There will be more than one model, with different levels of power.”

Blume also reveals Porsche’s work on outfitting the Mission E with software to allow over-the-air updates, a process similar to that pioneered by Tesla with the Model S.

Unveiled as a concept at the 2015 Frankfurt auto show, the first road-going prototypes of the Mission E are under construction at Porsche’s Weissach, Germany-based R&D center near its Stuttgart headquarters. According to Blume, testing this summer kicks off a planned 2-year development phase for the car.

The Mission E sits on one of three new electric-car platforms being developed within Porsche parent company Volkswagen Group. However, the so-called J1 structure is described as different from the C-BEV platform planned to underpin sister company Audi’s forthcoming production version of the previously disclosed e-tron quattro.

“The J1 has a low floor, while the C-BEV is constructed differently with a higher floor that suits an SUV,” says Blume.

Despite the differences, the Porsche chairman confirms the production versions of the Porsche Mission E and Audi e-tron quattro will feature similar Li-ion battery technology.

Also under development at Volkswagen is the so-called MEB electric platform, which is planned to underpin a production version of the I.D. hatchback.

Details remain scarce, although Porsche is rumoured to be working with Japanese electronics specialist Hitachi on the new system, which Blume describes as the key to providing the batteries of the production version of the Mission E with an 80% charge in 15 minutes.

“There are situations in traffic jams where you will be able to read a newspaper, but our customers take pleasure from driving and this will remain,” he says.