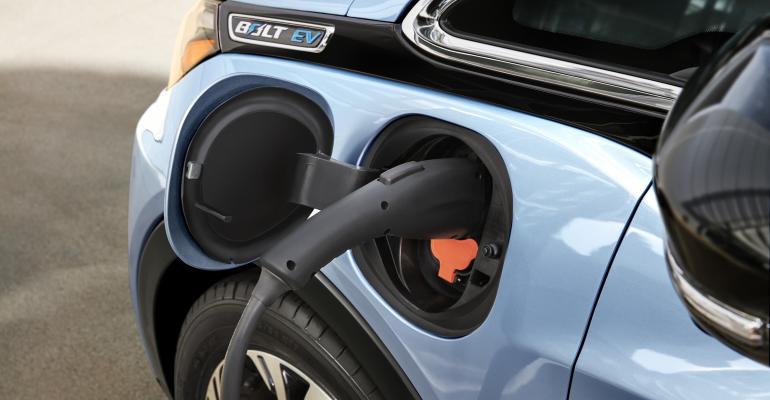 TRAVERSE CITY, MI – Berlin-based CharIN e.V., a consortium of automakers and suppliers hoping to establish a Combined Charging System as a global standard for battery-electric vehicles, expands to the U.S. under the stewardship of engineering services and consulting group P3 North America.

The CCS inlet- and connector-combination accommodates EV charging with an alternating current at a maximum of 43 kW and the option for direct-current changing at a maximum of 200 kW. CharIN expects to reach 300-kW DC charging in the future. Until very recently, nearly all EV charging ports and connectors in the U.S. have been AC, utilizing a single 5-pin plug under the J1772 standard from the Society of Automotive Engineers.

Adding the 2-pin DC option to a charge inlet and connector means plug-in owners would not be tethered solely to AC-charging, which can take 8-10 hours to regain full battery capacity. They also could tap into a DC quick-charge post to refill the battery of a limited-range EV in less than 30 minutes.

“For highway situations, the time to refill the battery would be much shorter, while at home you can do continuous charging,” says P3 North America President and CEO Samit Ghosh. “That is the interest in CCS.”

CharIN members, who include OEM heavyweights such as Daimler, Ford, General Motors and Volkswagen, as well as Tesla, Faraday Future and companies outside of automotive, think adopting a CCS standard globally would help spur sales of EVs. A broader penetration of EVs would drive down cost of the products and slash carbon-dioxide emissions.

Like many other new technologies over the course of history, EVs are struggling to adopt common standards. It not only holds up their rollout, experts say, but different inlet and plug standards make it difficult for automakers to homologate a single product for multiple regions of the world.

“It’s always been said, ‘We can standardize as long as you take my technology,’” Ghosh tells WardsAuto on the sidelines of a recent industry conference here. “All the different types of plugs…it’s just a mess.”

In addition to the J1772 standard from SAE, which also supports CCS adoption with a combo standard, a CHAdeMO high-voltage DC charging standard exists. Japan appears firm in its adoption of CHAdeMO with broad use of it on Toyota, Nissan and Mitsubishi products. China backs a design with AC and DC inlets side-by-side. Tesla utilizes a unique design. The CCS design stacks AC on top of DC and is employed by Chevrolet and BMW, among others.

There are approximately 1,500 CHAdeMO DC quick-charge points in the U.S., and less than 375 CCS posts. However, CCS charging units are considered less expensive than CHAdeMO and they provide a higher rate of charge.

“I do not see CHAdeMO prevailing” as a global charging standard, Ghosh says.

Consultant IHS predicts a future split in global penetration between the CHAdeMO and CCS, as deployment of the latter picks up speed in the coming years.

CCS was introduced in Germany three years ago to support EV testing by VW and BMW and 2,371 posts exist in Europe today.

Ghosh says CharIN offices in Detroit and Newport Beach, CA, hosted its first working groups this week to promote CCS as the future universal, open standard for all EVs worldwide. CharIN also will work to grow its membership to include more non-automotive players in the U.S., such as electric utilities.

Backed by its technology expertise, P3 will facilitate conversation among group members, he says. But the project is not revenue-driven.

“It is right in our sweet spot and gives us the opportunity to work very closely with the automakers and create trust and relationships,” Ghosh says. “Every touch point is positive and helps grow our company.”