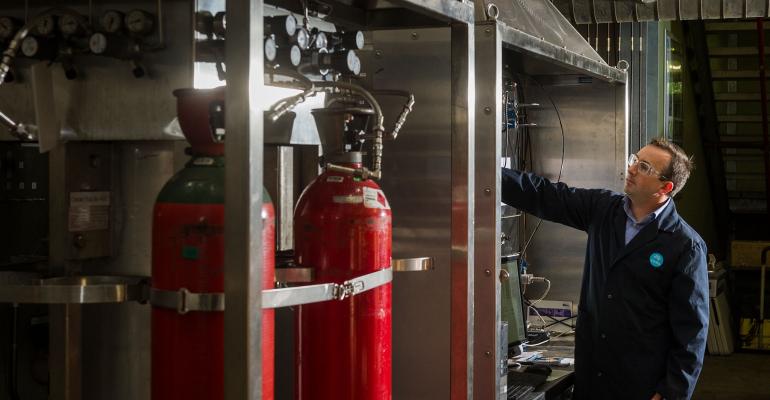 The Commonwealth Scientific and Industrial Organization&rsquo;s membrane-reactor technology will fill the gap between hydrogen production, distribution and delivery in the form of a module that can be used at or near a refueling station.

The 2-year project will build on the Commonwealth Scientific and Industrial Research Organization’s expertise in separating pure hydrogen from mixed gas streams, in this case converting ammonia to high-purity hydrogen for use in HFCVs.

The organization’s membrane-reactor technology will fill the gap between hydrogen production, distribution and delivery in the form of a modular unit that can be used at or near a refueling station.

The project received A$1.7 million ($1.3 million) from the Australian Science and Industry Endowment Fund, which will be matched by the CSIRO.

The transportation and storage of hydrogen now are complex and relatively expensive, making export commercially challenging.

The goal of the project is to allow hydrogen to be transported in the form of ammonia – which already is being traded globally – and then converted back to hydrogen at the point of use. The thin metal membrane allows hydrogen to pass, while blocking all other gases.

In the final stages of development, the membrane device is being further refined for commercial deployment.

Recent advances in solar and electrochemical technologies mean renewable hydrogen production is expected to become competitive with fossil fuel-based production, providing an opportunity to decarbonize both the energy and transport sectors while creating new export opportunities.

While Australia is a relatively small hydrogen market, the fuel can be distributed to emerging markets in Japan, South Korea and Europe using existing infrastructure.

CSIRO CEO Larry Marshall sees the prospect of a growing global market for clean hydrogen, and the potential for a national renewable hydrogen-export industry, benefiting Australia.

“This is a watershed moment for energy, and we look forward to applying CSIRO innovation to enable this exciting renewably sourced fuel and energy-storage medium a smoother path to market,” Marshall says in a statement.

Renewable Hydrogen plans to export hydrogen to Japan as ammonia and Chairman Brett Cooper believes CSIRO’s membrane technology will mean a new export product for Australia that could match the scale of the current liquefied-natural-gas industry.

“With this technology, we can now deliver our renewable energy to Japan, (South) Korea and across the Asia-Pacific region in liquid form, as renewable ammonia, and efficiently convert it back to pure hydrogen for cars, buses, power generation and industrial processes,” Cooper says.

This market didn’t exist 10 years ago and Cooper says Australia is positioned to be the No.1 renewable-fuel provider in the global economy’s fastest-growing region.

Bernie O’Connor, senior executive advisor to the board of Toyota Australia, says research into making hydrogen more accessible for fuel and energy storage is key to the success of the technology.