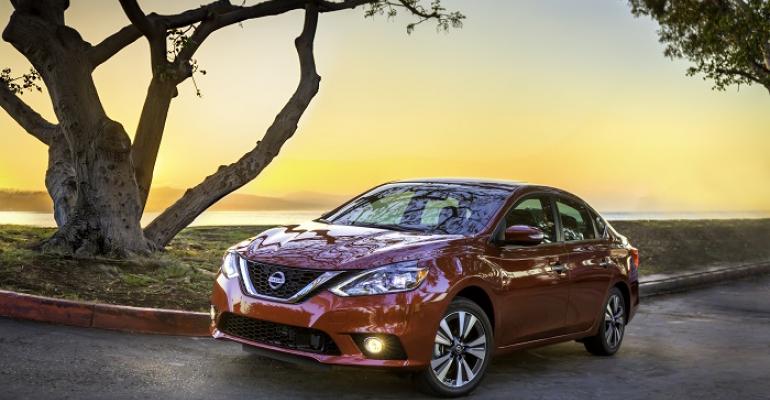 A choice of powertrains and different body styles would align Nissan more closely with other U.S. C-car competitors including Honda, Ford, Chevy, Hyundai, Kia and Subaru.

NEWPORT COAST, CA – Nissan says more engine offerings are due for its U.S. Sentra compact car in the future, while it also studies, after a 26-year absence, a hatchback version of its sedan-only C-car.

“From a product standpoint, in the future you’ll see more engine offerings, and it’s full steam ahead. We’re fully focused on the segment,” Michael Bunce, director-product planning for Nissan North America tells WardsAuto in a recent interview in Detroit.

Ford, Hyundai and Kia also offer more than one engine in their respective Focus, Elantra and Forte compact cars.

Meanwhile, another Nissan official says the brand is studying reviving a Sentra hatchback.

The first- and second-generation Sentra, in market in the U.S. from 1982-1990, were available in a 3-door hatchback body style, as well as a 5-door variant dubbed a wagon.

Reasons to revive a C-segment hatchback in the U.S. would be to offer consumers another choice and match the competitive set, Tony Baehner, senior manager of product planning-NNA, tells WardsAuto at a ’16 Sentra media preview here this week.

Reasons not to pursue the body style he says are the growing popularity of B- and C-segment CUVs, essentially hatchbacks with a taller ride height.

The C-segment hatchback segment in the U.S. also is dominated by two models: the Ford Focus and Mazda3 hatchbacks, which up to this point have made it hard for challengers to break into the sector. Baehner says this is reflected in the less-than-10% take rate of hatchback versions of other C-cars, including the Elantra and Forte.

A new player is coming in the form of the ’17 Chevrolet Cruze 5-door, introduced at the 2016 North American International Auto Show in Detroit this month and set to go on sale later this year in the U.S. Baehner says Nissan will monitor the Cruze’s sales in determining whether to pursue a Sentra hatch.

The Sentra’s platform mate, the Renault Megane, already is available overseas as a 5-door and is a possible guide for development of a Sentra hatch.

Nissan is trying to keep the seventh-gen Sentra’s momentum going in the U.S., via a refreshed ’16 sedan launched late last month with 550 changed components.

“The competition is so strong out there and it’s really up to the manufacturers to make sure we keep our products fresh,” Ken Kcomt, director of car product planning-NNA, says here of the refreshed Sentra, coming shortly after the debut of the new Civic sedan and at the same time as Hyundai’s next-gen ’17 Elantra.

Nissan says the Sentra’s modifications are about as extensive as the recent redo of the Altima midsize sedan. For the ’16 Altima, Nissan spent three times the amount it typically does on a mid-cycle update.

While WardsAuto’s Upper Small segment, where most U.S. compact cars live, saw growth last year, it wasn’t as steep as the increase in Small CUVs.

In the Detroit interview, Bunce says the growing draw of CUVs is “just going to make us up our game to protect and keep a relevant number of consumers still shopping” compact cars.

Updates to the Sentra for ’16 include the addition of Nissan’s boomerang headlights and taillights, more bolstered seats, a new 6-way power driver’s seat, higher-quality trim materials and the NissanConnect infotainment and telematics service.

Baehner says the new Sentra also is “the quietest we think we’ve ever put on the road,” thanks to the addition of an acoustic windshield, added dash and door insulation and retuned engine mountings.

Nissan is offering advanced safety technology for the first time on the Sentra.

Blindspot warning with rear-cross-traffic alert is standard on the SL grade or part of a Driver’s Assist package, priced at $1,020 on a Sentra SV here. Forward emergency braking and intelligent cruise control is part of a $1,230 technology package seen here on a Sentra SR.

For ’16, the Sentra is offered in S, SV, SR and SL grades, with the base grade still offering an optional manual transmission mated to the car’s 1.8L carryover engine. That car begins at $16,780, up slightly from the ’15 Sentra S grade’s $16,530 and not including $835 destination and handling fees.

The SV, SR and SL grades get the CVT.

Nissan touts the car’s “accessible technology,” noting the SV with the Driver’s Assist package can be had for $19,570, plus $835 destination and handling. Driver’s Assist also comes with navigation.

The car’s technology will be a key focal point of an upcoming spring advertising campaign.