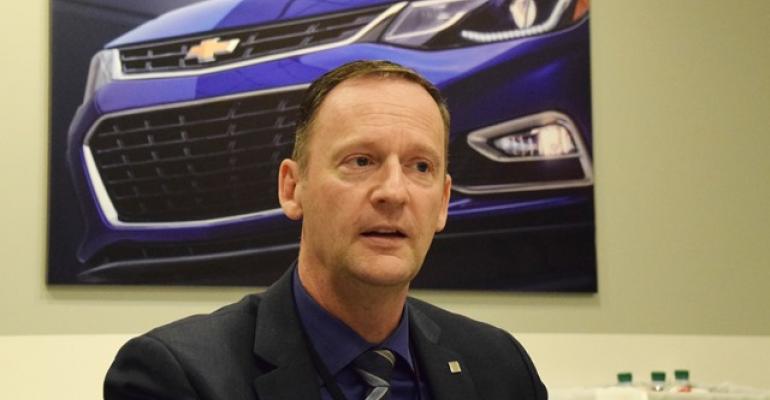 DETROIT – As the autonomous capabilities of vehicles continue to grow and the popularity of ride-hailing and car-sharing services widens, some long-standing vehicle attributes may take a back seat with consumers.

“We still have a value proposition in selling driving character,” Nicholson, the automaker’s global powertrain chief, tells WardsAuto in an interview wedged between GM’s announcement of a  significant investment in ride-hailer Lyft and the launch of its car-sharing unit Maven.

Lyft and Maven vault GM into the new mobility world, where 6 million people globally are choosing to rent their transportation by the hour rather than own and maintain vehicles for years at a time. GM thinks the popularity of the services will grow between four- and five-fold by the end of the decade.

Ford is of the same ilk, creating “Ford Pass” to keep up with changes in transportation preferences.

Meanwhile, autonomous-vehicle technology continues its aggressive rollout. Elements of the technology, such as autopilot in traffic jams and automated parking, already are appearing on many luxury vehicles. GM will roll out its first step in automated driving technology next year.

Fully autonomous vehicles are expected by 2025, the Boston Consulting Group predicts, and shared services programs launched by GM and Ford someday should converge with automation to create a day when a driverless car picks you up at your doorstep for a low, onetime fee.

However, the rise in new mobility modes brings into question the relevancy of long-standing car-buying motivators from eye-catching exterior styling to the rumble, or whisper, of what’s under the hood. In other words, why sweat the details when you’re not the one behind the wheel?

“I get that,” Nicholson replies to the question.

“However, the propulsion systems in these vehicles still have to comply with (regulations),” he adds. “And whoever does own those cars will have to care about (tailpipe emissions), fuel economy, electric charging power, or let’s call it refueling time, because they want to keep those cars out on the road.”

High utilization rates make shared transportation services profitable, so unreliable powertrains will not be able to handle the demanding duty cycles. Fleet owners want low fuel costs, too, so the powertrains of new mobility will have to be outfitted with the latest technologies such as lightweight materials, downsized-boosting, 8- and 9-speed transmissions and electrification.

Federal fuel-economy and emissions regulations also motivate automakers to put their best technology into shared transportation services, and every car in those fleets serves as a test drive for potential buyers.

In other words, it will not be a dumping ground for legacy products.

“You can’t drag something out from 20 years ago just because the person riding in the car doesn’t care,” says Nicholson, a 34-year GM veteran who was promoted to his current position from executive director-embedded controls at GM Powertrain in late 2014. He reports to Mark Reuss, head of GM product development.

Then there is the personal-use sector, which Nicholson does not see going away anytime soon, especially in the wide-open space of the U.S. Even with autonomous features, he thinks plenty of people still will want to be in the driver’s seat.

“You might be driving it just for the joy of driving,” he says.

“History is being made as we speak,” he says. “It is exciting to be part of that, and I feel like we are making a difference. I don’t expect it to be a settled issue in 10 years. I think the next 10 years will be full of exciting churn and change as we move forward.”

Despite recent breakthroughs in the range and cost of battery-powered vehicles – for example, the Chevy Bolt EV coming later this year will go 200 miles (322 km) on a single charge and cost about $30,000 after U.S. government rebates – Nicholson believes the future will contain a mix of cars propelled by traditional internal-combustion engines and fully electric ones.

But exactly how that mix might be distributed is an open question.

“We are making engines better than they’ve ever been, and we’ve got a bunch of people working hard on it both at General Motors and in the industry. To the extent that they are successful, and that battery storage remains fairly expensive, we’ll still see a lot of so-called conventional power cubes in the portfolio,” he says.

“But to the extent that we, and a bunch of other people, are working on getting battery costs down, to the extent they are successful probably tips it a bit the other way. It’s exciting to watch and be part of the story as it unfolds.”