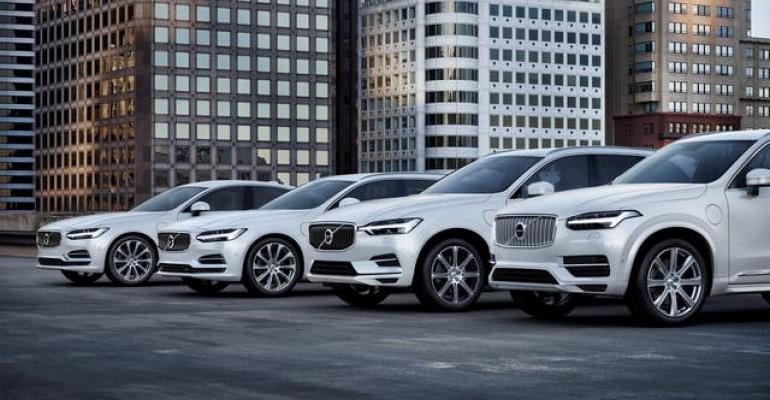 LONDON – Only four of 11 of the world’s top volume automakers will escape billions of dollars in fines for missing tightened European vehicle-emissions targets.

This is the projection being made by PA Consulting Group in considering which manufacturers are on course to meet the European Union 2021 emissions mandates.

The analytics firm claims only Volvo, Toyota, Renault-Nissan and Jaguar Land Rover will meet the new targets while Ford, BMW, Volkswagen, Fiat Chrysler, Hyundai-Kia and PSA Group (including Opel/Vauxhall) will miss their targets, although Daimler is getting closer.

PA’s annual forecast of automakers’ performance against mandatory EU carbon-dioxide emissions targets suggests the failing automakers face a huge challenge to reduce CO₂ emissions to meet the EU’s 2021 target. There have been numerous recent government announcements of plans to ban internal-combustion engines – as early as 2025 in Norway and the Netherlands, and by 2040 in the U.K. and France. A similar ban is on the agenda in Germany and China.

PA’s 2017 ranking analysis indicates most automakers will face penalties of €95 ($113) for every gram of CO₂ above the limit, multiplied by the number of cars they sell in 2020. At the current rate, VW would face the biggest fine of €1.7 billion ($2 billion), followed by FCA with €1.2 billion ($1.4 billion). The biggest fall from grace is PSA, which was on track to meet EU emissions targets but fell into the failing bracket following its takeover of Opel and Vauxhall.

At the other end of the scale, there have been some positive developments, with Volvo, Toyota, Renault-Nissan and JLR expected to meet the EU emissions targets.

There has been a huge change at the top of the table, with Volvo a new No.1, up from seventh last year. This is based on the Swedish automaker’s strategy to sell only all-electric or partially electrified cars from 2019 onwards, resulting in a huge improvement in CO₂ performance ahead of 2021.

Volvo tops the lowest-emissions table, followed by Toyota and then Renault-Nissan. JLR is hitting its 2021 target despite having considerably higher emissions than the 10 other ranked automakers, both now and four years from now.

Norway has the lowest level of emissions and the highest use of plug-in hybrids and electric vehicles, which made up 29% of new-car sales in 2016 there, reflecting its policy of banning the ICE by 2025.

In comparison, meeting the U.K.’s ambitions to ban combustion engines by 2040 will be a challenge with the nation appearing toward the bottom end of the scale of European countries. Developing alternatives lags other countries and experts believe it is not currently well placed to drive this shift to electric options, given it produces 2.5 million combustion engines a year, 15% of the European total.

Thomas Goettle, head of automotive-PA Consulting Group, says: “Carmakers across Europe need to make radical changes in order to meet the EU CO₂ emissions targets for 2021. Many of them need to focus now on developing new models that will appeal to the consumer and help them meet their targets. There is nothing less than a revolution facing the car industry, and those manufacturers who fail to keep up face potential fines in the billions.”