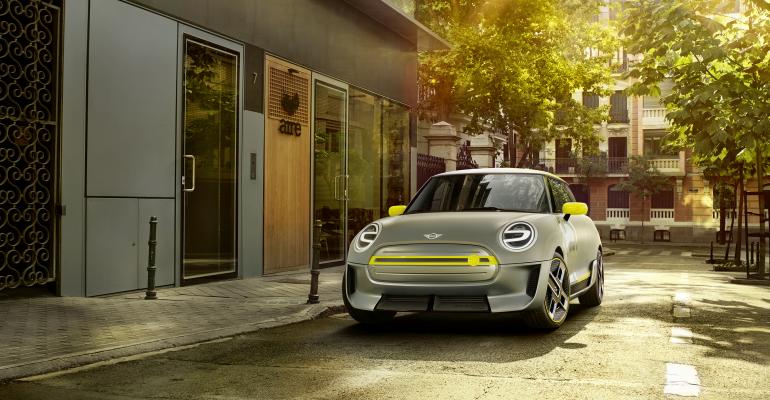 The concept combines many of the classic Mini design elements and proportions used by the third-generation Cooper, together with newly developed cues conceived around the 4-seater&rsquo;s electric driveline and optimization of its aerodynamics.&nbsp;

MUNICH, Germany – Mini previews its plans for an all-electric version of its modern-day Cooper hardtop with the unveiling of the new Mini Electric Concept.

Set for a public airing at the upcoming Frankfurt motor show, Mini says the compact new 3-door offers a “window into how pure-electric, day-to-day mobility might look in the years ahead.”

The concept combines many of the classic Mini design elements and proportions used by the third-generation Cooper, together with newly developed cues conceived around the new 4-seater’s battery-powered driveline and the optimization of its aerodynamic properties.

The Mini Electric Concept is meant to provide the first clues to the size and appearance of the BMW Group brand’s first series-production EV due out in 2019.

“The systematic electrification of the brand and product portfolio is a mainstay of the BMW Group’s Number One Next strategy,” BMW Chairman Harald Krüger says, adding, “The Mini Electric Concept offers a preview of the all-electric production vehicle.”

Krüger also has announced plans for an electric version of the BMW X3 as part of a program that will see the BMW Group electrify existing models alongside offerings from its dedicated “i” electric-car brand. He hints at larger EV plans for Mini in coming years, saying, “Mini and electrification make a perfect match.”

“It all comes together to make the Mini Electric Concept a highly attractive, zero-emission solution to the current challenges facing personal mobility in our cities and their surroundings.”

However, officials from the traditional British automaker suggest the production version of the new car will borrow electric-drive technology from the newly facelifted BMW i3, with a front-mounted electric motor providing direct drive to the front wheels and a lithium-ion battery pack set within its center tunnel and underneath the rear seat in the place taken up by the fuel tank on combustion-engine versions of the Cooper hardtop.

WardsAuto has been told to expect an overall range in the region of the 94Ah version of the rear-wheel-drive i3, which delivers a claimed 186 miles (300 km) between charges on the current European test cycle.

The Mini Electric Concept is not the first time Mini has sought entry into the EV ranks. It unveiled the Mini E in 2008 as part of an extensive global test program aimed at evaluating technology and gaining driving data in the run-up to the establishment of BMW’s “i” brand. Offered on a lease basis, some 600 Mini Es were deployed in selected cities in China, France, Germany, England and the U.S.

The Mini Electric Concept retains many of the Cooper hatchback’s traditional design cues, including a blanked-off version of its hexagonal-shaped grille, round headlamps, upright glasshouse, floating roof and hatchback-style rear end.

These features are combined with new elements Mini says have been conceived to smooth airflow and improve its aerodynamic properties, including a new front bumper assembly, more heavily flared front wheel houses and complex sills underneath the doors featuring an air breather within the leading section and a winged element at the rear ahead of the rear wheel houses.

“The car’s surfaces have a sense of precision and contemporary clarity about them that lends added impact to the car’s efficient character. Plus, striking accents and vivid contrasts give the exterior that distinctive Mini twist.”

Although BMW’s “i” brand has invested heavily in carbon fiber production for its i3 and i8, the Mini Electric Concept’s body incorporates less-costly glass fiber within its new aerodynamic elements. Riding on 19-in. wheels, its exterior also uses components created via 3-D printing in a move van Hooydonk believes could open up a new market for customization.