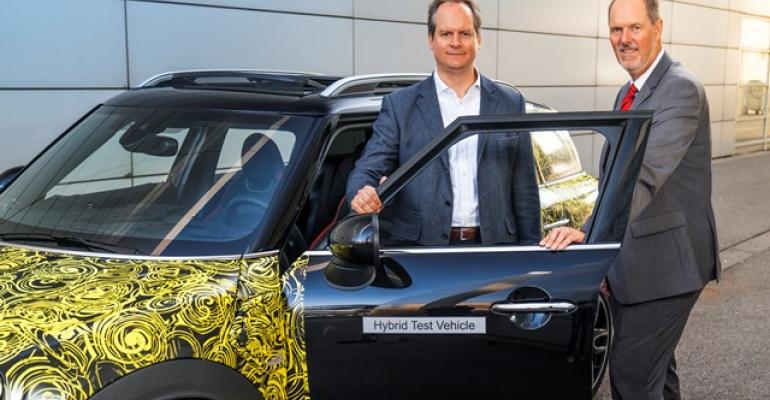 MUNICH – Mini officially acknowledges its second-generation Countryman will offer a gasoline-electric hybrid drivetrain alongside other more conventional 3- and 4-cyl. gasoline engines when it goes on sale in the U.S. next year.

The compact CUV represents Mini’s first foray into the hybrid ranks, offering a glimpse at plans by the BMW-owned British automaker to further diversify its lineup to include alternative drive models, including a full electric version of the Cooper hardtop planned for introduction in 2019.

The Countryman hybrid and BMW 225xe Plug-in Hybrid have been conceived and developed together, sharing the same basic platform and a common driveline based on BMW’s turbocharged 1.5L 3-cyl. gasoline engine and electric motor.

The fundamentals of the system debuted on the BMW i8, although they’ve been turned 180 degrees, with the engine mounted transversely up front and the electric motor mounted within the axle assembly at the rear.

Mini isn’t revealing the official figures for the Countryman hybrid, but engineering sources at BMW suggest similar numbers.
As with the 225xe, Mini has engineered the Countryman hybrid to provide all-electric driving for distances of more than 25 miles (40 km). By combining a front-mounted gasoline engine and rear-mounted electric motor, it offers 4-wheel drive in hybrid mode and rear-wheel drive in electric mode.

The hybrid system provides three driving modes: Auto eDrive, Max eDrive and Save Battery. Making the most of the strong torque qualities and silent operation of the electric motor, the Countryman hybrid is programmed to start in electric mode provided there is sufficient electric charge within its battery.

“With this model we want to convince Mini customers of the benefits of hybrid drive,” says Peter Wolf, head of Mini brand management. “As far as the chassis and suspension are concerned, nothing changes from the conventionally driven variant (of the new Countryman).”

Mini confirms the lithium-ion battery used by the Countryman hybrid fits under the rear seat in a position suggesting its fuel tank will be smaller. The 7.6-kWh battery provides full electric drive up to 50 mph (80 km/h) in Auto eDrive mode and up to 78 mph (126 km/h) in Max eDrive.

Commenting on the vehicle’s capability to run in all-electric mode beyond speeds of rival hybrids, Sebastian Mackensen, senior vice president-Mini, says: “In a hybrid Mini, driving electrically must also be an exhilarating experience. This means that entirely electric driving is not limited to speeds of 19 or 25 mph (30 or 40 km/h), but to speeds well beyond city traffic pace.”

The Countryman Hybrid is not the first Mini model to possess full electric-propulsion capability. That distinction goes to the Mini E, a limited-volume EV based on the second-generation Cooper hatchback offered for short-term lease in 2009.