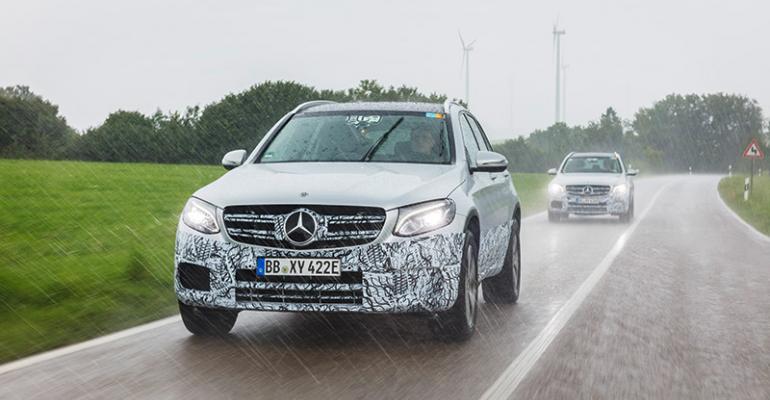 The new model has a range of 310 miles and can be refueled with hydrogen in three minutes, the automaker says.

The new dual-powered model goes on sale in select markets in 2018 following an extensive development program.

The zero-emission GLC F-Cell’s fuel-cell stack was developed by Mercedes-Benz parent Daimler and Ford as part of the Automotive Fuel Cell Cooperation (AFCC) joint venture based in Vancouver, BC, Canada.

Two carbon-fiber-encased tanks mounted within the GLC F-Cell’s floor are used to store up to 8.8 lbs. (4 kg) of hydrogen at 10,150 psi (700 bar). Refilling is said to take three minutes using the latest technology.

Details concerning the output of the fuel-cell stack are being kept under wraps until the F-Cell’s public debut, though Mercedes confirms it will be combined with a 9-kWh lithium-ion battery to provide an overall range of up to 310 miles (500 km), some 31 miles (50 km) of which is claimed to be achievable on the electricity from its battery alone.

As with Mercedes’ existing gasoline-electric hybrids, the battery can be charged by plugging it into an electrical outlet or via energy captured during braking and coasting.

Mercedes says it has covered more than 11 million miles (17.7 million km) in testing during development of the GLC F-Cell. The new model will be available to retail customers.