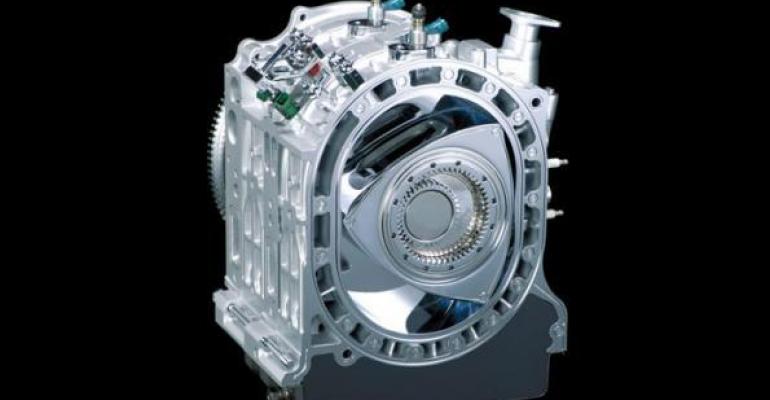 Mazda CEO: Rotary to Return Soon, EV Due Around 2020

The rotary could generate electricity in future propulsion systems, as well as remain a great powertrain for sports cars.

DETROIT – Despite the engine's absence from the U.S. market since 2012, Mazda never quit working on the rotary, a technology it began using in the 1960s.

And the company’s North American president and CEO says the engine, also known as the Wankel after its inventor Felix Wankel, is primed for a return.

“Well, (the) rotary engine is our heart-line,” Masahiro Moro tells WardsAuto on the sidelines of the 2018 Automotive News World Congress. “I think a rotary engine could be a generator in the near-term to contribute to electrification.”

The rotary, while inherently small compared with portlier internal-combustion engines, was dubiously known for its relatively poor fuel efficiency and emissions, leading to its market exit six years ago.

When asked to define near-term, Moro says in a “few years” he expects the rotary will return as part of the propulsion system in joint-venture partner Toyota’s e-Palette autonomous concept unveiled at last week’s CES in Las Vegas.

“Toyota announced the e-Palette. Mazda is a technical partner. That technical (partnership) means they need our rotary range-extender technology,” he says.

Moro says Mazda continues to improve fuel combustion and quality of the rotary, which it last offered in the U.S. in the now-discontinued RX-8 sports car.

The rotary, due to its compact size, still is perfect for sports cars, he says, as well as for use in hydrogen-propulsion systems. Mazda has experimented over the years pairing the rotary with hydrogen, sans using a fuel-cell stack.

While it has a partnership with Toyota to develop electric and electrified vehicles, Mazda, a vocal proponent of the internal-combustion engine and a company that lacks hybrids, has been working on its own EV.

Moro won’t say if the EV will be a pure battery-electric vehicle or partially electrified such as a hybrid, FCV or plug-in hybrid, but he says it will come to the U.S. around 2020 to comply with California Air Resources Board mandates to lower vehicle emissions in the state.

Meanwhile, Moro says Mazda remains “fiercely” independent, and doesn’t wish to become a subsidiary of the much-bigger-by-volume Toyota, as has been speculated. Toyota now has a 5% stake in Mazda.

“No, not at all,” he says of the possibility. “We are really excited right now to grow our business by our initiative. (We are) not chasing volume to become bigger in terms of units of sale. We chose to make people happier with our brand. And that is our brand promise. As long as we have strong fans and supporters, you can be (an attractive) brand in spite of scale.”

Mazda has devised a way to engineer vehicles with limited resources. It has a few thousand engineers vs. Toyota’s tens of thousands.

“Our company is now profitable, reporting record sales on a global basis…we are comfortable with our place in the global auto market” at about 2% market share, he tells the audience here at the auto conference.