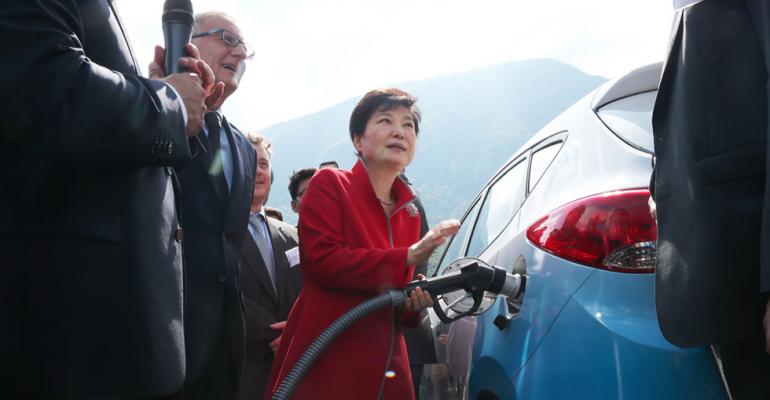 Twenty MOUs are signed between the South Korean and French governments during Park&rsquo;s state visit, calling for technological cooperation in such areas as renewable clean energy and autonomous vehicles.

Park inspects a helium and hydrogen liquefaction facility and a hydrogen recharging station for fuel-cell vehicles during her stay.

She also examines a Hyundai Tucson Fuel Cell taxi and personally refuels it at the station. The process takes only four minutes, giving the vehicle enough hydrogen to travel 373 miles (600 km).

In lockstep with her visit, Hyundai President Chung Jin-haeng and Senior Vice President Lee Ki-sang, who oversees the automaker’s alternative-vehicle development, sign a memorandum of understanding with Air Liquide Chairman and CEO Benoit Potier and President Pierre-Etienne Franc in Grenoble.

The pact pledges to increase cooperation in the development of FCV technology; liquid-hydrogen processing and supply; and expansion of hydrogen refueling stations around the world.

Hyundai began developing FCVs in 1998 and launched the Tucson Fuel Cell in serial production at the Ulsan, Korea, plant in 2013.

Air Liquide operates 75 hydrogen stations in Europe and elsewhere, including five in France. Hyundai is working with the supplier to further refueling-infrastructure development in several countries.

Air Liquide opened one station in the heart of Paris in December during the COP21 UN Climate Change Conference. At the same time, Hyundai delivered five Tucson Fuel Cells to the Societe du Taxis Electrique Parisien (STEP), the largest fuel-cell taxi fleet in the world.

STEP rapidly is expanding the size of the fleet and plans to have 70 fuel-cell taxis in service by the end of this year and several hundred operating within five years. The taxis are painted blue with the name HYPE imprinted in large letters on the side panels, designating Hydrogen Powered Electric.

In addition to the Hyundai-Air Liquide deal inked this weekend, 20 other MOUs are signed between South Korean and French government representatives during Park’s state visit. They call for technological cooperation in several areas, including renewable clean energy and autonomous vehicles.

The visit to Grenoble was personally poignant for Park. She was studying there as a postgraduate electrical engineer in 1974 when she was urgently asked to return to Korea.

Her mother had been killed in an abortive assassination attempt on her father, President Park Chung-hee, and she was needed to take her mother’s place in meetings and at public functions as Korea’s First Lady.