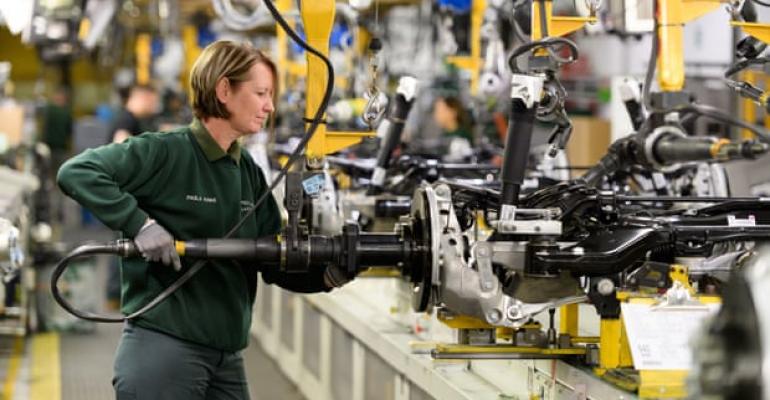 The second electric-powered model to be produced by Jaguar following the 2018 introduction of the I-Pace CUV will be unveiled next year, with North American sales launching in early 2021.

Jaguar Land Rover confirms the next generation of its traditional Jaguar XJ sedan will be a battery-electric model to be assembled at its Castle Bromwich plant in Birmingham, U.K.

It will be the second electric-powered model to be produced by Jaguar following the I-Pace CUV introduced in 2018.

The financially embattled automaker, which racked up losses of £3.7 billion ($4.5 billion) in 2018, makes the announcement on the future of its flagship 4-door July 5, the last day of  production of the last combustion-engine XJ at Castle Bromwich.

It comes after a 51-year production run for gasoline and diesel variants of the XJ sedan, which entered the Jaguar lineup in 1968. A total of 1,037,178 XJs have been produced since then.

The new all-electric XJ will be unveiled next year, with North American sales launching in early 2021.

“The future of mobility is electric, and we are committed to making our next generation of zero-emission vehicles in the United Kingdom,” says Ralf Speth, CEO of JLR.

The new XJ will be the first electric model to be produced at Castle Bromwich, but Jaguar says it plans “a range of new electrified vehicles” to be manufactured at the plant as part of a turnaround strategy following heavy losses in 2018.

Rumors suggesting the Jaguar XJ was planned to switch to all-electric power have been circulating for some time. However, last week’s announcement marks JLR’s first official confirmation of the move, which will see the new sedan compete directly with the Tesla Model S.

JLR says the new XJ will “build on the characteristics synonymous with its predecessors – beautiful design, intelligent performance and revered luxury,” adding it will be built by the same “expert team of designers and product development specialists responsible for delivering the I-Pace.”

The electric XJ announcement comes after JLR confirmed it would establish both a battery assembly center in Hams Hall and electric driveline unit production line at its Wolverhampton engine manufacturing center, both in the U.K.

“We are co-locating our electric-vehicle manufacture, electronic drive units and battery assembly to create a powerhouse of electrification,” Speth says.

JLR, which cut 4,500 jobs in early 2019 as part of a series of cost-cutting measures, says the news “safeguards several thousand jobs in the United Kingdom.”

Renovations at the Castle Bromwich factory are to begin later this month at a cost of up to £1 billion ($1.25 billion). The investment is meant to support the production of Jaguar’s next generation of gasoline and diesel models alongside electrified hybrid and all-electric models.