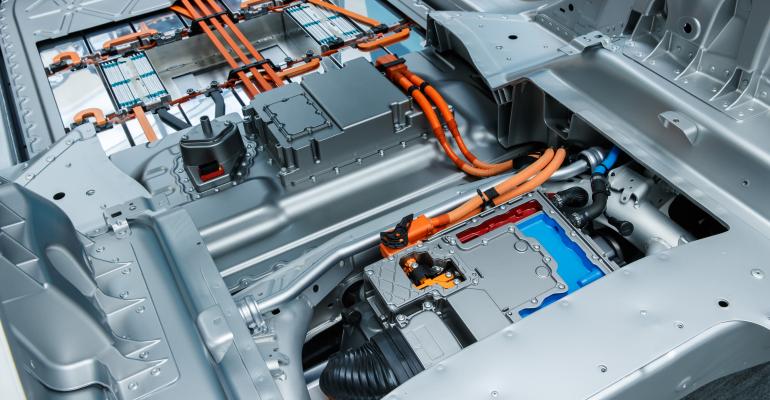 The I-Pace project arguably vaults the relatively tiny JLR engineering group to among the leaders in EV R&D.

PORTIMÃO, Portugal – The electric-drive system within the ’19 Jaguar I-Pace marks a distinct shift for a British brand known for its roaring gasoline engines, and the technology is expected to migrate to future products.

“That is the plan,” says Simon Patel, senior program manager-powertrain for the I-Pace, which is priced from $69,500.

In addition to the hardware, such as the 90-kWh lithium-ion battery pack and synchronous permanent magnet motors, other future Jaguar Land Rover products will benefit from software written for the I-Pace.

For example, the I-Pace’s Vehicle Supervisory Controller, which oversees vehicle performance, energy management and drivability, already is shared with the Range Rover plug-in hybrid electric vehicle. The controller was designed from the beginning for multiple applications to slash development time and cost.

“It is a scalable (electrification) architecture that could be put into just about anything,” Patel tells WardsAuto on the sidelines of media test drives here for the I-Pace.

The battery also can be preconditioned to optimal operating temperature during the charging process to maximize range.

The electric motors are packaged concentrically with a single-speed transmission for compactness. Positioned at each axle, they provide all-wheel drive. Together with the battery pack, which pushes the 5-passenger CUV to more than 4,700 lbs. (2,132 kg), the motors’ positioning provides the I-Pace with a low center of gravity for reduced body roll and 50:50 weight distribution from front to rear.

American Axle supplies the motors, although, like the battery packs, they were built to Jaguar specifications. Ten patents are pending on the motors alone.

Regenerative braking recoups up to 0.4G of braking force and in high mode enables single-pedal driving.

While near-silent running may be new to Jaguar, the brand retains its familiar torque. A whopping 512 lb.-ft. (694 Nm) can be sent instantaneously through the I-Pace’s four wheels to surpass even the creamiest V-12 and V-8 internal-combustion engines from the brand. The car moves 0-60 mph (97 km) in as little as 4.5 seconds.

Designed as an EV from outset, engineering took place over four years at JLR centers in Whitley and Gaydon, U.K, although the automaker’s electrification group dates back 10 years. The project arguably vaults the relatively tiny JLR engineering group to among the leaders in EV R&D, which includes companies such as California startup Tesla and global heavyweight General Motors.

“The concept was so amazing, we just had to pull it off,” Patel says, recalling the C-X75 electric concept car from Jaguar and the Williams F1 Formula 1 team. The 2-seater bowed at the 2010 Paris auto show and was famously featured in the James Bond film “Spectre” in 2015.

Patel credits a small, nimble and tightly knit group of engineers for quickly churning out a relatively affordable, zero-emission car faster than competitors with 10 times the engineering resources. But his favorite part of the car?

“The speed,” he says. “Instant power that never fails to put a smile on my face.”