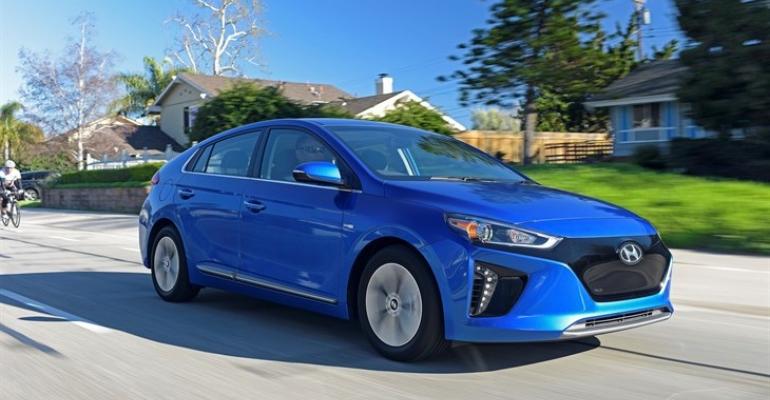 Ioniq a Slow Seller? Not Quite, Says Hyundai

The Korean automaker is planning more electrified models for the U.S., hinting a number will be for the in-demand light-truck sector.

But that meager volume is a result of not enough inventory to meet demand, says Mike O’Brien, vice president-product, corporate and digital planning for Hyundai Motor America.

“Our biggest problem with Ioniq is we don’t have enough of them,” he tells WardsAuto in an interview here. “I think our only problem right now is insufficient supply.”

He says the inventory gap is most acute with the Ioniq electric model, which is “sold out” because Hyundai didn’t “forecast robustly enough.” Dealer inventory searches on Cars.com within 200 miles (322 km) of Los Angeles and San Francisco confirms this assertion, showing zero units available.

The Ioniq EV, sold only in California, began arriving at dealers in April, two months after the 50-state hybrid’s debut. Some 94 of the 4,881 Ioniqs sold this year are EVs. A plug-in hybrid variant of the Ioniq goes on sale this fall.

“We need more (Ioniq EVs),” O’Brien says. “And frankly…we could increase our volume of Ioniq Hybrid quite a bit more – we’re lacking in supply for those.”

A 46-day supply is an improvement, however, from May’s 37 days, although a bit below April’s 51 days’ supply.

A low days’ supply doesn’t always equate to low sales, however. The Toyota RAV4 Hybrid, the third-best-selling hybrid in the U.S. so far this year, tallied 20,770 units in the first half of 2017 with a days’ supply below the industry average for light trucks in most months this year.

The Niro hybrid CUV from Hyundai’s sister-brand Kia, which rides on the same platform as the Ioniq, tallied 12,767 sales through June, also with a below-industry-average days’ supply in recent months.

It is unclear what the U.S. allocation is for the Ioniq, as Hyundai has been mum on its U.S. sales target for the car. The model is assembled for global markets at Hyundai’s Ulsan, South Korea, plant.

Korean media reported last month Hyundai will raise Ioniq EV monthly output at Ulsan, from 1,200 to 1,800 and with half of the units bound for markets outside Korea.

O’Brien is keen to note the Toyota Prius is the top trade-in for the Ioniq. While this isn’t a huge surprise, given the Prius has been the No.1-selling hybrid in the U.S. for years, he thinks it indicates waning loyalty for Toyota’s best-known green car.

“That says a lot. Four generations (of Prius), very happy, very satisfied customers that are repeat Prius buyers and our No.1 inflow is Prius,” he says.

Since the U.S. debut of the fourth-generation Prius in January 2016, sales of the car have been down nearly every month since, sounding alarm bells in the industry that the model’s best days may be behind it. Prius sales through June, which include the liftback, V wagon and Prime PHEV totaled 48,050, 13.9% below like-2016’s total.

The Prius’ aggressive styling has been cited as a possible reason for its decline, and O’Brien thinks Hyundai has a design advantage, calling the Ioniq “not way out there” but “futuristic in its own way.”

However, he believes the Ioniq’s specifications are the key motivating sales factors.

“I think the numbers are one of the biggest things that has helped us out,” he says. “It has caused people to take notice.”

Hyundai at launch undercut the Prius on MSRP, but the latter now has incentives that have brought pricing of the two closer together. The Ioniq also has incentives in most major U.S. metros, Edmunds.com shows. In Los Angeles, prospective buyers can get from $400 to $2,000 cash back, or 0% financing for up to 60 months.

The No.2 and No.3 most-traded-in models for the Ioniq are Hyundai’s own Sonata midsize and Elantra compact cars, which O’Brien views as a win despite the cannibalization.

“In the end, where would these buyers have gone before? Maybe they would have bought a Prius? We know any time you keep make loyalty up, that’s in the net good.”

Meanwhile, O’Brien hints Hyundai will sell a battery-electric version of the new Kona subcompact CUV in the U.S. The model is due in Korea next year, with a reported 217-mile (349-km) range.

CUVs are where the volume is this year in the U.S. CUV is the No.1 segment with 2.8 million sales through June, well above the next highest segment, Small Car, which tallied 1.3 million sales in the year’s first half.

However, O’Brien believes sales of EVs won’t take off until there is sufficient public charging available, especially when considering the need to recharge 200-mile-range batteries.

“Everybody has taken the position that everybody has a wall socket in their house, but obviously for a BEV that can take more than a day for many vehicles, sometimes two or three days. So it’s not a practical solution.”

Commercial buildings with 3-phase electric power, such as grocery stores, can install fast-charging stations with relatively minimal cost, he says.