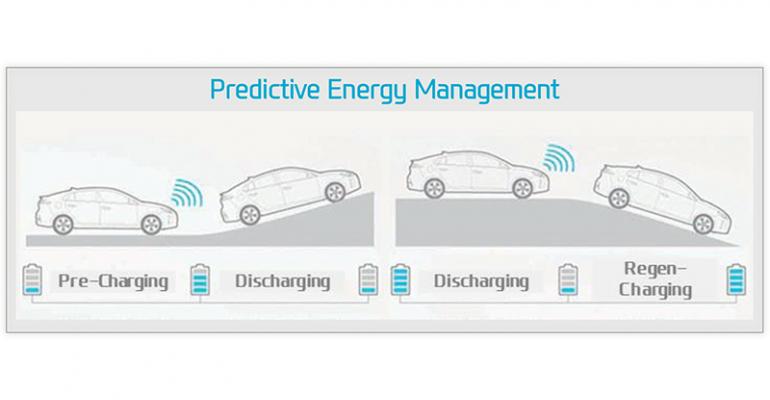 Tapping into topography data from the navigation system, the hybrid-electric model can better allocate its energy for maximized efficiency, executives say.

GOLETA, CA – Launching with the new Hyundai Ioniq hybrid and plug-in hybrid is a predictive mapping system that aims to minimize energy usage.

Dubbed ECO-DAS (Driving Assistant System), it uses 3D mapping data when a route is specified in the car’s navigation system to set a just-right mix of power from the battery and fuel from the engine.

“With a hybrid we’re constantly mixing gasoline energy with electric energy to propel the vehicle,” says Mike O’Brien, vice president-corporate, product and digital planning at Hyundai Motor America. “If we know the topography, we know when we’re going to crest the hill, we know how much battery side to use and we know how much gasoline to use.

“And then on the other side of the hill we know how much regeneration we’re going to get, so we calculate the mix in terms of battery propulsion and gasoline propulsion,” O’Brien says at an Ioniq media preview here.

Without ECO-DAS, Glenn Kim, team leader for eco-technology at Hyundai in Korea, says the automaker has to manage the battery at a certain level to account for unknown factors in travel routes.

Giving an example of 50% battery power needing to be available at all times, Kim says, “If Ioniq knows where the top point is and where the down (slope) is, and where the current curvature (is), we can use (less) electric energy. Instead of 50%, maybe 10%. (The car) knows, ‘I can recharge the battery in the future, downhill.’ That’s the simple idea.”

Audi uses a similar topographical mapping system, dubbed predictive energy assistant, in its Q7. However, it works to save fuel without needing to set a destination in the CUV’s navigation system, Audi says.

The Ioniq hybrid is arriving this month at U.S. Hyundai dealers, while the Ioniq PHEV will launch in the fall. It will be stocked at Hyundai’s California dealers, but officials here say anyone in the U.S. wanting one can place an order with their local Hyundai dealer.

Meanwhile, as it does with its Sonata Hybrid and Sonata PHEV, Hyundai is offering a lifetime battery warranty for the lithium-ion pack in the Ioniq hybrid and PHEV, as well as the EV model going on sale in April in California.

While the warranty currently is not transferrable beyond an Ioniq’s original owner, Hyundai is exploring making it available to a second owner if they purchase a certified pre-owned Ioniq from a Hyundai dealer.

A transferrable warranty is seen as a way to possibly stem the residual-value losses that happen to most green cars when they hit the used market.

“Clearly if you look at residual values for some of these vehicles out there, (they’re) not keeping step with gasoline vehicles and we know that,” O’Brien says. “So we are studying the CPO idea, which is allowing the next customer, if they buy a certified pre-owned Ioniq, (to) get the warranty extended.”

Hyundai is trying to make the Ioniq as attractive as possible to potential customers, given stricter fuel economy and emissions regulations are just around the corner while green-car acceptance by Americans has been slow.

The federal government has set a fleet fuel-economy average of 54.5 mpg (4.3 L/100 km) for 2025, the same year the California Air Resources Board has said 22% of light vehicles sold in the state must be zero-emissions (all-electric or fuel-cell) vehicles.

“Ioniq will be sold past 2020,” O’Brien says. “All the gains manufacturers make in vehicle technology happen with their major model introductions. Very little happens during the lifecycle of that vehicle. So we’ve got one more lifecycle to go before (the) fleet average of 54.5 kicks in. There’s a lot of work that has to happen (in a short period of time).”

Hyundai has promised 14 green cars by 2020, 26 if including sister brand Kia. Among the 26 are all-new models, while others, such as the Ioniq hybrid and Kia’s Soul EV, already are on sale. Hyundai was one of 18 automakers signing its name to a letter sent two weeks ago to President Trump asking for a revision of 2025 CAFE goals on the premise the EPA completed a midterm review too early. The review period was to last until April 2018, but the EPA accelerated the timetable to November and locked in the rule in early January, shortly before former President Obama’s departure.