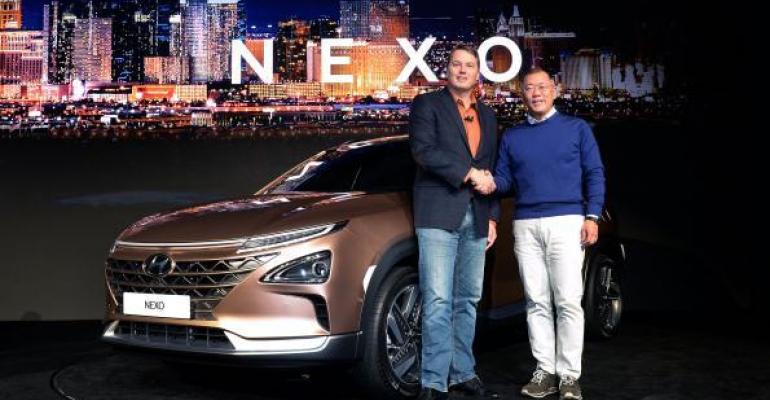 Hyundai plans to launch its Nexo hydrogen fuel-cell electric vehicle in Korea in March, when it will begin taking orders for the replacement of the Tucson FCEV, WardsAuto has learned.

The Nexo was a show-stopper in January at the CES in Las Vegas, where the CUV was unveiled by the heir apparent to Hyundai Motor, vice chairman Chung Eui-sun. Chung discussed both the advanced features of the new FCEV and a linkup with U.S. technology startup Aurora Innovation to use the vehicle as a test bed for commercially available autonomous vehicles.

A Hyundai spokesman tells WardsAuto the automaker has targeted 2018 global sales of 3,000 Nexo vehicles, more than 12 times the number of Tucson FCEVs sold worldwide last year. The sales target for Korea or other individual markets is not being disclosed, but last year 60 units of the Tucson FCEV were sold in Korea and 232 units were sold globally, including Korea.

The spokesman notes the actual cost to consumers will be considerably less than the list price.

“Pricing and other details will be confirmed by individual markets closer to the vehicle’s on-sale date, but local incentive and subsidy programs will make it cost-competitive with today’s hybrids,” the spokesman says.

The Korean government offers a subsidy of about 26,000 won ($24,000) for FCEV purchases. Its aggressive incentive programs are designed to help put 9,000 FCEVs on Korean roads by 2020.

Developed mostly at Hyundai’s R&D research center in Namyang, Korea, the Nexo is being assembled only in Korea on a dedicated line at a plant in the Ulsan vehicle-development center. It will be exported to all other world markets.

Hyundai has leased more than 150 Tucson FCEVs to customers in the U.S. since the CUV debuted there in 2014. All the leases have been in California, where about 33 hydrogen refueling stations operate.

Hyundai is working with governments and other sources around the world to open more hydrogen refueling stations. The Korean government is committed to having 100 stations operating nationally by 2020 and more than double that number by 2025.