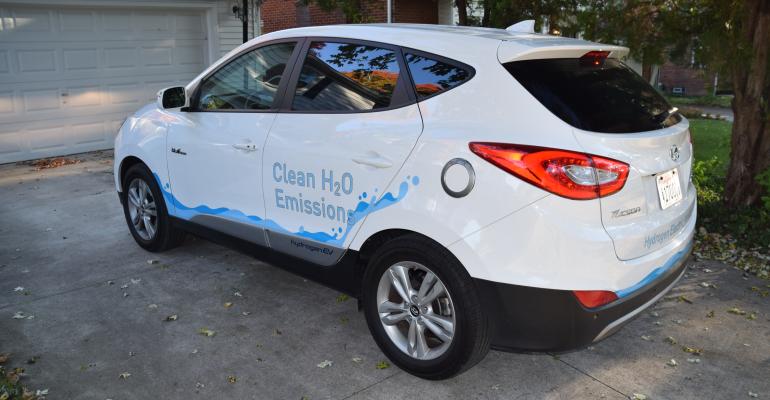 The paucity of recharge stations still is seen as a major problem, with only 10 available throughout Korea. The government says it will increase the number of stations to 80 by the end of 2020, and to 520 by 2030.

Hyundai signs an agreement with the Korean government to supply 35 Tucson ix fuel-cell electric vehicles for use as taxis and car-sharing fleets in two major cities.

The automaker also signs a contract this week to supply 20 of its next-generation versions of the FCEV, scheduled for launch in 2018, to the Australia Capital Region government.

Another 15 Tucson ix FCEVs will be sold to J’Car, a startup company in Gwangju, to be used in its car-sharing program. The vehicles will be delivered in November.

The agreement between Hyundai, the municipal governments of Ulsan and nearby Gwangju, and two private companies calls for Hyundai  to provide 10 Tucson ix FCEVs (called Hyundai Tucson Fuel Cell in the U.S.) in December for use as taxis, followed by another five units in first-half 2017. Five units also will be supplied to a taxi company in Gwangju in 2017.

The company plans to have 80 of Hyundai FCEVs in operation by 2018, including the current Tucson ix and its replacement launching in 2018. By 2020 J’Car plans to have 150 of the Hyundai cars on the road.

“We hope through these programs that the public can experience the eco-friendliness and the safety of hydrogen fuel-cell cars more closely,” Chung Jin-haeng, Hyundai president in charge of planning and coordination, says during a ceremony at which memorandums of understanding are signed.

He also says Hyundai will intensify its FCEV R&D programs, which recently yielded a new, Korean-developed and -produced membrane electrode assembly. The thin film component in the electrode stack is vital in generating power from the stimulated reaction of oxygen and hydrogen molecules.

The Hyundai assembly is said to be more efficient and significantly lower in cost than the membrane assemblies currently imported from Gore in Japan and 3M in the U.S.

The Korean government announced a plan at the end of 2015 to offer incentives and other measures to drop the price of Hyundai’s FCEVs from about $72,000 currently to about $30,000 in 2018, when the advanced new Hyundai model rolls out.

However, the paucity of hydrogen-fueling stations still is seen as a major problem. Only 10 are available throughout the country. The government says it will increase the number of stations to 80 by the end of 2020, and to 520 by 2030.

Ulsan, where the vehicles are produced and where the first taxi fleet will operate, has only one hydrogen-fueling station. Hyundai plans to add two more in 2017.